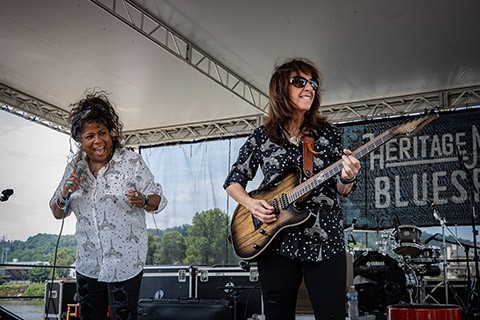 It can be little bit difficult to get to, for those arriving from out-of-state, but the Heritage Music Bluesfest in Wheeling, West Virginia, is always worth the trip. Held on a beautiful setting in a waterfront park on the Ohio River, this festival consistently features an excellent lineup, with a second smaller stage featuring lesser-known artists playing in-between the sets of the main stage. One reason it was extra-special this year is that producer, Bruce Wheeler, was celebrating the 20th anniversary of the festival. That, combined with thousands of fans who had been starved of live music for many COVID months, led to an even more joyous event than usual. 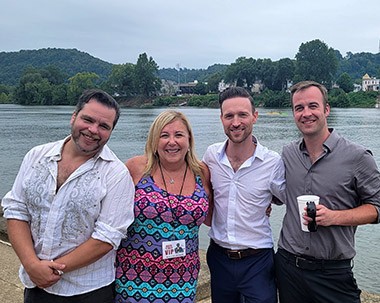 Beth Rudolph, promoter at the Funky Biscuit, made the trip. She noted that as someone “who is always able to be surrounded by some of the best musicians playing at the best music venue in South Florida, I constantly say, ‘why go anywhere else in the world to see music?’ We have a small setting with great sound, and we all get up close and personal with the artists coming through the door. And I was a little nervous about what it might be like with COVID. But I felt like I was in heaven. I’m glad I put aside my fears and came to this festival to do the thing I love—listening and promoting live music!”

It is somewhat unusual for a blues festival to open with an internationally known act, but those who arrived early to the festival were treated to just that with Davy Knowles (formerly of Back Door Slam). However, just as he was finishing his flawless set, the sky became very dark, and the audience quickly emptied the park seeking shelter from the rapidly approaching storm. But being devoted fans, they did not give up, and continued to watch the Facebook page to know just when to return not to miss a minute of the music. Their perseverance was rewarded with shortened sets which allowed Carolyn Wonderland, Ronnie Baker Brooks and Coco Montoya to all have the opportunity to play in the time remaining. There was even time for a short tribute to Master of the Telecaster, Albert Collins, by Brooks and Montoya. Bruce Wheeler had stated that there were only some things you can control in a festival, and weather is not one of them. However, his solution to the crisis definitely pleased the audience.

Almost as great as the lineups on the mainstage are this festival’s after-jams, and Friday’s jam was led by Davy Knowles in the historic McLure Hotel ballroom. The magic really intensified when the remarkable Ronnie Earl showed up to jam. The audience swarmed to the dance floor to be close to the stage as he mesmerized them with his highly emotional style of playing, and a special moment occurred when Knowles joined Earl to jam. As Knowles later stated, “it was a pleasure and a real honor to be able to play” with such an icon. 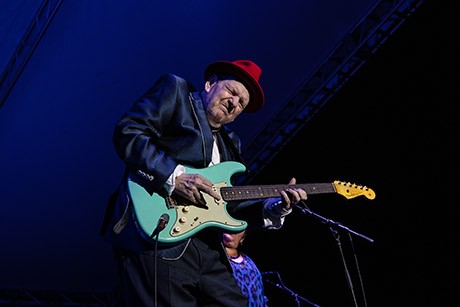 The weather was beautiful for the second day of the festival, with some favorites (like Nick Schnebelen and Indigenous) and a few acts that might be new to many, (like Soulful Femme and Hannah Wicklund). Gumbo, Grits & Gravy (with Anne Harris, Guy Davis, and Marcella Simien) and the duo Jason Ricci and JJ Appleton added their unique musical interpretations to that day’s lineup. Those who were unfortunate enough to have missed Ronnie Earl in the after-jam the night before were pleased that he was the closing act for the night, this time appearing with his whole band, including the dynamic Diane Blue on vocals. That night the after-jam was hosted by Nick Schnebelen, who did an excellent job of combining various artists to play together. Earl, who had expressed a desire to play with Ricci during his set on the mainstage, had that opportunity during the after jam, and their seemingly mutual admiration for each other seemed to bring out the best in both artists. The enthusiasm was so great for this event, that it lasted well past 2 am.

The final day remained just as strong beginning with the first act, IBC winners Horojo Trio, followed by the extremely talented young musicians from Ruf Records, (Jeremiah Johnson, Whitney Shay, Ryan Perry, Pal Niehaus and Tony Antonelli). However, the highlight of the day for many was the Gypsy Blue Revue, led by JP Soars and featuring Anne Harris on violin and Jason Ricci on harmonica. Their high-energy combination of gypsy jazz, jazz, Latin rhythm, and blues, along with Harris’ graceful dance moves thrilled the audience and received such an enthusiastic response, that it seemed to be an act almost impossible to follow. However, crowd favorite Ana Popovic was undaunted, and as usual, she did not disappoint her fans. 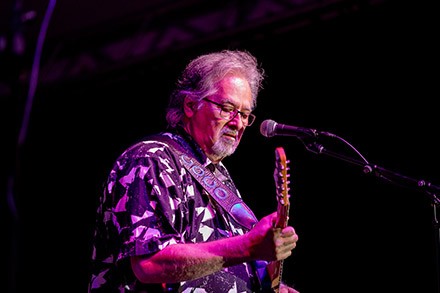 At nearly 87 years of age, one would expect headliner Bobby Rush to perhaps have difficulty with a late time slot, but that assumption would have been incorrect. Dancing onto the stage with more energy than singers half his age, he quickly proved that he has not lost any vocal power, and he even demonstrated his skill at rapping. As expected, he clowned suggestively with dancer Mizz Lowe, and a truly special moment occurred when he called Anne Harris up onstage for a comparison between her belly-dance-influenced steps and Mizz Lowe’s trademark moves. The after-jam was a bit shorter this night, and as expected some members of the audience ran out of fuel and did not attend. But the die-hard fans who made it were treated to JP Soars and members of the Ruf Record label joining the Horojo Trio.

For many in the audience (and even some of the musicians), this was their first blues festival since COVID hit, and it was a wonderful re-entry. Jason Ricci, summarized the experience nicely. “The Wheeling Bluesfest every year is always amazing, with a diverse lineup and beautiful West Virginia backdrop. It is always expertly run, but this year’s 20th anniversary was really exceptional for me. Getting to play two days and with such different bands was incredible, but also jamming with my childhood guitar hero, Ronnie Earl, was absolutely surreal! Nick Schnebelen was a rock-solid act and a perfect jam host, and his Kansas City band was pumping! I know JP Soars, JJ Appleton and Anne Harris all had an incredible couple of days with one of the best audiences anywhere!”

Other musicians also weighed in on their joy at being back on the road. As quoted to Beth Rudolph, Adam Hagerman (drummer for Nick Schnebelen) described how the COVID experience was “weird—going from 26 years on the road to nothing. I missed the folks that we meet and how these folks become our friends. It’s not the same when you play on camera in Kansas City to nobody.” Cheryl Rinovato (from Soul Femme) agreed adding, “we missed the love and energy that our audiences give us. Charlie Barath described how he “used to observe as a listener and now, as a musician, I grab onto what the people send out to me.” And Anne Harris confirmed similar sentiments, noting “what I missed most about playing in front of live audiences is playing in front of live audiences! But seriously, that’s the answer—the live experience is just that. It is an experience that will never be replicated. All those elements that come together in a special way, do it one time only. It’s magical and can be transformative.”

So, while there are many things to love about hearing musicians in small, intimate venues, there is nothing quite like being surrounded by thousands of people all giving off electrifying energy. And the marathon experience of hearing wonderful musicians back-to-back, followed by unique jam opportunities which extend into the early morning can transport fans into a wonderful, altered state of consciousness. They are transfixed, exhausted, yet still wanting more. That is an experience that Bruce Wheeler appears to have mastered delivering, so it was not surprising to see that most of the fans staying at the McLure Hotel quickly turned in their forms to try to reserve a hotel room for next year’s event, even before knowing who might be listed in the line-up. I was among them.