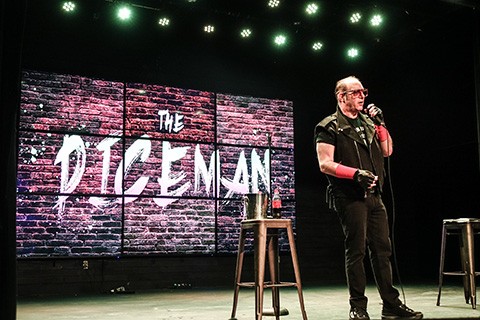 On the night before Valentine’s Day, the legendary Andrew Dice Clay had spectators rolling in the new Black Box in Lake Park. Black Box features two life-sized photos in the lobby, one of Mick Jagger and the other of the foul-mouthed comedian. We all remember Dice blowing up in the Nineties with his dirty nursery rhythms. He then sold out Madison Square Garden, got banned from MTV and starred in blockbusters, like The Adventures of Ford Fairlane and the more recent A Star Is Born.

Decades later, the 63-year-old movie star wore all black, from his jeans and t-shirt to a jacket and fingerless gloves. The funny man wore red wristbands and thick glasses as well. It was the same Dice we all knew 30 years ago, just without the thick black pompadour. The man held a cigarette all night, even if it was never lit. No worries, as he hadn’t lost a step. Dice mentioned how glad he was to be onstage in the new club. Approximately 100 middle-aged guests were spaced out in the intimate venue, which quickly made the 22-year-old kid in the front row an easy target. 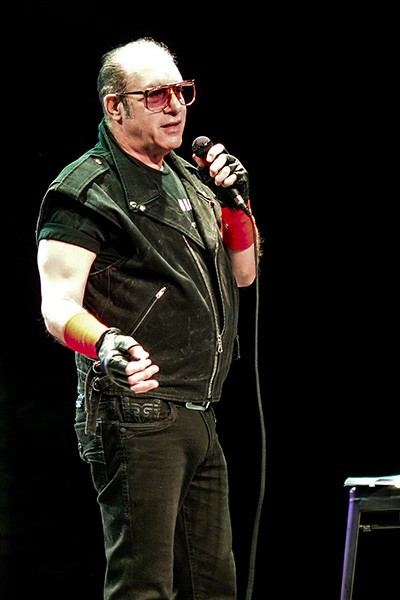 The Diceman started the show by discussing life during the “fungus,” a.k.a. the coronavirus “pandemical.” He described buying toilet paper in the streets that fell off a truck. New bits included everything from “transtesticle” Bruce Jenner to marriage and talking dirty in bed. Audience members received romantic pointers for Valentine’s Day, like adventurous positions in the bedroom. “One leg up. One leg up.” Other topics discussed include the brutal humidity, the Kardashians, and how “Everyone’s got diabetes these days.” He claimed that doctors are full of it, as he drank from a big bottle of Coke-a-Cola all night.

Forget Hallmark, because Dice concluded the memorable evening with some old school classics, such as “Humpty Dumpty” and “Hickory Dickory Dock.” He also had a new notebook full of beloved poetry for all occasions. Rhythms included Valentine’s, Easter and “Happy Anniversary stupid.” Finally, he gave thanks for filthy skanks and apologized for getting out of line with your sister. In 2012, Dice told CNN, “I’ve been getting in trouble my whole life and I really don’t care what anybody thinks of what I do on stage as a comic.” But damn, he was hilarious in South Florida.