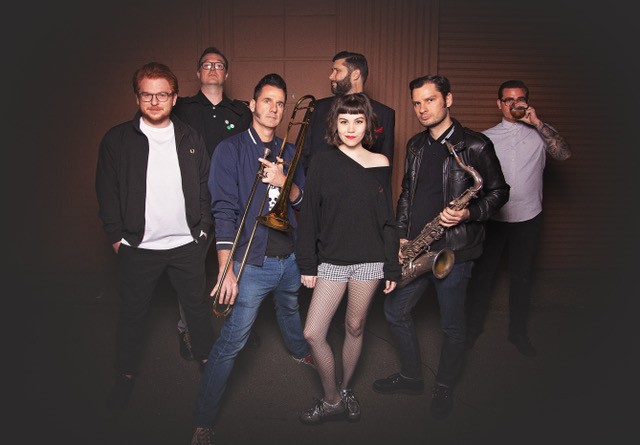 Movies have a profound effect on people for many reasons, but for Singer/Songwriter Tahlena Chikami, one movie released in 2001 truly affected her life. Having the opportunity to chat with her during this COVID-19 pandemic, she explained this phenomenon, revealed how her band came to be and what fans can look forward to in the coming days with this amazingly talented ska band.

SFL Music: How did Bite Me Bambi come together? Love the name!

Tahlena Chikami: Oh, thank you. Bite me Bambi sort of started back in like 2018 when Brian Mashburn (guitarist) who was in Circa at the time, formally Save Ferris. He and I started getting together to write some music and we were really having a good time writing songs, and we were like, hey. Who else should we pull in on this crazy idea? We started forming the band from there. So, it’s not a really crazy story but it’s the truth. (she laughed).

SFL Music: That’s cool. How did you guys decide on the band name? What inspired it?

Chikami: Yeah actually, it’s the quote from the Josie and the Pussycats movie in the early 2000’s. I don’t know if you’re familiar with that. It had like a weird cult following, but I saw that when I was a kid and it was the movie that made me want to be a musician and be in a band. So, when we couldn’t think of a band name, I started looking through the scripts and one of the characters goes, oh, bite me Bambi. I was like, that’s it! So, that’s what we went with.

SFL Music: You’re an actress as well. You were in a couple of movies (Faking It and I kissed A Vampire as well as shows Parks and Recreation and Gilmore Girls). How did that come about? Did you start at an early age? Was there something that inspired you to get into acting and singing?

Chikami: Well according to my parents I’ve always been a ham. Around the age of nine I ended up doing musical theater. I was that kid, and so I did that for a long time. Then when I was about fifteen a friend of a friend got me an interview with his agent and that’s how I got my first agent. So, I started acting on TV and movies and I did that up until pretty recently. I’ve kind of taken a step back to focus more on music, but it was a super fun time when I was doing it, and I really enjoy it still to this day.

SFL Music: How did you get into music? When you were in Musical Theater you probably had theory and all of that stuff. Did you take music lessons on your own?

Chikami: Yeah, my parents are really responsible for my musical taste. I’m really lucky. I think they have good taste and now it’s my taste (she chuckled). My parents were younger during the nineties. They were like in their early twenties. So, I grew up in a house that was playing like two-tone ska music and Green Day. Also, classics like The Beatles and stuff like that. So, my parents really influenced me and we always had music on. If we were cleaning the house, we had music on. If we were hanging out on a Friday night eating pizza, we had music on. Then as I got older and I got involved in musical theater, my parents put me in voice lessons which, super helpful, and that’s where I got a lot of theory and stuff like that.

SFL Music: Do you have other musical influences besides the ones you mentioned?

SFL Music: They should!

Chikami: Then there’s Pink. My mom and I got really into Pink and I just love her voice and how strong and powerful she is, and so I draw on inspiration from her as well.

SFL Music: Is that where you get some ideas for your music? What inspires your music?

Chikami: It’s mostly Brian Mashburn and myself who write the music and we just draw a lot on older. We’re really big fans of two-tone ska, 60’s ska, rocksteady, and we like to have sort of that mixed with more of a poppier influence. You know, that have catchy melodies, and we like to have songs that will get stuck in people’s heads (she laughed).

SFL Music: I definitely can see that. I love the video “Hot Lava.” Looks like you put some of your acting skills into that video.

SFL Music: How did that come about? Did you have that idea?

Chikami: You know, what’s funny is, we had been working on that video for a while. We were really excited about the song. We wanted a really good video idea, and out of nowhere, we were sitting in a meeting with our director Chris Graue and I go, what if I’m in a library dancing on a table? We had no idea what we were doing. I just blurted it out and we sort of just started running with it from there. Chris was like, I like that idea! That’s interesting. So, we just sort of snowballed from there with everybody in the band coming up with ideas and stuff and Chris came up with that really great script, and then we were super stoked when we read it, and we were really excited to do it. We’re really happy with how it turned out. It was super fun.

SFL Music: What can fans look forward to with the show?

Chikami: We really like to have an exciting live show. You know, you can listen to music in your home and that’s cool and that’s one experience, but you get out there, at a ska show with your friends or with people you’re just meeting for the first time. Ska is a big family. Everybody welcomes everybody. You dance. We like to be exciting. High energy, and really get the crowd involved, you know, clapping, singing, dancing. We’re all about high energy.

SFL Music: What advice would you give to a new band coming up or a new musician?

Chikami: That’s a good question. I would say, find what you love and do that. Don’t try and chase what you think is popular. I mean with ska, like I would play ska if nobody was listening to ska or if everybody’s listening to ska. I love to play. It’s music I love listening to, and I think when you find your people in that scene, they’re excited to have somebody playing what they love, what they enjoy, and if you find those people, you’ll always be able to have a good time, have a good show, and everybody’s just grateful that we’re all in it together. So, I think that would be my advice really. Just do what’s genuinely you and what you love because chasing the latest trend, that’s gonna come and go. So, when you find your people, like that’s a sweet spot.

SFL Music: What are you doing with this downtime so to speak since you can’t be out playing?

Chikami: Yeah, with seven people in this ska band, we’re not even allowed to be in the same room together (she chuckled). So, we’ve been working on some different ideas. One of the things we did recently was we post our Instagram asking for cover requests from fans, and so everybody through out, they ran the gamut. It was very interesting. So, we picked a couple and we’re working on some arrangements and going to get a video out hopefully soon to everybody. We’re trying to work on writing new music. I mean we might as well take the time since we’ve got nothing else going on. We’re actually talking about new merch ideas too which has been kind of cool to catch up on. On some things like that, designing merch and what not.

SFL Music: Are you guys working on a new album? New songs?

Chikami: Yeah, we have some songs that we want to get more videos out for. We’ve really been enjoying this whole one video, one song kind of thing. It’s cool to have a visual representation of the song, be it lyric, video or full-blown music video. So, we’ve been in talk with Chris who has done all of our music videos so far, about some ideas so, once this whole thing is done, we can start getting right back to work and getting new stuff out for everybody.

SFL Music: Is there any place in particular you are looking forward to playing?

Chikami: Yeah. We’re hoping to hit the road again soon and we’re hoping to get farther reaching then we ever have before. We’ve only done little trips so we’re hoping for a big tour this year. That is our hope. Once all of this is done, we’ll be able to finalize all that good stuff.

SFL Music: Well, fans are looking forward to seeing the live show. Is there anything else you want fans to know about what Bite Me Bambi is doing now?

Chikami: I would just say right now, just follow us on our social media. We’re trying to keep posting fun and interesting stuff, and then hopefully soon we’ll have a brand-new video once we can all be in one room together (she chuckled).