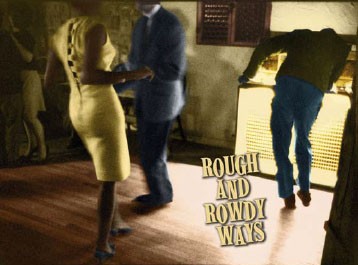 Bob Dylan didn’t win a Nobel Prize in Literature in 2016 for nothing. His new album, Rough and Rowdy Ways, released on June 19, is lyrically brilliant in a way that only an artistically genius mind can go. There is only one Bob Dylan and he is shining brightly like a diamond after releasing his 39th album and first original album in eight years, since 2012’s Tempest. After that, he released three cover albums of American Standards, heavy on Frank Sinatra; now, at age 79, he wakes us up with a fascinating gem of all original masterpieces that are wordier than the Bible. Not at all resembling his 1960’s folky beginnings, it is bluesy cool and smooth with a musical beauty that contrasts his rough and somewhat improved ragged voice. His phrasing and delivery are so good that the words jump out and come alive. It’s a beautiful reflection by a wise and experienced modern-day poet who is as relevant and demented as ever. On first listen, most people will miss much of what he is saying because it is so jam packed with references (songs, books and film) from every which way but loose. Luckily, there is google to help figure it out and die-hard fans will want to explore it. Looking at the lyrics is vital to solving the Dylan puzzle. “Every line has a particular purpose” Dylan told the New York Times.

How many artists have college courses dedicated to studying their work? Of course, the Beatles come to mind, but Dylan is still in a class by himself -lyrically. We could study his songs until the end of time and not scratch the surface. He is our modern-day Shakespeare and his new release is a lyrical gift to his many fans justifying his reputation of the highest literary acclaim.

Rough and Rowdy Ways may not convert those who don’t appreciate Dylan, but this album stands with the best of them. It is hauntingly seductive, intelligent, and outrageous. His stellar stable of touring musicians, including Texas guitarist Charlie Sexton, and special contributors Fiona Apple (singer-songwriter) and Benmont Tench, (Tom Petty’s Heartbreakers) provide a driving musical force that is needed to tie Dylan’s vision together.

“Murder Most Foul” is his first single to reach the top of Billboard’s rock charts in 58 years, surprising even Dylan. As he released this single on March 27, he thanked his fans and said “This is an unreleased song we recorded a while back that you might find interesting.” Perfect timing to release it in 2020, amidst America in turmoil. Nearly 17 minutes long, it was put on its own cd, making this a 2-cd set that could’ve fit on one. Maybe Dylan was making a statement that this should stand alone. It is listed as the tenth and final song on the album and it is one of his masterpieces. A complicated song about the assassination of President Kennedy intertwined with a seemingly endless list of references to modern day American culture: “the Beatles are coming, gonna hold your hand,” “play it for Lindsey and Stevie Nicks,” “play Don Henley, play Glenn Frey, take it to the limit and let it go by,” “what’s new pussycat? What’d I say? / I said the soul of a nation been torn away/ it’s beginning to go into a slow decay.” Dylan’s call for a better America?

The second single released, “I Contain Multitudes” is set to quiet, sparse musical arrangements of pianos, drums and violins, which give focus to his vocals and explains how he’s a complex kid. He’s a “man of contradictions and a man of many moods.” The title is taken from Walt Whitman’s poem and he runs with it speak/singing that “he’s just like Anne Frank, like Indiana Jones and them British bad boys, The Rolling Stones.” It is similar to “Murder Most Foul” in the many cultural references tossed around.

“False Prophet,” which is his third single, takes the repetitive chords from an old 1954 blues song “If Lovin’ is Believing” by Billy ‘The Kid’ Emerson and revs it up Black Keys style. It swings and swaggers, quite hypnotically and he convincingly sings, “I can’t remember when I was born and forgot when I died.” Again, his delivery pulls it off. “My Own Version of You” shows off his incredible imagination. He wanted to create a Frankenstein out of “limbs and livers and brains and hearts.” So, he searched the mosques and monasteries for the “necessary body parts.” He names Leon Russell, Liberace, Freud and Marx and then asks, “if there is light at the end of the tunnel, can you tell me please?” Clocking in at over nine minutes, “Key West (Philosopher’s Pirate)” is another beauty, featuring the accordion and references to Ginsburg, Corso and Kerouac, beat generation writers. The lyrics sound like a travel ad for Key West: “Key West is the place to be if you’re looking for immortality” and “If you lost your mind, you will find it there.” “Mother of Muses” is a simply beautiful hymn in a Leonard Cohen/Nick Cave sort of way, showing Dylan’s tender side. He sings about falling in love with Greek mythology’s Calliope, the Muse who presides over song and epic poetry. He name-drops Presley and Martin Luther King and laments, “I’ve already outlived my life by far.” If anything, Dylan seems more alive than ever. “Goodbye Jimmy Reed” and “Crossing the Rubicon” are traditional blues inspired rompers with more exceptional Dylan lyrics. “Black Rider” and “I’ve Made Up My Mind To Give Myself To You” are the weakest links but still interesting.

It’s a gentle, thought provoking and beautiful piece of work from a living legend that continues to explore and reinvent rather than stagnate. He’s on a never-ending tour of life. And we want more of him. What are Dylan’s songs really about? The answer, my friend, is blowin’ in the wind… and the past, present and future.