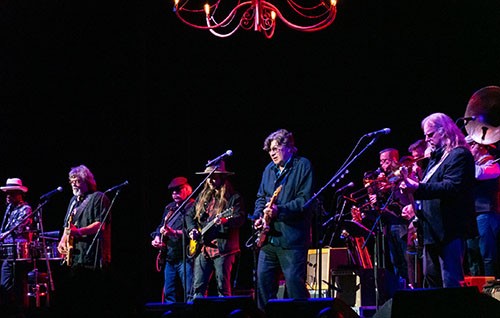 SFL Music: As one of the few people onstage who actually played at The Last Waltz in 1976, what was it like to perform in the Last Waltz 40 concerts in 2016 and again this year?

Bob Margolin: Similar stage decorations aside, the original expe- rience of the Last Waltz concert can’t be reproduced. The 2019 tour was an appreciation and original interpretation of the music, not a Tribute Band. The 2019 artists are notable in their own right
— Jamey Johnson, Warren Haynes, Lucas Nelson, Don Was, John Medeski, the Levee Horns, Dave Malone, Terence Higgins. In Nashville, add guests Margo Price, Darius Rucker, Vince Gill, Nathaniel Rateliff, Michael McDonald, and original Waltzers Em- mylou Harris and Robbie Robertson. I am blessed to participate in both very different experiences, considering they’re inspired by the same historic event.

SFL Music: In Nashville right before Thanksgiving, you played the music of the Last Waltz with an incredible array of talent, from a variety of musical genres. As I watched you playing not only with Warren Haynes and Michael Mc- Donald, but also with the likes of Lukas Nelson, Emmylou Harris, and Jamey Johnson— it struck me again how much The Band personified what we now call Americana, decades before we used the word.

Margolin: Sure did! The Band, with their individual geniuses and
magical collaborative chemistry created Ultimate Americana be- fore the term was hatched.

SFL Music: Why do you think The Last Waltz Concert, and the music played there, is so enduring?

Margolin: It’s powerful, evocative and creates a world of its own and many of us enjoy that soulful Time Travel. Real characters in a world before modern culture, transcending both 1976 and 2019.

SFL Music: Over the years, you and I have observed that ev- ery day is an opportunity to learn. What did you learn from this experience?

Margolin: I appreciated The Band’s music before I was in Muddy Waters’ band. I was invited to the 2019 Last Waltz to represent and deliver Muddy’s spirit. But I certainly took the opportunity to watch all the rehearsals and see how master musical directors Don Was and Warren Haynes developed the music almost every day. What an education for me.

SFL Music: In 1976, with a lot of star power and Martin Scorcese filming everything for posterity, you knew that this was an historic event that would be seen by vast audiences worldwide. What is the legacy of The Last Waltz?

Margolin: The original Last Waltz is the next cultural landmark to follow the Woodstock concert and film. The 2019 Last Waltz was powerful on its own but it’s hard for me to judge from my interior pers ective. Has the Last Waltz Legacy been extended? We’ll
see!