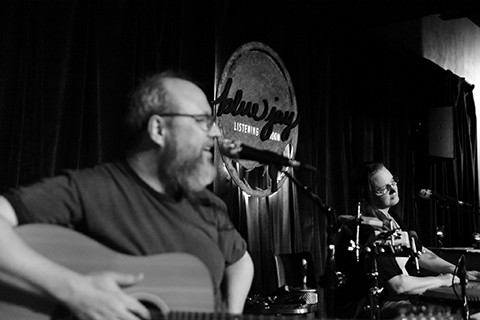 Vaylor and Melody Trucks, each with their own projects, are coming together to play their family’s music, the music of The Allman Brothers Band. Approaching this music with the intentions of the true spirit in which it was created. Joining them are Eric Sanders (Col. Bruce Hampton’s Fiji Mariners), Garrett Dawson (Butch Trucks and the Freight Train Band), Matt Stallard (Chris Duarte Group), Pete Orenstein (Frankly Scarlet), and Willis Gore (Bonnie Blue).
“I am so honored to be playing this music with my brother.  Vaylor has been just as much a musical influence for me as my father has.  To be able to be part of this project with him, as well as the other incredible members of this group, is a dream come true for me,” says Melody Trucks.

Adds Vaylor: “A good portion of the credit for the founding of Brother and Sister has to go to Eric Sanders. We had just finished playing in a Colorado-based tribute project called The Family Peach, and it went so well that Eric rightfully said that we should look into putting together something for the southeast. Now I never saw myself doing anything like a tribute band. Not because I am opposed to them, but just because I tend to, when left to my own devices, gravitate towards more esoteric music.

“But I saw what an amazing job Dweezil Zappa did in bringing together a group of musicians that were capable of performing the music of his father, and I have tried to use that as a template for what I want to do with Brother and Sister, The Music of the Allman Brothers. First of all, if you’re going in looking for a specific look or stage show, then you’ve already missed the point a bit. Look at the cover of At Fillmore East. It’s a group of working musicians and their crew standing in front of a pile of road cases. That was their look.

“And as for the execution of the songs – there’s a razors edge you have to walk. On one hand, the com-positional elements, which are many, must be executed as written. However, if you go up and play Dickey or Duane’s solos note-for-note then you’ve missed the point. The composed notes are essential, but so is the spirit of improvisation. The jams are just as important. And that’s what we’re trying to do with Brother and Sister – put together a group of musicians disciplined and schooled enough to execute the compositions, but also creative and quick-minded enough to jam without much of a structure.” For more on Melody and Vaylor Trucks, and/or the Brother and Sister band, pleasevisit https://www.brotherandsister.band/.