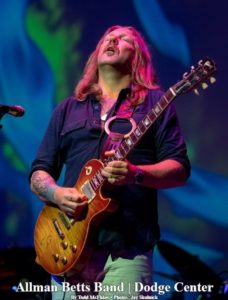 The Allman Betts Band was nothing short of spectacular at Charles F. Dodge City Center in Pembroke Pines on Sunday October 27. Devon Allman is the son of the late great Gregg, and Duane Betts’ father is Dickey, two found­ing members of the Allman Brothers Band.

The sons of giants have known each other for decades, but this is the first joint project. Duane and Devon released their first al­bum Down to the River in June and they’ve already built a wonderful fan base been on the road. Mixing up their long set with new music, picks from their solo work and classic Allman Brothers tunes, the Allman Betts Band was remarkable.

Following the impressive opening acts, JD Simo doing a Fab cover of Joe Cocker’s “With a Little Help from My Friends” and Joanne Shaw Taylor’s extraordinary guitar, the older and quieter crowd was psyched for the Allman Betts Band. Dodge City Center is a large and comfortable venue. It felt more like a high school gym than an intimate setting, such as Devon performing on the furniture at The Funky Biscuit in Boca Raton. The Allman Betts Band symbol on the enormous screen behind the talent was re­placed by tie-dyed imagery and a slightly trippy light show of pulsating red, orange, purple, and yellow. “1984,” the instrumental introduction on the familiar Van Halen record, played over the speakers before the Allman Betts Band jumped onto the stage with one of their new songs, “All Night.” The seven musicians were made up of four guitar­ists, two drummers and a keyboard player. 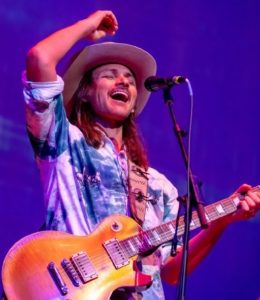 Devon wore a black button-down that was halfway open and white jeans. He sported dirty blonde hair that fell just past his shoulders, along with a little mustache. Duane looked like a modern cowboy in a white cowboy hat and button-down with animated horses. Also sporting long hair and a mustache, the brunette led the crew through “Shinin” Spectators were immediately reminded of the swirling guitar riffs of “Whipping Post.” Devon expressed appreciation and delivered an impressive cover of Royal Southern Brotherhood’s soulful “Left My Heart in Mem­phis.” Audience members cheered as the guitarists took turns with mighty solos. The first highlight of the evening was when Duane stepped up to sing the Allman Brothers Band’s gorgeous “Blue Sky,” the timeless track inspired by Dickey Betts’ lover Sandy Bluesky. Playing a beautiful white acoustic, Devon smiled as he joined Duane on cho­rus. By the end of the song, all four guitarists stood next to each other to jam in unison.

Pembroke Pines heard a few more Allman Betts num­bers, like when bass player Berry Oakley, Jr., the son of original Allman bassist Berry Oakley, delivered the psy­chedelic jam, “Autumn Breeze.” Concertgoers saw histori­cal images, including the Beatles, JFK, Live Aid, and MTV onscreen during the band’s “Good Ol’ Days.” Thousands were on their feet for another high point of the evening, the Allman Brothers’ “Ain’t Wastin’ Time.” Besides their predecessors’ familiar tunes, the boys delivered other enduring covers, including John Lee Hooker’s “Dimples,” as well as Prince’s “Purple Rain” with a Southern gospel feel. Just like the son of a king, Devon delivered astonish­ing fingerwork. “For you South Florida,” he expressed to a standing ovation. He then introduced the full band. “Play­ing that beautiful slide guitar for you tonight, from Los An­geles, California, Mr. Johnny Stachela. You might remem­ber this cat from the Sheryl Crow band, (percussionist) Mr. R. Scott Bryan. Back here keeping time for you from St. Louis, Missouri, my good friend and yours, Mr. John Lum on the drums.

On the keyboards, you’ve seen him with Robert Randolph, Dixie Chicks, Wu-Tang Clan, and about a thousand oth­ers, from New Jersey, the ninja assassin, killing it for you on the keyboards, Mr. John Ginty. Over here on the bass guitar, my good friend for 30 years now, Mr. Berry Oak­ley Jr. On lead guitar and lead vocals tonight, my good friend and yours, Mr. Duane Betts is in the house in South Florida.” 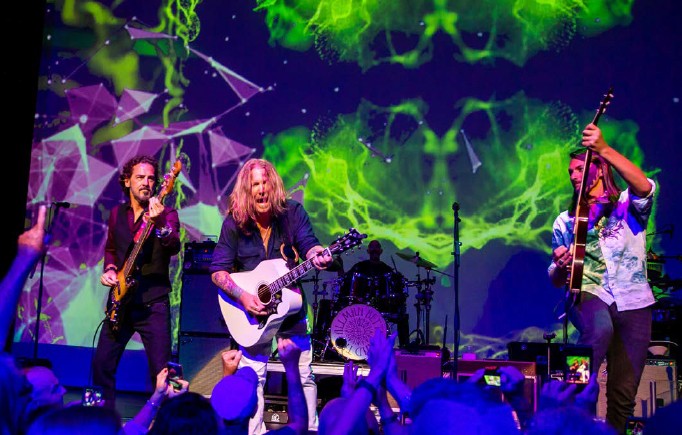 Mr. Allman then instructed the room not to be shy and sing along to the swampy, mellow grooves of “Down to the River.” He pointed to the concertgoers that got out of their seats to sing and dance in front of the stage. “I think ya’ll have the right idea right here. So why don’t we move the entire party all the way up as far as we can get? Let’s get the whole band up and we’ll play you one more?” The room erupted in cheers as folks packed the floor in front of the stage. “Or two more,” he asked. “Let’s start with one and see how it goes.”

With his hair pulled up into a ponytail, Devon grabbed a gorgeous black instrument. “This is my dad’s acoustic gui­tar right here,” he said. “I thought it would mean so much more to bring it out and play it for everybody than for it to be behind glass in some museum. Screw that. It took me a while to open this thing, man. It took me a few months. I just looked at it. I finally flipped it open and it smelled like an AC/DC concert. It smelled so much like marijuana that I named it Cheech. So Cheech is going to play for you a little bit tonight.”