Get Back With The Beatles 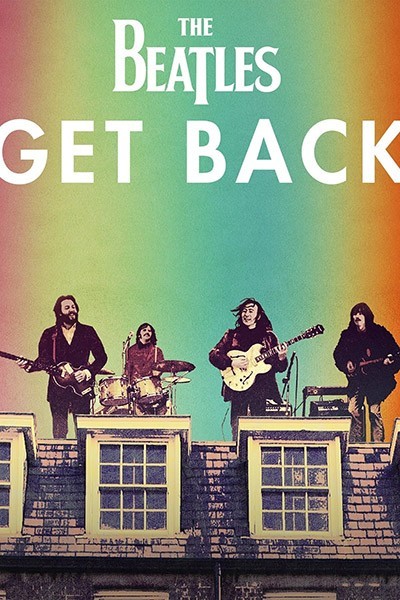 Get Back With The Beatles

Did you ever want to be a fly on the wall and watch the Beatles create and rehearse the songs for their final album, Let It Be? Now is your chance, thanks to famed Lord of the Rings Director Peter Jackson and Disney Plus. With a new 3-part docuseries named The Beatles: Get Back, Jackson takes us on a magical mystery tour of the inner workings of the Beatles, in January, 1969, as they create and rehearse the songs that will become their last album release Let It Be. What a fascinating treat it is to see things unfold as they have only 22 days to complete the album and they start with very little material. For a true Beatles fan it is absolutely essential viewing, but even for a casual fan, it is a delight to see John Lennon, Paul McCartney, George Harrison and Ringo Starr magically create these timeless and beautiful songs and then joyfully and enthusiastically perform them. For those that were previously oversaturated with them, and that would include me, it’s now come time to Get Back! Seeing this docuseries gives a whole new perspective and a brand-new respect for these musical geniuses, who are all incredibly charming and funny. For those with no attention span, it is long and Episode 1-Part 1: Days 1-7 moves at a snail’s pace so skip to Episode 3-Part 3: Days 17-22. If you are a music lover, though, stick with it and you will be rewarded with tremendous insight and a ton of priceless moments like Episode 2-Part 2: Days 8-16 which contains so much to love. The quality of video and sound are surprisingly superb and it is remarkable how it seems as if it was filmed in 2021 instead of 1969. Captions have been added which pop up to explain who everybody is, give useful information and show the time progression on the calendar.

Their goal was a live album, a documentary of the making of this album and some sort of a live performance, after scrapping the initial idea of a televised event. It turned out to be the last live performance of the Beatles before their breakup in 1970, which makes this docuseries worth seeing just for this amazing live performance alone. Director, writer and producer, Peter Jackson, takes on the task of going through over 60 hours of film footage and 150 hours of audio recordings that were originally recorded by Director Michael Lindsay-Hogg for his 1970 film, Let It Be. Jackson captures the genuine talent and genius of what many consider the greatest music group of our time. Their charm, chemistry and talent is undeniable. This over 8 hour, 3 part docuseries needs to be watched several times because there is so much going on and you don’t want to miss a thing.

The first episode begins with a short and speedy Beatles history from 1956 to 1969. Then it shifts right into The Beatles arriving at Twickenham studios with a mere few weeks to complete 14 songs and rehearse for a live show, before filming for the movie Magic Christian (starring Peter Sellers and Ringo Starr) is set to begin there. It is filmed over the month of January 1969 from January 2nd until January 31. Granted, The Beatles knew this was being filmed and might have been on their best behavior but their beautiful smiles are genuine. It is still a celebration of their friendship, combined with their enormous musical creativity and it shows, step by step, how magically, with their backs to the wall, they created these famous songs together. While working on George Harrison’s song “Something,” which made it onto their Abbey Road album, (actually recorded after Let It Be but released before) it shows them getting stuck on the lyrics, “Something in the way she moves, attracts me like” … John gives the advice, “Just say for now whatever comes into your head each time,” he said, “Attacks me like a cauliflower, until you get the word, you know?” Then they laugh and offer, attracts me like a pomegranate.” Their work in progress is the most fascinating part of all.

And just how cool is Ringo? Enough credit has not been given to him for being such a nice buffer and hanging in there when things got rough, but his devotion becomes clear, as does his perfect drumming and perfect hair. Hard to tell who is cooler since they all are, in their own distinct way. It also shows what a great voice Paul had in 1969. Seeing the brilliance of Lennon and McCartney as songwriters is exciting to watch. Harrison has come into his own and is bursting with songs that he can’t contain. George mentions to John that he was thinking about releasing an album of his own outside the Beatles and if they did their separate things as well, it would preserve The Beatles. He said, “I’d like to maybe do an album of songs…It would be nice to get them all out … just to hear what all mine are like together…You Know,’ cause all these songs of mine I could give to people who could do ‘em good. But I suddenly realized, ‘You know, f***all that. ‘I’m just gonna do me for a bit.”

The Beatles discuss that since their manager Brian Epstein passed away, they have all been negative about the group and joke of divorcing each other. It’s getting near, they say, “and who’d have the children?” The break-up is in the air, but for the time being, they have a job to do, and they do it well. Ringo does his best to stay positive and is the first one to show up in the studio, eager to please. George is feeling neglected and unappreciated and quietly gets up at lunchtime one day and says, “I think I’ll be leaving the band now,” and walks out saying, “Get a replacement… see you ‘round the clubs.” They go to his house, have a disastrous meeting but eventually succeed in a 2nd meeting which resulted in Harrison rejoining, after they made concessions (one of them being moving from TwIckenham studios to their own Apple studios, and the other canceling the idea of a tv special). There is a great audio portion, complete with subtitles, of a secret meeting where a microphone, hidden by Lindsay-Hoggs in a flower pot, captured John and Paul discussing how they haven’t treated George with the respect he deserved. Billy Preston is brought in for piano/keyboards and is a great musical inspiration for them, as well as an uplifting stabilizer. They had met him years earlier in Hamburg. Germany when he was backing Little Richard.

In the studio, Yoko Ono is pretty much glued to John Lennon and they are clearly in love, as is McCartney and Linda Eastman (the future Mrs. McCartney). We see Linda’s six-year-old adorable daughter, Heather, adding cuteness and lightness, and is hilarious when she watches Yoko Ono’s screaming banshee vocals and decides to do her own version. When addressing the rumblings that Yoko was breaking up the Beatles, Paul jokes, “It’s gonna be such an incredible, comical thing, like in 50 years’ time, they’re going to say The Beatles broke up cause Yoko sat on an amp… see, John kept bringing this girl along.” McCartney thanks Ringo’s wife Mo (Maureen) for being such a great fan. McCartney and Lennon comically make fun of the stories about themselves in The Beatles fanzines, as the band laughs about it. You almost forget that they are just kids, but really famous ones. In January 1969, they are only between 25 and 28. All throughout their rehearsals of their own songs, they clearly enjoy jamming on old 50’s classics like Carl Perkins’ “Blue Suede Shoes” and Chuck Berry’s “Johnny B. Goode.” The studio scenes show just how much they are fans themselves, and how much fun they have playing rock and roll. Their suave music producer George Martin is seen throughout, as is Glyn Johns, their recording engineer/co-producer with the ultra-cool 60’s haircut. Mal Evans is their faithful road manager/assistant and quite likeable. Surrounded by all the skinny guys, he says at one point that he’s not eating today because he needs to take off some weight. You can also catch a young Alan Parsons in the control room working as a tape operator. 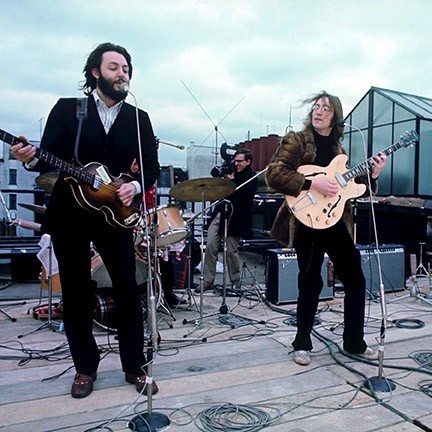 This docuseries shows their camaraderie and seeing their joy at creating music together is wonderfully refreshing. Lots of great music at the end of the third part of the series with their final mesmerizing performance as The Beatles, filmed on the rooftop of their new Apple studios (In London), with people gathering in the streets and other rooftops, all while the English policemen are about to arrest them for disturbing the peace. The police got 30 voice complaints in 30 minutes but with all their grumblings they keep hovering but don’t stop them from playing. Fans are interviewed on the street and split screens with the Beatles’ performance on the roof and the police threatening arrest simultaneously makes for an interesting juxtaposition. One woman angrily complains, “It woke me up from my sleep and I don’t like it.” A young woman quizzically asks, “Why’s it on the roof, with all the money they’ve got?” Most of the crowd approves and are big fans. An older gentleman is asked if he’d mind if his daughters went out with them and he quickly replies, “I wouldn’t mind cause they’ve got money.”

The rooftop concert consisted of nine complete takes of five Beatles songs: three takes of “Get back”; two each of “Don’t Let Me Down” and “I’ve Got A Feeling”; and one take each of “One After 909” and “Dig A Pony”. This rooftop performance alone makes you love them all over again. The closing credits show some funny as hell clips of them goofing around, as well as snippets of “Two of Us,” “The Long and Winding Road,” and “Let It Be,” which were recorded in the studio, the day after the rooftop concert and made it onto the Let It Be album.

My advice: Do yourself a big favor and Get Back to The Beatles!