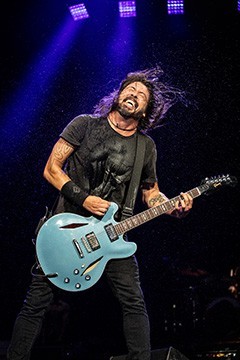 Foo Fighters’ founder and lead singer, Dave Grohl is one busy guy. He released his 10th Foo Fighters album, Medicine at Midnight, in February of 2021. His excellent book, named The Storyteller: Tales of Life and Music, was released October 4th, 2021, detailing his early beginnings, never wavering passion for music, and strong drive that pushed him to be the rock icon that he is today. He did a limited run of “intimate evenings” which brought his book to life. It is his collection of memories of a life well lived, from his early life growing up with his very supportive mother in Springfield, Virginia, touring with the D.C. hardcore punk band Scream as a teenager, reaching the top with Nirvana in Seattle in the early 90’s, to crawling from the wreckage of Kurt Cobain’s suicide and forming and fronting his own band, Foo Fighters. Currently, he is happily touring with the Foo Fighters, who celebrated 25 years in 2020, and will be touring on the west coast of the U.S., Mexico and South America in the next few months, then Rockville Music Festival in Daytona, Florida in May 2022, Boston Calling Music Festival also in May, and Europe over the summer. On October 30, 2021 they were inducted into the Rock and Roll Hall of Fame. In February 2021, for a hoot and a Record Day Exclusive, they recorded an album of Bee Gees covers, named Dee Gees- Hail Satin, which includes five Bee Gees covers on side one and live in-studio recordings of their Medicine at Midnight album on side two. It can be listened to on YouTube as it is quite collectible and selling for $275 on eBay. As if that wasn’t enough, their new horror/comedy movie Studio 666, on Open Road Films, will be out in the U.S. on February 25, 2022. Does this man ever rest? He’s also raising three young daughters, Harper, Violet and Ophelia with his wife Jordyn. 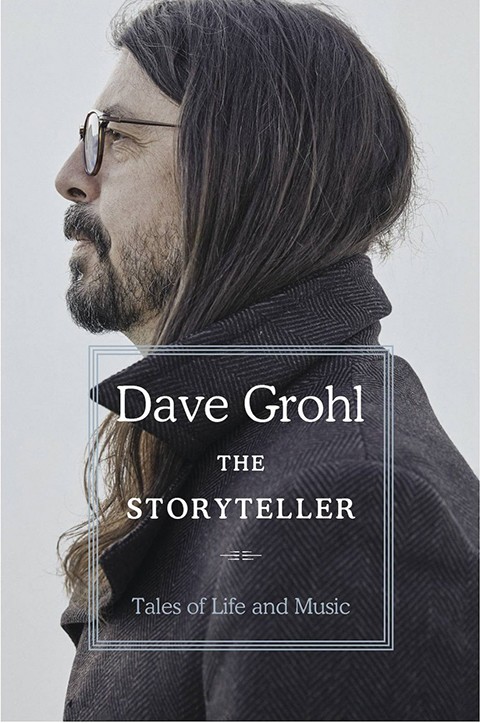 It’s time to take a moment to commend him on his accomplishments and long-term success. Not only was he the drummer in one of the most influential rock bands of our time, Nirvana, but then he formed a highly successful dream rock band of his own, Foo Fighters. They have succeeded over 25 years with tons of Billboard charted hits such as “Everlong,” “Times Like These,” “Learn To Fly,” “My Hero,” and “Best Of You,” to name just a few. The band members seem to really like each other and show no sign of slowing down, quite the opposite. 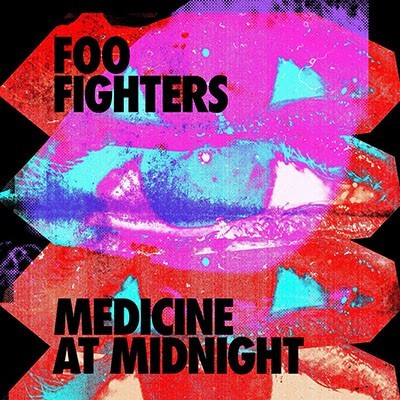 Medicine at Midnight is only 36 minutes long but contains nine songs packed with hooks and winning choruses. It was released on RCA and Roswell Records. His lifelong fascination with UFOs surfaced when he named his record label imprint Roswell Records after the 1947 UFO crash in Roswell, New Mexico. Dave knows how to write a hit song and each album adds more hits to his repertoire. If you have been to a Foo Fighters’ concert, you know how the hits add up to one explosive ear fest. If you have not seen them live, then you are missing a truly great high energy event. Each member of the band is a superstar in his own right. The opening track is the extraordinary “Making A Fire,” and is one of the standout tracks with super addictive guitar riffs, winning backup vocals and a cool bridge. There is a soulful re-version of it, produced by the famous DJ Mark Ronson and features Dave’s daughter Violet on backup vocals. Both versions are great because the song is just so good. The infectious “Love Dies Young,” one of Dave’s favorite songs on the album, is another gem. The melodic “Waiting on a War,” starts slowly with its haunting chord changes and explodes into full rock mode, delivering his anti-war message of love: “never really wanted to be number one, just wanted to love everyone.” This song was inspired by him growing up fearful of wars and his young daughter, Harper, coming to him also worried about a possible war. On “Holding Poison,” there is a super guitar intro which leads into a chunky hypnotic Billy Squire (“Everybody Wants You”) beat and then escalates into a high-octane rocker. “No Son of Mine” pays tribute to Motorhead with aggressive chunky riffs and a poke at the hypocrisy of self-righteous leaders. “Chasing Birds,” is a complete mellow slow down with beautiful vocals reminiscent of John Lennon. “Cloudspotter” started with a riff Dave had in his head for three years and was inspired by LL Cool J’s “Going Back To Cali” – and rooted in clunky, old school disco, although it still sounds like a hard rock song. One of the singles, “Shame, Shame,” is vaguely reminiscent of Bowie’s “Fame,” and has a haunting video that is inspired by an unsettling recurrent dream that Dave had as a teenager. The video is spell binding and the song did reach Number 1 on the Billboard charts. Conceived as a party album, Dave wanted to boogie like David Bowie’s “Let’s Dance.” The percussionist who played on Bowie’s “Let’s Dance,” Omar Hakim, plays all over this album. It is not an earthshaking album but very likeable, especially for fans of Foo Fighters. It’s a diversely influenced, compelling and fun album that is well worth a listen. 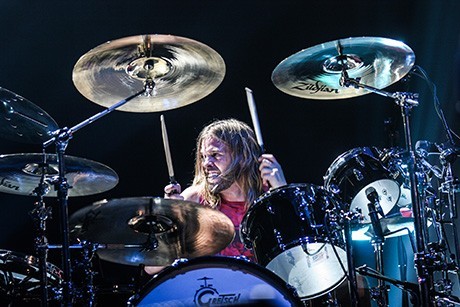 His memoir is well written and endearing. It’s an emotional and interesting read and like all of his work, done by “his own hand.” We learn that he once flew halfway around the world for 40 hours, while touring in Australia, just to go home for one evening for his daughters’ dance at their school, and flew straight from the dance back to Australia to finish his tour. In his book, Dave explains how he named his band Foo Fighters, while reading the book Above Top Secret: “In a chapter about unidentified craft over Europe and the Pacific during World War II, I found a term that the military used as a nickname for these unexplained glowing balls of light and thought it was just mysterious enough for me.” He is talented, funny and happy to be alive. He tells how he fell off the stage and broke his leg and had a doctor hold his leg together so he could finish the show. When he gets knocked down, he gets up again. As he says, “Surrender was never in my DNA.” It is a most uplifting book, as well as entertaining and informative about his childhood, his children and his rock adventures. From his step-by-step accounting of joining the punk band Scream at 18 years old, his time with Kurt Cobain/Nirvana as they climbed their way to stardom, the heartbreak of Kurt’s suicide, the forming of Foo Fighters, jamming with Iggy Pop, drumming for Tom Petty, dancing with AC/DC, meeting Paul McCartney to having Joan Jett read bedtime stories to his children. His account of his feelings when Kurt died are mournful and raw; “Kurt was more than just a name to me; he was a friend, he was a father, he was a son, he was an artist, he was a human being, and over time he became our universe, the point that our entire world orbited, but he was just a young man who had so much to look forward to. WE had so much to look forward to… Life soon became a long series of firsts. My first cup of coffee since he disappeared. My first meal since he disappeared. My first phone call… a succession of moments in which I had to relearn everything. I HAD TO LEARN TO LIVE AGAIN.” 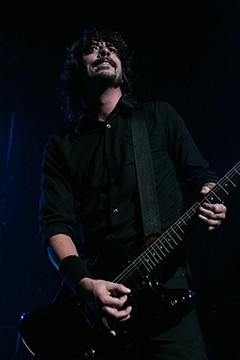 They have announced a new movie, a horror/comedy, Studio 666, which is hitting the U.S. on Feb 22, 2022. It was shot in secret and is about what happens when the legendary rock band rents an Encino (Los Angeles) mansion steeped in grisly Rock n’ Roll history, to record their 10th album. The trouble is that Dave is creatively blocked, and when evil forces in the house sink into his consciousness, the creative juices begin to flowing but so does the blood. Think Hard Day’s Night meets Night of The Living Dead. It stars Dave and the rest of his bandmates, Taylor Hawkins, Pat Smear, Rami Jaffee, Chris (Shifty) Shiflett and Nate Mendel and is bound to be lots of fun. That is one thing that Dave seems to have in abundance…lots of fun. He explains, “After decades of ridiculous music videos and numerous music documentaries under our collective belts, it was finally time to take it to the next level… A full-length feature horror comedy film.” As Dave sums it up, “Be ready to laugh, scream, and headbang in your popcorn. Studio 666 will f*** you up.”

So… it is all very impressive. Dave’s a great storyteller and one of the most humble and positive people out there, which is needed in times like these. As he sings, “In times like these, you learn to live again.” Check out both new albums, read his new book, get ready for their new movie, catch them on the Rock and Roll Hall of Fame 2021 Induction on HBO Max, starting November 20, 2021, and make sure not to miss them when they come to town. Like UFOs, these Foo Fighters are glowing balls of light in a dark sky.