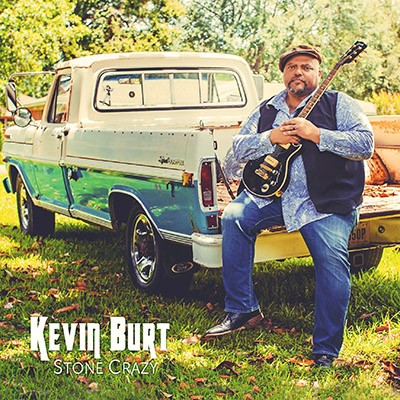 Kevin Burt has been a force for years and is finally getting the International recognition he so deeply deserves. His voice is commanding and soulful and his songs are honest and from the heart.” — Mike Zito

Kevin Burt releases his brand new album Stone Crazy on October 16, 2020, via Gulf Coast Records. The album was produced by musician/producer Mike Zito and was recorded at Marz Studios in Nederland, TX.

Stone Crazy, Burt’s first album on the Gulf Coast Records label, is comprised  of ten songs, all written by Burt, with the exception of the Bill Withers tune, “Better Off Dead.” Burt describes songwriting as, “a journey,” a journey in which he tells stories of observations he’s made along the way. The songs on Stone Crazy are his observations and experiences in life that have shaped how he views love and relationships. Kevin’s wife, Nicole, his muse and biggest influencer, is the inspiration for many of the songs on Stone Crazy.

For more than 25 years, Kevin Burt has been electrifying audiences throughout the Midwest, while simultaneously dispelling the myth that true blues has no roots in Iowa. His soul-inspired presentation is unique — consistently getting him compared to a range of artists such as Bill Withers and Aaron Neville — with the ability to build an audience rapport that has been compared to B.B. King. Burt is a self-taught musician (vocals, harmonica, and guitar) whose smooth, warm vocal presentation sets a mood of relaxed exhilaration, with a welcome mixture of serious music and infectious humor that audiences of all ages seem to enjoy. His voice and presence are powerful. His unique delivery ranges from the sweetest, fullest, juiciest come-on to the most playful growl.

Kevin Burt has won many awards and played many festivals, both solo and with his band. In 2018, Kevin “B.F.” Burt crushed it at the Blues Foundations 34th International Blues Challenge (IBC), taking home top honors in three categories. Kevin won first place in Solo/Duo, (the Cigar Box Guitar Award recognized him as the best guitar player in the Solo/Duo category), and the Lee Oskar Award for Best Harmonica Player. Burt was among over two-hundred bands and solo/duo acts from around the world entered into the five-day event on Beale Street. In 2019, Burt was nominated for a Blues Music Award for his debut album, Heartland And Soul (Best Emerging Artist Album) and was also inducted in the Iowa Blues Hall of Fame.