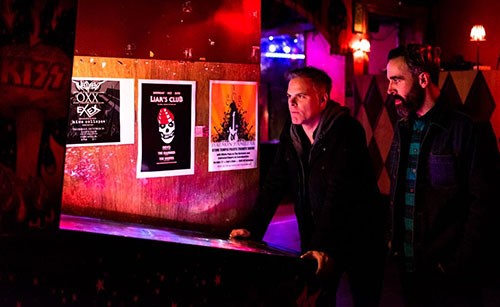 Music is a mover, a shaker, a relaxation tool and an inspiration. Local H have basically encompassed these ideals since their original formation in 1990. With eight studio albums under their belt, they’ve spawned such hit singles as “Eddie Vedder” and “Bound For The Floor” (As Good As Dead released in 1996), “Hands On The Bible” (Here Comes The Zoo released 2002), and “California Songs” (What Ever happened to P.J. Soles? released in 2004). Now, this extraordinarily talented alternative rock duo, Vocalist/Guitarist Scott Lucas and Drummer Ryan Harding, have just released their latest LP LIFERS, which coincided with their 30th Anniversary.

Catching up with Lucas during this COVID-19 lockdown, he revealed some details about their new music, his influences and what fans can look forward to.

Ohio Music Experience: Tell me about the new album LIFERS, songs like “Hold That Thought” and I just heard “Sunday Best.” How did those songs come about? What was the inspiration?

Scott Lucas: I don’t know, I mean, a song like “Hold That Thought” was just kind of really into sort of old, garagy pop songs and like there’s a lot of stuff going on in Chicago that there’s these great, sort of garagy, pop bands, and it was just kind of wanting to do something in that vein and have it still sound like us. Every song has a different, I don’t know, origin, I guess.

Ohio Music Experience: Was the “Sunday Best” video based off of the movie Casablanca?

Lucas: Well, yeah. I mean, the thing about “Sunday Best” is that whole line in Casablanca where he says “the trouble with two people in this crazy world doesn’t amount to a hill of beans,” or something like that, and I think the idea of that song is that, the hill of beans is everything, you know? Like everything’s just so huge and crazy, and when you think of who we are in the span of time, you could go crazy thinking about stuff like that. So, like the only kind of saving grace of our existence is these sort of connections that we make between people. Nothing means anything right? So, maybe like all those little things, the things that mean nothing are the only things that mean anything. You know, you can spin out thinking about all this crap, but you get down to simple things that really sort of make up a person’s life, and when it’s all over, none of us knows what’s in store for us, so this could very well be all it is. So, if that’s all it is, what do you care that you’re only a certain amount of years in billions of years of existence of the universe. Who cares?

Ohio Music Experience: That’s a good point. Does the album have a theme or are different life experiences playing into it?

Lucas: Yeah. I mean, it was coming out the month that we’d been a band for thirty years. So, it was just this idea that we wanted to work with a bunch of people who have made music their life as well. So, we worked with our friend Andy Gerber who has recorded a lot of records with us. We worked with Steve Albini. We worked with J. Robbins from Jawbox, Juliana Hatfield, John McCauley from Deer Tick, John Haggerty from Pegboy. I mean, just a lot of people that we look up to and became friends with over the years. It was this thing where we wanted to have all these people that we feel like got into music for all the right reasons. We looked up to and wanted to get into music for the right reasons as well.

Ohio Music Experience: So, that’s how you all came together? Just that comradery?

Lucas: Yeah, just meeting people over the years, going out on the road and cheering up people and you know, drinking with them. It’s just that kind of thing where we wanted to sort of get this idea of this life lived through music with these people that we met along the way.

Ohio Music Experience: How was the recording experience with Steve Albini who’s recorded with a lot of rock bands (Nirvana, Pixies, Bush)?

Lucas: Well, John from Pegboy was kind of ribbing me a couple of years ago. We’ve never recorded with him before. We’d done some stuff at the studio a few times, but never actually with him. So, it was kind of like it was time to make some recordings with him. I’ve never worked with him before because I was always kind of afraid of him, and John was, “there’s nothing to be afraid of. Just do it! I can’t believe you haven’t done anything with him.” So, that was kind of the catalyst for that, and we just booked a couple of days with him and recorded as much as we possibly could in those two days, and it was great! We got some good stuff out of it.

Ohio Music Experience: Yeah it sounds like it. What inspired you to go into music? 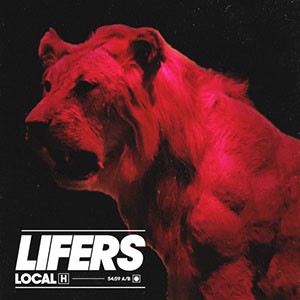 Lucas: Um, you know. The usual stuff like probably “Hound Dog” by Elvis Presley or “Crocodile Rock” by Elton John. Anything that had to do with animals when I was a kid, and pop music I was into. I don’t really remember a time when I thought about anything else so, that’s hard to say. I don’t ever remember wanting to be a fireman or anything like that. I don’t know if it was just there from the beginning or it was just that kind of thing when you hear, you know, shitty pop songs on the radio, your like, oh yeah. Somewhere in your mind you think you want to do that, but you’re not even aware that that’s happening.

Ohio Music Experience: So that was always on your radar. Did you teach yourself to play guitar and sing or did you take formal lessons?

Lucas: No. I taught myself out of those guitar magazines and learned how to play heavy metal songs out of them. (Ronnie James) Dio songs. That was basically, teaching yourself how to play Judas Priest stuff was pretty much how I learned to play.

Ohio Music Experience: That’s impressive. The story of how you guys came up with the band name, it was a combination of the R.E.M songs “Oddfellows Local 151” and “Swan Swan H”?

Lucas: Just a really big R.E.M fan, and when it came time to name the band, it was just a situation of trying to pick a name that somebody else didn’t have because we didn’t want to get sued. So, the idea was what Pink Floyd had done for their name. They took the first names of two blues artists that they liked, and so we kind of did the same thing, but we just applied that rationale to R.E.M. songs. That was how we did it.

Ohio Music Experience: Very cool. What would recommend to an up and coming artist? 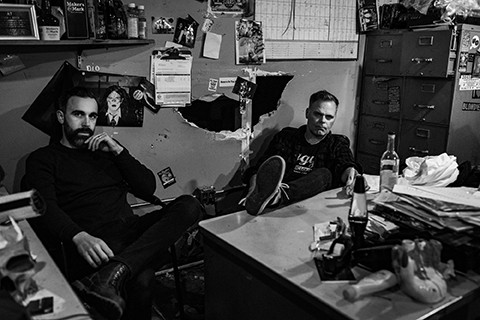 Lucas: I don’t know. I don’t think the advice you can give anybody is worth anything, you know? I think, you get to this thing where no matter what people tell you, you want to take your shot and do things your own way and that’s the way you should do it. That’s the way it should be. I mean, a lot of people are going to tell you that there’s a formula to do things and there isn’t. If a person is smart, they can figure out their own way. They can sort of see what other people do and go, yeah, I don’t want to do that, and I think that’s kind of what we did a lot was just sort of look at what other people did and said, yeah, let’s not do that. It’s a process of more of what you don’t want to do then what you do want to do.

Ohio Music Experience: Is that what you would say was the secret to your longevity and success?

Lucas: If you want to call it success, fine, but I mean, the longevity is definitely stubbornness you know, sort of bullheadedness is what I would put to it. It’s sort of like not leaving yourself an out, and the fact that I really enjoy what I do, and I think that can’t be discounted. Like even the biggest, even Paul McCartney who doesn’t have to lift a finger, wants to go out and play because he really enjoys it. I think that’s often underestimated in the equation. If you don’t enjoy it, what are you doing?

Ohio Music Experience: What is your favorite thing about being onstage?

Lucas: Trying to sort of lose yourself. Just that kind of thing where you’re trying to create this moment that you hope will be different than the last time, but at the same time you’re trying to chase after a certain thing that you had before. I don’t know, I suppose it’s like being hooked on heroin. You know, there’s that sort of thing where you’re chasing after something and you always want it. I mean. I don’t know if that’s what being hooked on heroin is like. Don’t ask me that either.

Lucas: But I mean, I would definitely say that I am hooked in a sense and it’s probably not much different from you know, a gambler or a drug addict. I chase that thing, and I realize with drug addicts, there’s that constantly thing where you’re chasing after a high that you’re never going to get to, but in music, you do get there. You do get to that, and that’s important, but the actual trying to get there is more important.

Ohio Music Experience: What are you doing in your downtime with this pandemic lockdown?

Lucas: Well, I’m about to cover Blondie songs. So, that’s what I’m doing right now. Most days I’ll try to figure out a song that I can learn and cover and post on our social pages and shit like that, and then sort of forget that I ever learned it, and then move on. Then tomorrow, learn another song, and today it’s Blondie. So, that’s kind of what I’ve been doing to sort of keep myself busy.

Lucas: Yeah, it’s a little project that keeps me occupied.

Ohio Music Experience: Is there anything else that you guys are working on for your fans to look forward to? Video’s or anything like that? 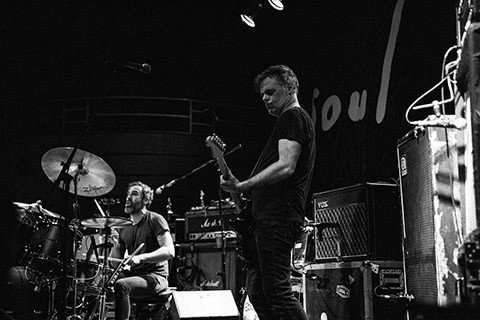 Lucas: Yeah, yeah. We just released a video today for “Sunday Best” We were shooting a video yesterday for another song that we should have done in a couple of weeks. We’ve been doing these shows from our practice space that we’ve been streaming. You know, stuff like that. We can’t go out and play so, we’re just playing and trying to keep ourselves occupied.

Well, fans certainly have some amazing new music to watch and hear that can keep them occupied. Hopefully, Local H will be able to resume their world renown almost non-stop touring soon.