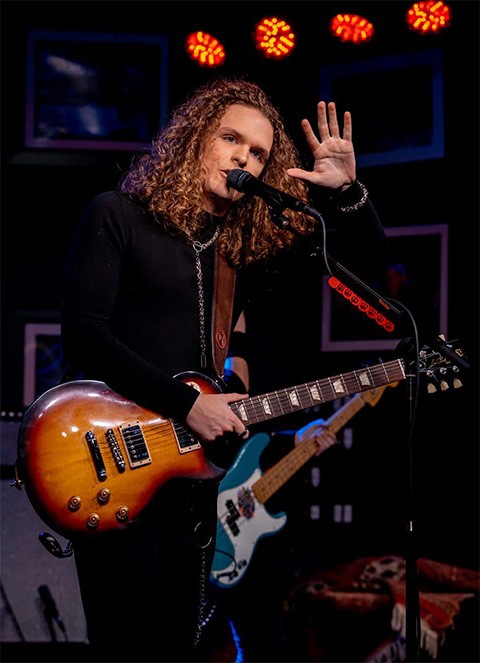 On May 20th, Mason Pace packed ‘em into The Funky Biscuit in Boca Raton. Devoted fans were thrilled to see the young vocalist and guitarist perform brand new material, along with some classic covers. Mason has a reputation for playing light and shade, meaning he can rock n’ roll, as well as sing ballads within the same song. His impressive resume includes opening for Joan Jett and Cheap Trick, and headlined alongside Vince Neil, Ace Frehley of KISS and Skid Row’s Sabastian Bach. SFL Music jumped at the opportunity to sit down and chat with the multitalented influencer.

SFL Music: Who is Mason Pace?
Mason Pace: I am 19-years-old. Born and raised in Boca. I went to high school at St. Andrews. Now I go to Florida Atlantic University. I just declared my major in Marketing. I am learning stuff that I can apply to other people, and I am actively helping my musical career. I wanted to pick up marketing because if I can’t push my music out to people then you got nothing.

SFL Music: Let’s talk about your show at the Biscuit. That’s where you got to premiere material from your new album.
Pace: Because the show was completely filled in terms of reserved seating, I wanted to make that the sneak peek for my new EP coming out on August 6, King of Hearts. I also got to reveal my new logo featuring altered peace. There’s an M and a P over a peace sign, but that’s for the viewer to pick up. This is my sophomore album. The first single “Reborn” will be released on all streaming platforms on June 4th. The second time around, there was a true path in terms of style and look. My first album, Whateverland, was great. I wrote the entire thing when I was 15.

SFL Music: Wow! That’s quite impressive. What can you tell me about your wild drummer and your laid back bass player?
Pace: Alex and Cam are amazing. It’s been a pleasure to share a stage with them. The drummer Alex Abbasi is my Animal. I am referencing Animal from “The Muppets.” Every time he plays a solo, he just hits hard. Cameron Martell on the bass is extremely versatile. He plays a lot of different genres. He loves standing out as a bass player, which you don’t get to see very often. Then there is Kayla Frey (adding another layer to the sound). She’s only done one other show with us, and she is a natural and talented singer.

SFL Music: Do you change your set-list every night?
Pace: It all depends on how long the set is because we have more than 4 hours’ worth of material. We do like to swap songs around, but stay true to our originals. We are really pushing our own new material now, especially from the new EP. For The Funky Biscuit show, we actually learned three new covers that people really took to. There was “The Reaper” by Blue Oyster Cult, “Bad Guy” by Billie Eilish, and “Supermassive Black Hole” by Muse. We love making our own versions of those songs, especially with the Billie Eilish song because she is a pop artist.

SFL Music: I know you play cool covers covers, like “War Pigs” and “Ice Cream Man” that we just experienced in Boca.
Pace: Oh yeah. At the Biscuit, we did our own rendition of “Yer Blues” and “Come Together” as our encore. We probably know more Beatles than any other artist in our set-list. Not only because we like the Beatles, but we’ve also been a part of the Beatles on the Beach Festival in Delray Beach (in April).

Daniel Hartwell, Beatles on the Beach Production Executive: Mason Pace took the stage by storm with a fresh young energy, dressed the part and blew away the audience with a renewed Sgt. Pepper-futuristic vibe. His set screamed Beatles forever and beyond.

SFL Music: Mason, besides the Fab Four, aren’t you also a huge Led (Zeppelin) Head?
Pace: For sure. My first concert was Robert Plant (& The Band of Joy in 2010 at Bayfront Park in Miami). I was 8-years-old. 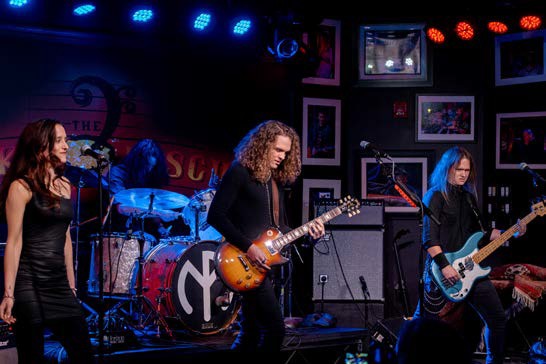 SFL Music: You’re sponsored by some pretty big names too.
Pace: As of the summer of 2019, I am a Gibson endorsed artist. I got to play their G-45 acoustic guitar for their summer showcase. That was a very nice guitar. I have been playing Gibsons ever since I was 11 or 12-year-old, and my first big boy electric was a Fireburst Gibson Les Paul Studio. So for them to ask me to be a part of their family was a huge honor. I am always happy to have a Gibson around my neck. My other endorsement is from Kodak Pixpro. They were just coming out with the Kodak 360 4K camera. So at the same showcase with Gibson in 2019, I used the 360 Kodak camera.

SFL Music: You certainly have an impressive resume for such a young musician. What’s next?
Pace: I’ve already done a lot of really cool stuff, like two years in a row at RockFest 80s. Our next goal is doing weekend tours all around Florida. On May 29th, we are driving up to a very nice venue, Haven Lounge in Orlando. For the future, I want to push my new EP. I also want to write more songs. Not only do I want to be in many more festival line-ups, I want to go on the road with a band that I really look up to. Let’s skip all the baby steps and go on a global tour. I’d go for it. (Laughs).

SFL Music: If you could jam onstage with anyone, who would you choose? Robert Plant?
Pace: That’s a great question. Right now, I would say Gojira. They are probably the biggest mainstream metal band out there now. They just came out with an album, Fortitude, which is a masterpiece. To do anything with Gojira and go on tour with them would be amazing.

SFL Music: To wrap things up, what else do you want to say to South Florida music lovers?
Pace: Covid was the time when I could make the jump from a local cover band to the original band that is looking to go everywhere around the world. South Florida music lovers are the reason that I am doing what I do right now. I am very grateful to those that are reading this and those who have been supporting me throughout my 8-year career in rock. (Laughs). They will not be forgotten.