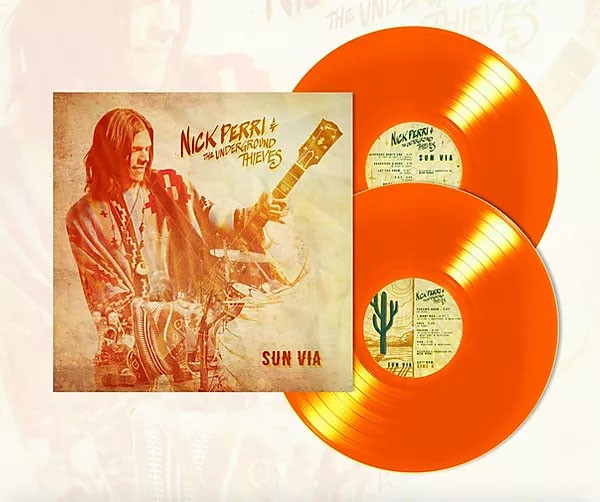 SUN VIA follows two-and-a-half years of momentum for Perri’s band, during which the group released various singles and music videos, delivered standout performances as support for The Struts and Slash ft. Myles Kennedy & The Con- spirators, and earned national and international acclaim. Classic Rock Magazine/LouderSound.com named Nick Perri & The Underground Thieves one of the “20 great bands to shake up the 2020s.”

“SUN VIA is a labor of love—I gave it everything I had to give,” said Perri. “It was a long process, and I believe the songs and sounds reflect that effort. I’m very proud of the album top-to-bottom, and I’m excited to finally share it.”

“I haven’t heard a song that has made me LITERALLY want to get up and get a guitar and start playing immediately since I was a little kid.” – Danny Wagner

“This song is infectious. You can’t not boogie when you hear it. And, not only does it contain Nick Perri’s fantastic guitar playing, but he has stepped up to the vocal mic and is singing his ass off.” – Charlie Starr

“The guitar playing, the tones, that drum groove, the hook…everything about it is infectious.” – Mark Agnesi

“Feeling Good” features Perri on lead vocals and guitar, Justin DiFebbo on Hammond organ and synthesizer, Brian Weaver on bass, Anthony Montesano and Michael Montesano on backing vocals, and Zil Fessler on drums—all of whom originate from Philadelphia.

“Back when I wrote ‘Feeling Good,’ I wanted to sing about being grateful for what you have and not relying on material goods for happiness,” said Perri, who—embracing his roots—delivers a hook-filled chorus and minute-long guitar solo in the track. “In light of this current year, however, I believe the song can take on further meaning and purpose. At the end of the day, I hope ‘Feeling Good’ can inspire and uplift listeners. I think spreading positivity, especially during a time like this, is important.”

Vinyl and CD copies of SUN VIA are now available for pre-order here https://linktr.ee/nickperri; the album is also avail- able for pre-order on all streaming platforms. SUN VIA’s official release date is set for August 14, 2020.