A lush canopy of swaying palm trees overhead, a cool consistent sea breeze, and a warm kiss on my shoulder. The receding sun preceded my plunge into the hidden paradise that was the North Beach Music Festival. I was assured of a unique experience because the festivities were the first edition of what is to be an annual occasion. To me, the location was ideal. The festival took place on picturesque Miami Beach. The event’s main aim is to provide a platform for bands and other talented performers to engage with the residents of Miami who are live music enthusiasts, like me.

The 2021 event featured a diverse and sophisticated collection of exciting and stand-out artists. What I like about the festival was the different musical genres. The performance featured electronic music, rhythm, blues, oldies, acoustic, and even soft rock and roll. This approach ensured that there was a little bit of everything for everyone. This was quite an achievement because, despite the fears surrounding COVID-19, the event still managed to attract a sizable crowd. In addition, I was genuinely impressed by GMP Live and The Rhythm Foundation because it was all about their efforts jointly and as separate organizations. 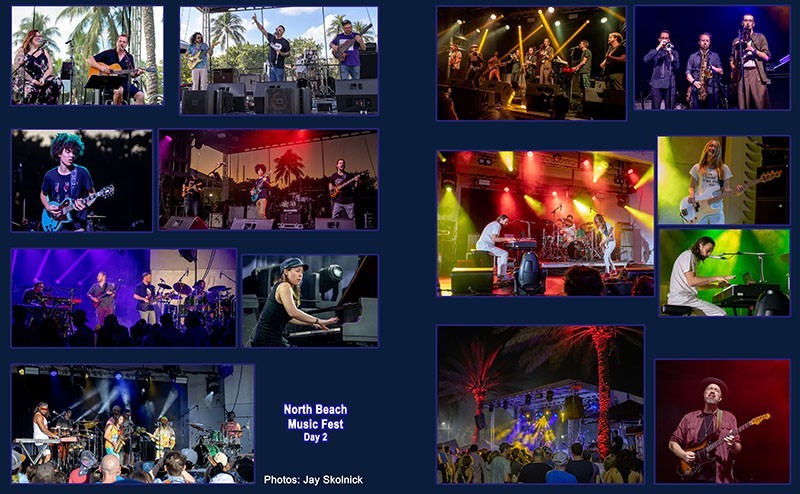 GMP Live and The Rhythm Foundation organized the festival. GMP Live is an organization that focuses on the promotion of concerts, festivals, and talent, which operates across the country, including South Florida. GMP Live runs Brooklyn Comes Alive, which takes place in New York, and features artists and other individuals from New Orleans. The performances include a fusion of funk, jazz, and jam band. They also organize the Live for Live Music concert in New Orleans and the Hollywood ArtsPark Experience in Hollywood, Florida. On its part, The Rhythm Foundation is interested in fostering cultural experiences which promote diversity in South Florida through live music. The organization was founded in 1988, which means it has cultivated a long-term relationship with the people of Miami, having held several shows and festivals over the years. This includes the TransAtlantic Festival and Big Night in Little Haiti. In 2015, the organization was awarded the management of the North Beach Bandshell, located on the oceanfront. The 1,400 seat venue provided the ideal location for the concert.

The North Beach Bandshell was optimized for the event in several ways for the concert. What I liked about it was the space available and well-structured facilities. I never got lost within its precincts, and the additions necessitated by the concert were well mapped out. For example, there were barriers and pathways set up for crowd management. Another element that impressed me at the Bandshell was the scenery. The location had palm trees that gave a cool shade during the day and a generally enticing environment during the night, especially with club lights lighting up from the ground. They also swayed from the cool sea breeze, making it seem like they were a part of the show. The location had one mainstage and a side stage. The mainstage was permanently set up at the Bandshell. It hosted most of the main acts and provided the main point of focus for the festival attendees. However, the festival also had a side stage which provided an exciting backdrop because it was facing east. The positioning ensured a clear view of the sunset in the evening as the performances went on. The North Beach Music Festival at the Bandshell did a great job combining modern lighting technology and the idyllic Miami beach background. A well-known artist also decorated the Bandshell.

The featured artist was Aileen Quintana. She is better known as Haiiileen, and her work is mainly experimental ideas. She has a unique ability to transform the sound she hears into an image. This allows her to be creative and establish herself as a disruptive force in the art world. She had also gone as far as featuring 3-dimensional items and installations. Her skills have enabled her to be a key artist for Tidal, Google and even served the likes of Space Miami, SoHo Beach House, and The City of Miami. She displayed her artistic works, which adorned various parts of the venue. Haiiileen has a beautiful aura, and I’m so glad I had the opportunity to meet someone with unique superpowers that helped her create sculptures and 3D art at the festival.

The event kicked off on Friday, and it was a massive take-off. In my mind, I expected the daytime programs to be subdued and feature artists who were, indeed, curtain raisers for the main acts slotted for the night. The complete opposite happened. The home artists took to the stage with aplomb. As a fan of local artists, I found myself jamming to music by The Heavy Pets and TAUK. TAUK, in particular, elicited a strong crowd response when they performed songs like Moon Dub and Dormammu. I was greatly entertained by The Horn Section, which came in to perform with TAUK giving a unique feel with their collection of horns. They would do the same during Pigeons’ Playing Ping Pong’s set later that night. The proceedings also featured renowned Florida-based guitarist Garruli who was a crucial part of the proceedings. His guitar riffs in the background of both The Heavy Pets and Tand’s shows brought out a unique and impressive dynamic. Karina Rykman also stood out with a high-energy set. That kept the tempo high and the fans on their feet. Because of the easy transition between sets, I was able to catch the performance by Electric Kif which took place in the warm glow of the sunset on Friday.

Saturday at the Festival was just as impressive. At the start of the second day, we were serenaded by Holly Bowling. She performed songs like China Cat Sunflower, and I Know You rider. Bowling took us on a journey showing her range by including an item like Phish’s Divided Sky. After her performance, Jennifer Hartswick and Brendan Bayliss presented their rendition of oldies by Bob Dylan, Derek, and Dolly Parton. The main thing that stood out was their vocal capabilities backed by a high rhythm and vocal clarity. Over their performance, Hartswick and Bayliss unveiled their new brand name, which they called Hartliss. On Saturday afternoon, Brandon “Taz” Niederauer gave an impressive account of himself, a true rock star from birth.

I cannot overlook the role of The Horn section in making the event more colorful and exciting. The Horn section featured in The Heavy Pets, TAUK, Electric Kif, The Motet, Pigeons Playing Ping Pong, Eric Krasno & The Assembly, and Aqueous. They were pretty prominent when they took the stage with Aqueous in their performance of their song Weight of the world. I felt that it was a one-of-a-kind rendition of a ubiquitous song among local fans. The Horn Section also did some of their solo work and proved their capacity as a unique set of musicians.

I have to say that the North Beach Music Festival was one to remember. Since it was the inaugural event, much of the efforts were directed towards bringing in a diverse and exciting group of performers. GMP Live understood that the event would be graced by many fans from Florida and all over the country. On the one hand, the lineup was ideal for the homegrown fans who had a relationship with the local acts. But, on the other hand, the lineup for the event also took time to present items aimed at the many out-of-town visitors and trip makers. Homegrown talents based across Florida, like Juke, Tand, Electric Kif, The Horn Section, and The Heavy Pets, did a great job. Moreover, there were artists from all over the country who were well established and household names. The artists ranged from, Tauk, the Motet, Ghost-Note, and Spaffords. The event wouldn’t be complete without the feel of instrumentalists like Erick Krasno, Marco Benevento, Holly Bowling, and Karina Rykman. Overall, these acts combined to create a memorable experience worthy of the time and resources to experience it.