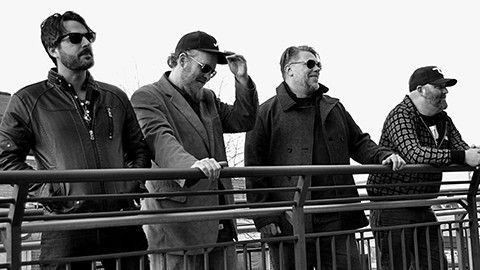 Jam band Perpetual Groove will be making their way through Culture Room in Fort Lauderdale on Saturday, December 4th. The current East Coast trek coincides with their new 4-song EP, C’mon. Covers. Since forming at Savannah College of Art and Design in Georgia back in 1997, Perpetual Groove’s distinct sound has toured the country extensively, playing multiple music festivals, as well as Europe and Japan. SFL Music and I recently had the pleasure to discuss Perpetual Groove’s current tour and release with keyboard player and vocalist Matt McDonald, as well lead vocalist and guitarist Brock Butler.

SFL Music: South Florida music fans are certainly looking forward to experiencing Perpetual Groove onstage at Culture Room. Do you guys have a favorite venue?
Matt McDonald (Keyboards and Vocals): We tend to like them all. The Colorado gig just got moved to March. There’s been a lot of weird movement with the tour this year for obvious reasons. Brooklyn Bowl and Culture Room are always favorites. There are a lot of great venues on this tour. Brighton Music Hall up in Boston is pretty cool as well. We’re glad to have all of these shows, but it’s been a weird year with many shows getting moved around or canceled due to covid.

SFL Music: What can we look forward to seeing onstage that we’ve never experienced before?
Matt: These dates that we are getting ready to do are going to be the last with our drummer Albert Suttle (joined the band in 2001). We’ve already been doing shows with our new drummer Darren Stanley, who lives in the Atlanta area. He’ll be taking over fulltime starting next year. We’ll be going through the whole catalogue with Albert for these last few shows that we have with him. So that’s a little different from the norm.

SFL Music: I know this tour coincides with your new 4 song EP C’mon. Covers, released in September. On the release, you do some cool songs, like “Digging in the Dirt.” How did that project come together?
Brock Butler (Lead Vocals and Guitar): Our choice to do all covers was born as an idea for us all just to get together and have some fun. Everybody threw songs into the hat, and I think we knew that we were going to touch on at least one or two songs that we’ve been covering for years. The idea was definitely there to try something that wouldn’t be super obvious choices, like the Go-Go’s. We really reworked it and changed it.

SFL Music: Your sound has been described as a combination of rock and indie electronica. Is that an accurate depiction of Perpetual Groove onstage and in the studio?

Matt: Yeah, I think that’s a pretty accurate description. In the early 2000s, fans had dubbed us Trans Arena Rock. I always liked that.
Brock: We touch on a lot of different genres. We’re definitely a rock band. Maybe psychedelic indie rock ‘cause we will stretch it out and swing for the fences sometimes.

Matt: We did a live stream at Music Matters in September of 2020. That was really the only performance we did at all last year. That’s a good example of things changing pretty drastically for the band. There was a video wall that surrounded us. People bought tickets to be Zoomed into the video wall. I think it was about twelve or thirteen songs that we did. It lasted almost 2 hours. Albert couldn’t make the journey from Oklahoma, so those were the first shows that we did with Darren just because he lives in Atlanta. That ended up being a catalyst that brought about some changes in the band. Earlier this year, we also did some outdoor shows. They were mostly in Georgia and then South Carolina. Those were the first proper shows that we had done since the beginning of the pandemic.

Brock: The footage of it came out incredible. They had a multi-camera crew in there, and we were totally encompassed by a video wall that encircled the band. They were bringing in Zoom calls from ticketholders while we were playing, and they used the video wall to add some graphics onto the stream. It was a very cool experiment, and I think it was very unique. That ended up bringing Darren in, who would eventually become our fulltime drummer. For a lot of bands, including us, covid was obviously a time of change. We tried to stay busy. We did some live stream album listening parties with our fanbase very early in the pandemic. I am talking about March and April when it first started going down. We made a video for the song “Heroes” while we were all in quarantine. It was a mash-up of the David Bowie and the Peter Gabriel versions. We opened with the Peter Gabriel string version and that morphed into the Bowie one. It was a fun project. Then we took all of the profits and submitted them to some nonprofits that were focused on the healthcare field at the time. Eventually, we made the covers album in March of this year.
Matt: We tried to stay pretty busy for the most part, while still being able to enjoy the downtime. We’ve been a band for a long time now, so we had the infrastructure to ride out the pandemic. I feel for these younger bands that maybe didn’t have the history or their business set up the right way to survive the pandemic. For the most part, we’ve been fortunate. We are just hoping everything goes well on this next set of shows. We don’t want to be one of the bands that has to cancel because somebody has a breakthrough infection. We are all vaccinated, and everyone takes all of the precautions on the road. We have already gone out and done some weekend warrior shows. Everything went great. It’s a little bit of a different world, but no complaints. We’re still not there. But as the year goes on, things will start to feel a little bit like normal.

Matt: That’s right. We haven’t done Amberland in 10 years. We’re bringing it to the Woodlands Nature Preserve. It will be just us, no other musical acts, which is how it was for a very long time. There will be three Perpetual Groove sets a day. We’ll do a Friday night preparty. That’s where you will see us with a bunch of friends and guests. Then on Saturday and Sunday, we’ll be doing our little festival.
Brock: I think we are very happy to get back out there and do it. As far as Florida in particular, we always love working with Culture Room, as well as playing over in Tampa and St. Pete. I think everybody is extremely excited to be back out there doing it.