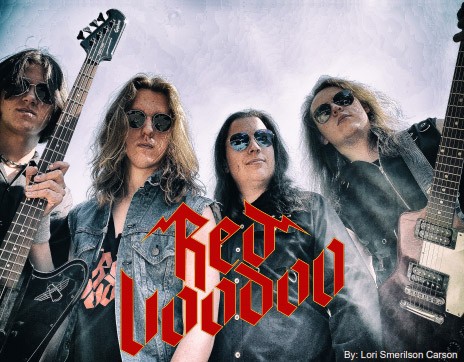 The past six months have been a cluster of depression, isolation, fear and confusion on how exactly handle this COVID-19 pandemic, but leave it to a group of young, intelligent, talented musicians to come up with a perfect solution. Their debut single “Rise Up!” produced by guitarist Frank Hannon of Tesla (at Frank Hannon Productions), is hitting the airwaves, sending positive vibes and making a definite mark on the music industry.

Catching up with Lead Vocalist, Rhythm Guitarist Dino McCord just after the release of “Rise Up!,” he explained how he and bandmates Guitarist Davin Loiler, Bassist Andrew Edwards and Drummer Nick Pesely, came up with the song, how their new album is developing, some of their influences, how they came together and what fans can look forward to.

SFL Music: Tell me how your new song “Rise Up!” came about. I know the idea came from the pandemic, but explain that.

Dino McCord: Yeah, totally. Just to let you know, I’m 17 years old. I just graduated high school and that’s kind of right when I started to write the song. I live in downtown Sacramento, and people just dodging each other and it was really uneasy. I was bummed because my graduation was canceled. I took a drive on a back road to get away from it all and I started to think to myself, just rise up man, be strong, and got home that night and started writing it down on pen and paper and pulled out my acoustic guitar, and that was the beginning of “Rise Up!.”

SFL Music: So, you wrote the lyrics and the music?

McCord: I wrote the lyrics and the melody and kind of wrote just the basic chords. It’s a three-chord simple song, and then I messaged it to Frank Hannon and we kind of went from there with the band.

SFL Music: That’s wonderful that he is working with you guys. What would you say you have learned or that he’s helped you guys with?

McCord: Frank’s just a great guy all around. The one thing that the band has taken away from his teaching, we’re still working with him and it’s going awesome. We have some really cool stuff coming up, but anyways so, the song writing. We’ve learned a lot with arrangement of songs and how certain parts fit together and really just what makes a good song, and that’s what Frank saw when he heard “Rise Up!” Just the basic parts of it.

SFL Music: There is a bit if that Tesla influence, along with a few others that you’ve mentioned previously like Sammy Hagar, Def Leppard, Mötley Crüe. Would you say those bands are your personal inspirations?

McCord: Well, Sammy Hagar is by far my biggest influence and inspiration, and a lot of our new material that we’re writing now is based off of the techniques that you know, Van Halen used and Sammy Hagar used.

SFL Music: What is it about Sammy that is so inspiring to you?

McCord: Well I mean, like Sammy Hagar’s melodies and Eddie Van Halen, just the certain techniques he uses, and one thing that you’ll hear in “Rise Up!” that’s very prominent in the song, is that big chorus. You know, that ‘rise up’ that Dave and Drew, they sing. That’s one thing that we’re really are proud of in the band is our backup vocals that Van Halen uses as well in their stuff.

SFL Music: You guys are really tight. Sounds amazing! Did everybody have professional training?

McCord: No, no. I’ve only been singing for about two years. I didn’t really know I could sing. About two years ago after I saw Sammy Hagar live in concert. It was like one of my first shows, and I just started singing 5150 (released in 1986) and OU812 (released in 1988), those great albums in the shower and just building up my chops, and then I was like whoa, I think I could actually do this! The rest of the guys, Nick, Drew and Dave, they have had no professional training. So, a lot of its YouTube and just kind of, you know, from our parents. Our parents are all musicians, so they’ve helped us.

SFL Music: Your dad worked with Frank with his own band?

McCord: Yeah. So, my dad was in a band in the Sacramento, California area scene where I’m from now, and Frank worked with him producing his band. Unfortunately, they didn’t go anywhere because it was the late 90’s and Nirvana came in and just swooped in, (he chuckled). So, Frank worked with my dad, but it’s kind of cool. It kind of went all full circle.

SFL Music: Is that what inspired you to go into music as a career?

SFL Music: I’m sure he’s proud of this endeavor that you’re on. 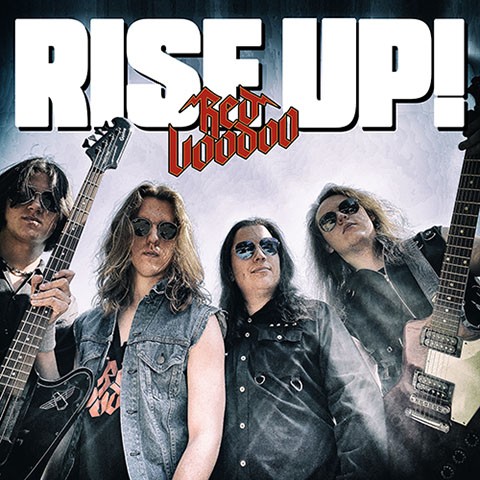 SFL Music: Tell me about the album.

McCord: We’ve been really working hard and soon we’ll be recording our EP, four or five songs that we’ll be releasing before the album is made. Just to give people more of a taste of what we’re really like. Pretty much what I could say about the album would be, we’re just a California party rock band you know, just wanted people to have a good time.

McCord: Yes. You know we just played. It was super awesome Lori. We played a Monsters Of Rock Cruise live stream over the past weekend. We just got back from L.A. two days ago, and that was off the hook!

SFL Music: Are there going to be any more of those?

McCord: I don’t know right now, but you could for sure you know, go to our official page (redvoodooband.com) and watch It if you haven’t seen it yet. It’s very cool!

SFL Music: I’ll have to do that. What do you think differentiates your live shows from others?

McCord: Well, I would say that we’re all important as the band, so like all of us move. We have Dave and Drew that’s running around. I’m running around. I mean, we’re pretty much really fun to watch is the main thing and you know, we play with passion and we play with soul and we really feel it, and we smile. That’s the one thing. You think of rock bands and you’re like err, but we want to smile and make people have a good time.

SFL Music: Is there anything else that you guys are getting ready to release besides the video that’s out for “Rise Up!”? Are there any more coming down the line?

McCord: Right now, not yet. We’re really just working on this EP we got going on, but we would love to do another music video when the album releases.

SFL Music: Is there a date for that?

McCord: Not just yet. Probably like the videos, maybe 2021 or later this year.

SFL Music: Well people are going to love it. “Rise Up!” the hook, it sticks in your head. It’s still in my head.

McCord: Hey, that was the plan, (he laughed).

SFL Music: I won’t sing it to you, ha ha! What would you recommend to an up and coming band with what you have learned from your experiences?

McCord: One thing that Frank has taught us is that, don’t rush to put something out there because you’re all excited and you’re all ready to make your mark in the music business and stuff, but if you want to do it right, you know, it took months. Like I said, I wrote “Rise Up!” in February and we released it in June. So, it took a little bit to release just one song. So, if you’re lucky enough how like we have been to work with someone great and get that experience and I could pass that on, is to just make sure the songs are really good, and rework the songs as many times until they’re just right. Get people’s opinions on them, and it takes hard work at the end of the day you know, but if it’s your passion and you love it, then you won’t mind doing the hard work.

SFL Music: That’s great advise. My daughter didn’t have her graduation ceremony either. Any inspirational message you want to send out to people who are in those shoes?

McCord: Listen to the song “Rise Up!” (he chuckled). 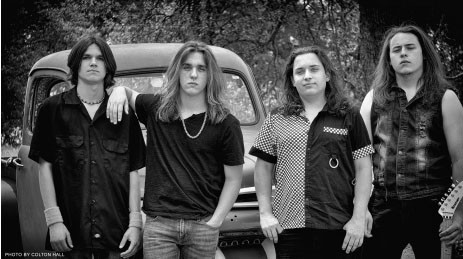 McCord: You know, I’m feeling for your daughter ‘cause we didn’t get graduations, and I don’t know what she did, but we just kind of had like a drive, by get your diploma in the car. Kind of like a fast food restaurant, but it was graduation.

SFL Music: We had a family Zoom, walk across the living room, mock graduation. Congratulations to you. Good things will come your way. I have to say, your generation has been very uplifting and very in tune with what’s going on in our society. What do you think plays into that? Do you think it’s all the social media that your parents and myself weren’t exposed to? Do you think that forced your generation to be very wise and worldly?

SFL Music: True. So, once you can play live, that’s the plan down the road?

McCord: Oh yeah! The boys are itching for a tour man. It’s crazy!

SFL Music: How did you guys get together to form RED VOODOO?

McCord: So, I met Nick Pesely, great drummer. I mean, that guy is super influenced by Neil Peart from Rush and just an overall great attitude type of guy, and Nick and I met at a Y&T show. You know the band Y&T? We met at a Y&T show, and then he knew a guy Davin the guitar play. He walked in and shredded like Eddie Van Halen, and we found Drew the bass player on Craigslist out of all places. Nick’s 21, Drew’s 18, Davin’s 18 and I’m 17.

McCord: Yeah, that just shows how influenced we are. One of our music that’s coming up, this EP shows that a lot. Yeah, it just fit us, and it was kind of a cool little, we paid homage to Hagar, but also, it’s an original name. No other band has it.

SFL Music: It’s perfect for you guys. Was there anything else that you wanted the readers to know?

McCord: I will say this. So, we are releasing a song soon called “Bring It Back” and that will be on the EP I believe. This is usually for like listeners to pass on to their kids that are my age. You know, I’ve talked to a lot of kids my age, and they haven’t really been exposed to rock and roll music and the whole kind of philosophy. The first song we ever wrote as a band, “Bring It Back” and it’s about bringing rock and roll back, not only to your generation of new rock and roll artists, but also to my generation who’s never really listened to rock and roll, especially from peers our age. Yeah, the main thing we want to do is, we want to bring rock and roll back to our generation.

Well, SFL Music readers, when you hear (and see the video) “Rise Up!” you will definitely realize RED VOODOO is a rock band to add to your classic collections!