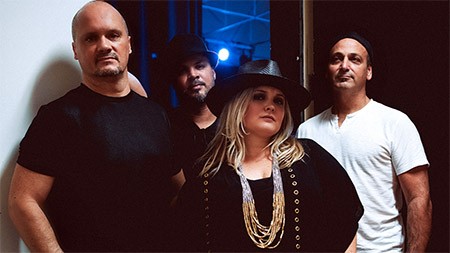 The Samantha Russell Band announced recently that it has been hired by the 2020 Super Bowl Host Committee to perform as the closing act on Thursday night of Super Bowl LIVE, January 30th at Bayfront Park in Miami.

Randi Freedman, VP/Producer of Super Bowl LIVE & Events, commented to band manager Ryan Rose that after seeing The Samantha Russell Band perform at Margaritaville Hollywood Beach Resort amphitheater and hearing their mix of up-tempo, danceable classic rock, pop and country, she was eager to have the Jupiter-based band, which celebrates their 10th anniversary in 2020, perform at this well-attended and high-profile event.

From having an original pop song distributed by WEA (Warner/Electra/Atlantic) and charting on the Billboard Adult-Contemporary Top 40… to opening for Chicago, Dierks Bentley, Travis Tritt and many others… to firmly establishing The Samantha Russell Band as a hot and sought after act on the South Florida music scene, Samantha is living her dream of entertaining crowds at restaurants, bars, fairs, festivals, casinos, clubs, and private parties with her passionate performances. Backed by professional and experienced musicians Rui Pinto (drums and vocals), Diego Fagundes (lead guitar and vocals) and Frank Scavone (bass), The Samantha Russell Band performs about 130 shows annually from Vero to, now… Miami.

Super Bowl LIVE is a free, weeklong, open-to-the-public, fan fest leading up to the Big Game. More than 1 million people attended Super Bowl LIVE at both the Houston and Minneapolis Super Bowls and historic crowds are also being planned for in Miami. Organizers are expecting Thursday, Friday, and Saturday of Super Bowl LIVE to be the busiest. While 2020 is the 11th time a Super Bowl has been played in Miami, this will be the first ever Super Bowl LIVE in South Florida. The event also features a culinary stage, environmental village, water shows on Biscayne Bay, evening parades, fireworks and more.

When asked by the Super Bowl Host Committee for her thoughts on having been selected, Russell said, “Playing Super Bowl LIVE is the SUPER BOWL of performances, so we are stoked! The boys and I are especially excited to be a part of this incredible event that leads up to the Big Game here in our beloved South Florida—we love a good party! Live music is big part of the fun that is Super Bowl LIVE, so we’re going to deliver a rocking set that’s sure to have football fans cheering as if their team just made a touchdown!”

Visit the official website of Super Bowl 2020 at www.miasbliv.com for additional info on Super Bowl LIVE. Learn more about The Samantha Russell Band at www.samantharussell.com or on Facebook at @samantharussellmusic.