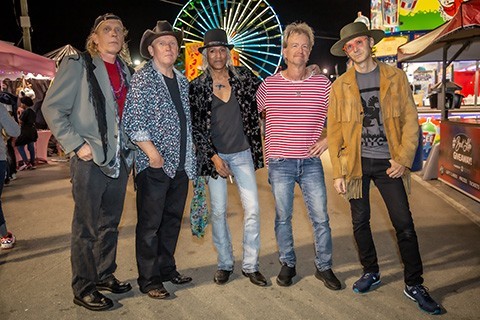 It’s a question that can be asked about every band’s moniker: What’s in a name? In the case of Lake Worth Beach-based rock quintet the Cravens (cravensongs.com), the answer involves a long and winding road — one filled with peaks, valleys and potholes serpentining through the Eastern Seaboard of the United States into the Canadian province of Quebec.

As it is with any veteran musical entity, it’s those road experiences that shaped the lineup of sibling singers, songwriters and guitarists Bill and John Storch, lead guitarist Ron DeSaram, bassist/vocalist Dennis Ambrose and drummer/vocalist Bill Meredith. The band’s third CD, Cravenology, was completed in 2021 amid COVID-19 complications, and features nine tales of subject matter ranging from loss and longing to veiled socio-political commentary.

“I see Cravenology as a progression,” John Storch says. “Some people say we have a signature sound, and if that’s the case, I think this CD crystallizes it. I can’t wait to record newer songs and see where else we can take it.”

The short answer to the name question arose out of Montreal, where the Storch brothers and DeSaram discovered a cigarette brand called Craven A. But that’s part of a back story filled with twists and turns.

“It was primarily me who discovered those Craven A cigarettes back in the 1990s,” DeSaram says. “But we all ended up smoking them then.”

“That was back when we often traveled north to Montreal, just for fun,” says Bill Storch. “It was a great city for pleasure trips.” 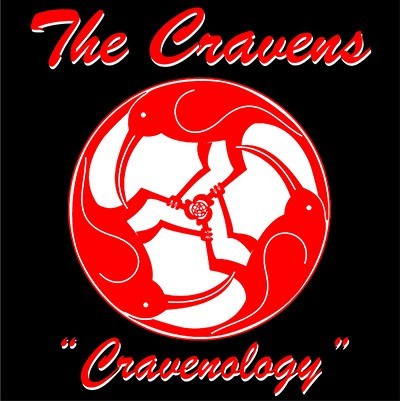 Flash back to the 1980s, when the groups Ata-Tat and Crossfire Choir mixed and matched the Storches, DeSaram and Ambrose with other personnel locally and north to Boston and New York City. By 2000, everyone other than Ambrose had moved back south, leading to the initial trio version of the Cravens, a quieter, introspective entity featuring the Storch brothers and DeSaram in 2014. The group’s manager ever since has been Nancy DeSaram, Ron’s wife.

“Even when they were writing and arranging as a trio, everything was tailored toward the sound of a five-piece band,” she says. “So they’ve blossomed by becoming more full and energetic. The songs were always strong, but they’ve now reached their full potential on recordings. And the live performances have transformed into high-energy quality worthy of, I think, national attention.”

The Storch brothers first became aware of Meredith, a longtime South Florida music journalist, when he contacted them to write about their various projects in the 2000s, from roots music group the Sewing Circle Sues to ballet scores for Demetrius Klein Dance Company. The siblings and DeSaram then recorded tracks with the drummer and his now ex-wife, violinist Ginny Meredith, in 2009. The results became the 2019 Cravens release [i]Early Bird Special[i], a lighter, introspective mix that split the difference between the trio and current lineups. Meredith first made the Cravens a quartet in early 2016, as DeSaram and John Storch alternated between guitar and bass chores.

But the compositions yearned for a three-guitar tapestry, with each musician playing interlocking lines until DeSaram kicked into one of his screaming or effects-laden solos. The guitarist plays rhythm guitar like Keith Richards; solos like Mick Ronson and resembles a Sri Lankan version of Jimmy Page.

The Cravens thought of Ambrose from roads traveled both near and far, and contacted the bassist, who was now living in New York City. For a year, he flew down to join the band for area gigs before relocating to South Florida in 2017 and rounding out the quintet.

“I’d given up music, basically,” Ambrose says. “I hadn’t played in a band for years until I flew down for Ron and Nancy’s wedding. They had a big rehearsal hall, and at one point it was the four of us playing with Ron’s cousin, drummer Perry James, who’d flown in from Boston. And things just melded into place. I knew then that if it worked out going forward as a band, I’d be totally into doing it. That was the turning point that sparked my interest in playing again after seven years.”

Ironically, all five future Cravens traveled the roads through the Northeastern U.S. and Canada at the same time in the late 1980s. They just didn’t know it. 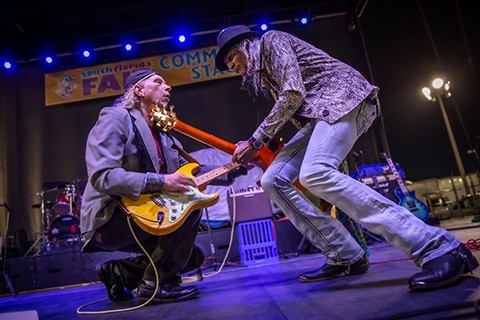 “I was in Montreal playing with a band called Big City in 1987-1988,” says Meredith, “and managing a music store in New Jersey in 1988-1989. But I only knew Ron from high school to that point, and we’d only jammed once shortly after graduating. I initially reached out to Bill and John to write about their songwriting and versatility and didn’t meet Dennis until he started playing with the band in 2016. But our rhythmic groove was effortless right away. It was like playing with John Paul Jones from Led Zeppelin.”

That British supergroup is but one of The Cravens’ primary influences, and others denote these five Floridians’ penchant for classic rock and pop artists from across the pond: Rolling Stones, Beatles, Bowie, Faces, Cult, T. Rex, Sweet,, Fleetwood Mac. Add more recent American influences, from Dave Grohl’s Foo Fighters to blues artist Samantha Fish and Ohio-based, teenage punk-influenced rockers Detention, and you get a collage of practically every modern musical tributary.

The Cravenology release party, held last November at Mathews Brewing Company in Lake Worth Beach, brought it all together for an appreciative capacity crowd. Videos are available on the band’s Facebook page.

“It was a rock and roll circus,” says Nancy DeSaram. “The energy was like Madison Square Garden. I had so many people tell me that night that this was one of the best South Florida original rock bands they’d ever seen. There was a lot of anticipation toward Cravenology, and the CD, and performances like that, showcase the Cravens as a next-level recording and touring act.”