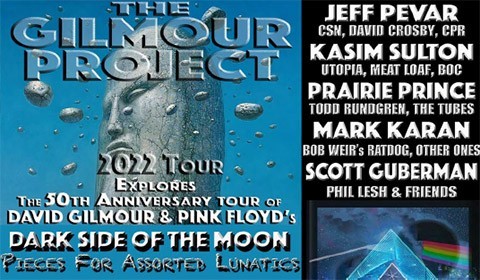 The Gilmour Project will be performing at Revolution Live in Fort Lauderdale on Wednesday, June 8. SFL Music had the opportunity to chat with bass player Kasim Sulton, also known for his work with Utopia, Meat Loaf and Blue Oyster Cult before the show.

SFL Music: What’s the difference between a tribute band and The Gilmour Project?
Kasim Sulton: The way that I look at it, tribute bands tend to be an exact, or close to an exact copy as they can get to the original music. Rather than trying to play note for note, I like to consider us a celebratory band. That’s what The Gilmour Project is. We have taken liberty with some of the music. There are certain songs that we recreate just like it is on the record. But there are certain points during the show where we will stretch out and add our own flavor. There are five musicians up there with a lot of history, a lot of wisdom, and a lot of talent. So there are parts during a show where we’ll make a solo a little bit longer. In my opinion, that’s the difference between a band that celebrates the music and a tribute band.

SFL Music: Is there a specific reason you’re named after David Gilmour, not Pink Floyd?
Kasim: When we started this, we were concentrating on David’s contributions to the band.

SFL Music: That means you skipped the first two albums with Syd?
Kasim: Yes. However, there is material from those two albums that we now do, like “Echoes,” “There’s No Way Out of Here” and “Fat Old Sun.”

SFL Music: Very cool. Tell me about Revolution Live on your 29 city tour. Have you played South Florida?
Kasim: I have played every place around, from the (Fillmore) Jackie Gleason Theater on Miami Beach to Tobacco Road and every other place in Fort Lauderdale and the rest of the area. I’ve played at Revolution Live a bunch of times over the years.

SFL Music: So you guys will be recreating The Dark Side of the Moon. As a classic rock lover, that’s obviously one of my favorites.
Kasim: There is some material that we take liberties with. But Dark Side, we will pretty much be true to the original record, top to bottom, note for note. I have to say that The Gilmour Project is one of the best bands I have ever been a part of. I encourage anyone, Pink Floyd fan or not, to come out and see the show. The musicianship in this band is absolutely fantastic.