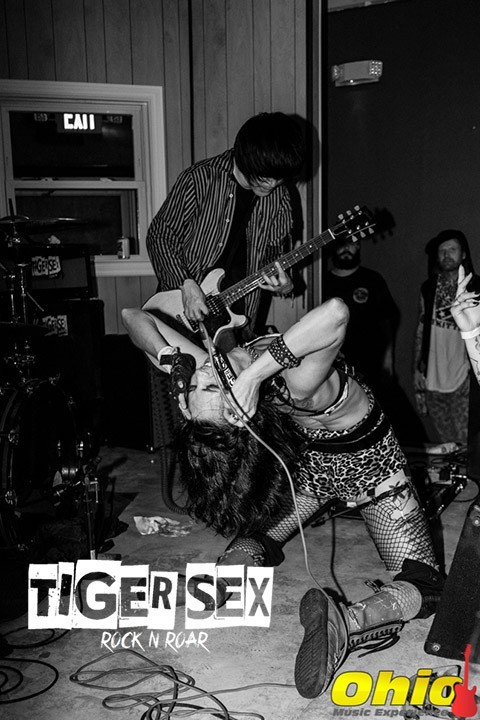 When times are tough, music sustains us. Our old favorites and new ones. New bands keep music strong and Tiger Sex is definitely one that has shown audiences how powerful they are. This extraordinarily talented punk rock/rock band’s concerts are not just amazing music, but a totally enjoyable experience for everyone.

Catching up with Lead Vocalist Kelly Chelston, she revealed some details about their music, how this three-piece band came to be and what fans can look forward to.

SFL Music: How did the band come together? Great name!
Kelly Chelston: So originally, we’re from Vegas. I moved to Vegas and I used to like try to check out what’s going on around town, and I saw this really cool band called the Tinglerz. That’s how I met my guitarist. He was in that band. He was singing and playing guitar, and I thought they were the coolest band I’ve seen in a long time, and I’m like, hey. Why don’t we, you know, hang out and jam together or something, and I really didn’t think much of it. Of starting a band. I just wanted to do it for fun. We just kind of got together. We had the same exact taste in music and I’ve always wrote poetry, and he’s like, “why don’t instead of just jamming covers, we write some songs,” and so, like yeah. I could do that. Why not? And we just kind of started writing together. We kind of just started like that, organically.

SFL Music: So, did you take the Tiger Sex from the Tinglerz or how did that come about?
Chelston: Oh, no. So, Tiger Sex. It’s so weird. We went to a Chinese buffet, and we were eating at one of the casinos and it was really good and we were sitting there talking. I’m like, so we’re gonna start a band. What should we call it? And you know, my butt is tattooed in tiger stripes and my hips, and I’ve always loved big cats, and I never thought it would become a band name, but we were like well, tigers are cool. It was gonna be like Tiger Comets or Tiger Space, and then we were like why not Tiger Sex? It stands out. It is what it is. There’s the Sex Pistols and stuff like that. So, we just thought it was cool.

SFL Music: Were the Sex Pistols one of your inspirations? What made you go into music as a career?
Chelston: Well music, I was raised on. My dad raised me on The Beatles and stuff like that. Then I had an uncle that lived in New York in the CBGB days, and he got me into like the Ramones and the Dead Kennedys and Crime and stuff like that. The Cramps, and somehow, I don’t know, I just always loved the music. You know, I played a little rhythm guitar, but I always wrote poetry. Somehow, I don’t know. We never thought it would come to this, but somehow it did (she laughed). 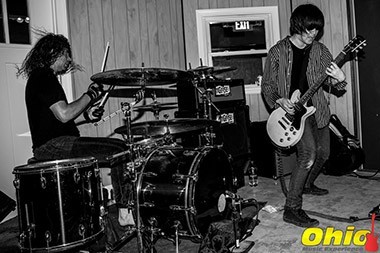 SFL Music: Did you take any formal lesson or did you teach yourself?
Chelston: I just started doing it. I never took lessons or anything.

SFL Music: Your live shows are so full of energy with the audience interaction. How did that come about? Was that just kind of a natural thing?
Chelston: Yeah, you know it’s so weird. Like the first gig, I could barely move. I was in fear. I was trembling, and then after the first gig, it was like the ice just broke. Then I just naturally would like, I feed off of people. So, my animal feeds. They’re the antelope and I’m the lion. As long as they’re there, I feel like I’m there. When I see their energy, I get pumped with more energy and it just kind of happens like that.

SFL Music: So, you connect with the audience sort of naturally?
Chelston: Yes.

SFL Music: That’s very cool. What inspires your music? What inspires you when you write?
Chelston: My inspiration, it comes from you know, just listening to music in general of course, but I would say I get inspired off of seeing other underground bands play. I get inspired from travel and like checking out venues around the world. Talking to people. My life experience. Like growing up was really hard for me. I had a rough childhood and I sometimes feed off of the negative energies in my life and you know, just living I guess really inspires me. Surviving, you know?

SFL Music: What inspired songs like “Buy Me A Drink”?
Chelston: Well, “Buy Me A Drink”, that was supposed to be like a break song for me because you know, I go really hard at it when we play, and that ended up being a pretty wild song. I usually need something to drink onstage. I do like my alcohol and you know, that songs funny because people will just line ‘em up and I’m like, oh no! What have I done?

SFL Music: So, they actually get you drinks while you sing “Buy Me A Drink”?
Chelston: Oh yeah. It gets me in trouble, yes. 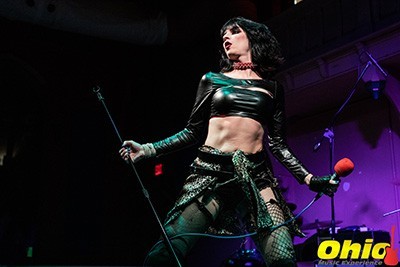 SFL Music: What inspired “Trouble”?
Chelston: “Trouble”. We really like the band Black Flag and stuff like that. Like eighties hard core kind of inspired me on that one. Just like a wild dirty youth in a sense. Just let it go and go wild. Let your mind go and enjoy that moment. To me “Trouble” is more like that. Like a freedom of the mind type song.

SFL Music: What about “Can’t Take It”?
Chelston: “Can’t Take It”. I wrote that song about you know, I went through a lot of like depression growing up and like suicidal stuff and that was more like just not being able to take what was in front of me. So, that just kind of got involved within the song, I guess. To kind of inspire me in a sense.

SFL Music: That probably helps other people as well.
Chelston: Yeah, just taking the dark and actually making, not like making fun of it, but making like something good out of it in a sense.

SFL Music: What about “I Wanna Be Your Dog”?
Chelston: That’s actually a cover by The Stooges. Iggy Pop and The Stooges. We really like him. Our band is influenced off that. Great performer and that song somehow brings out you know, the demon in me. And everybody usually gets into it. It’s one of those covers that we kind of made our own, and we really enjoy how people react to it. 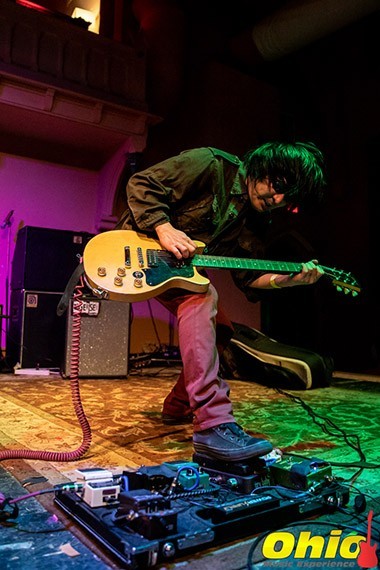 SFL Music: Is that how “Dancing in the Street” came about too?
Chelston: Yeah, well “Dancing in the Street”, we really like Detroit music. Motown and Detroit and just the whole history of it. We actually covered that for a Detroit benefit they were doing to raise money to keep venues alive during COVID. So, we did that and it was released last New Year’s Eve and yeah, it shows a different side to us. We’re not just all screaming. We can do more and bring it down.

SFL Music: Yes, I can see the variety that you have. That’s hard to do also. Now, Sex Tigers are playing in Europe this summer? How did that come about?
Chelston: So, we did play back in 2017. We got invited to play Rebellion Punk Music Festival. It’s one of the biggest punk festivals in the world. Over five thousand people go to it. We ended up making friends there. It ended up being really good for us and they invited us back this year. It was actually supposed to be last year, but COVID you know, did its thing.

SFL Music: When in the Summer?
Chelston: Rebellion’s the first week of August, but we’ll go at the end of July, and we’re planning on doing Germany as well. So, the U.K and Germany, yeah. That’ll be cool.

SFL Music: What can fans look forward to with the live shows? Anything new or different that you’re going to be doing this year?
Chelston: Well, we’re definitely going to be putting out new songs. We’re already working on new stuff. We just released a new song, so definitely new material. We’re gonna be recording, so putting out some vinyl and you know, they’re definitely probably expecting our crazy selves (she laughed). Just us being us.

SFL Music: That’s the way to be.
Chelston: Yeah.

SFL Music: When is the new album expected to be done or are you guys in the starting phases?
Chelston: We’re just in the starting phase because one of my members contracted COVID. We had to cancel it last month and then this month, we’ve been playing like so much. It’s been hectic between work and the gigs. So, we plan on recording this January and we’re just hoping to get it out mid-year. Hopefully before summer. 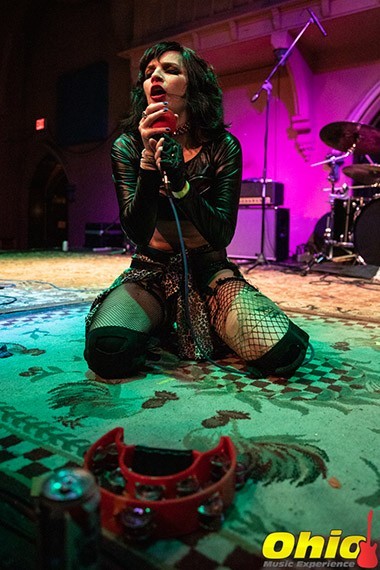 SFL Music: Is there any kind of theme to it?
Chelston: It’s probably going to be more of a live feel album. Little bit harder. Maybe you’ll be able to feel us more than our last album (Weirdo released in 2018) we put out. It’s something a little more natural, I guess.

SFL Music: Were there any more videos for people to look forward to?
Chelston: We’ll definitely put out videos with whatever new songs we decide to release. We’ve been doing all of our stuff. We’re a completely DIY band. We record all of our videos ourselves. We make all the videos. We’ve been recording all of our songs and we’re like alright. It’s time to hit the studios. It’s a lot of work, but we book all of our shows ourselves. All of our tours. We’re completely labelless, so it’s been tough.

SFL Music: Is that kind of your goal? With all of the media outlets, some people stick to doing their own thing. Are you guys looking to hopefully get signed soon?
Chelston: We’ve been offered on some underground labels, but I don’t know. I really enjoy doing it myself, you know what I mean? Like I feel like I have full control over what we do, but if the right label came around in the future you know, it really depends on what kind of people they are and what they have to offer in a sense.

SFL Music: Is there anything that you’ve learned so far that you would want to share with other new musicians? Any advice to give?
Chelston: It’s all a learning experience. My advice is the right members is everything. If you’re gonna have a band long-term, having the right people in the band is very important. They got to become your family or it’s not gonna work long and you know, compatibility and I feel like just being natural. Being yourself instead of copying what others are doing. Just do your own thing. Good things come out of individuality and something that’s different. And stay strong you know, like just stick with it and put all your love into it cause that’s the best feeling in the world is when you’re doing something you love.

SFL Music: That’s awesome advice. Is there anything else that you wanted readers to know about Tiger Sex?
Chelston: Well, we will be going to Canada as well this year. We won’t be there long, so it’s gonna be very short. Mainly, if they want to check out anything we’re doing, our social media outlets are updated every day. We have a website www.tigersex.info. We’ve been trying to keep up with that and it has videos, songs, merch. Everything you need to know. Our schedule. Yeah, just keep an eye out. We’ll be at a venue near you.