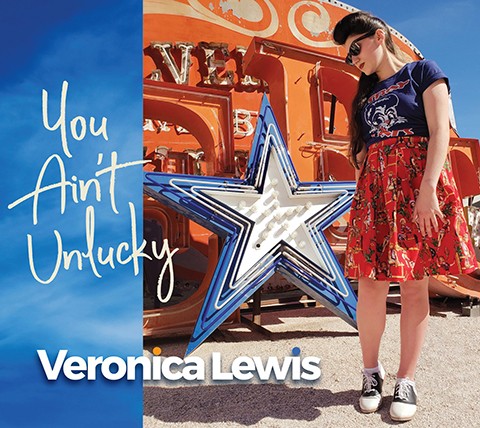 There are those, and many at that, who will tell you what a horrible year 2020 was, and sadly – they wouldn’t be wrong.  That said, I’m thinking that Veronica Lewis will not be one of them.  In 2020, Veronica Lewis won the “Blues Artist of the Year” Award at the Boston Music Awards; she also won the Boston Blues Challenge; and she was named the years “Best Young Artist” by the “New England Music Hall of Fame”.  On top of all that, Veronica is a four-time Granite State Blues Challenge winner and recipient of the 2019 W.O.W. “Rising Star” Award.  Factoring in that she’s only seventeen years old, she had barely entered adolescence as these awards started rolling in. With these kinds of credentials, I’m betting there will be many more years equal to or better than 2020 in this talented young lady’s future.

Veronica Lewis’ debut release, “You Ain’t Unlucky”, is self produced and contains six originals and two covers.  For the project, Veronica – on vocals and piano – is joined by: Mike Walsh, Ben Rogers, and Chris Anzalone on drums; and Don Davis and Joel Edinberg on saxophone.

The opening and title track, “You Ain’t Unlucky” not only showcases her piano skills but her energetic vocals, as well.  Displaying quite a range, Veronica testifies that there’s absolutely nothing wrong with an occasional bad day and that although something “may not feel good, that don’t mean it’s bad”.  The minute long piano solo midway through the track sounded as good as any I’ve heard from a lot of her influences and legends of the instrument.

On a song that hit the top of the charts on the folk, country, pop and R&B charts back in the forties; and was recorded by many great vocalists – including two of my favorites, Frank Sinatra and Dinah Washington – Veronica puts on what I believe is her best vocal performance of the disc.  The song is titled “Is You Is My Baby?” and I’m pretty sure everyone reading this will have heard the great Louis Jordan asking “Is you is or is you ain’t my baby?.  With her piano pretty much being part of an excellent musical performance with Mike on the drums and Don on the sax, this one features Veronica highlighting her other instrument – that amazing voice!

Being one of her biggest influences, Veronica pays homage to the “Swamp Boogie Queen” herself – the great Katie Webster – with a rollicking rendition of “Whoo Whee Sweet Daddy”.  With Chris adding a powerful drum rhythm and Joel smokin’ the sax leads, Veronica and the guys are dishing out a serious dose of good ol’ boogie-woogie at its finest.

Put on your seat belts then turn this one up real loud.  It’s a no holds barred tribute to another of Veronica’s influences – the wild one himself, Mr. Jerry Lee Lewis.  The track is called “Ode To Jerry Lee” and as kick ass as it is, it’s kind of a good thing that the track was only two-and-a-half minutes long…..I wouldn’t have been able to hold on any longer.  And at the pace Veronica and Mike were going, I don’t know if they could have either.  Great stuff you two!

The disc closes with Veronica’s interpretation of a magic carpet ride.  It’s a mythical journey, along with a bunch of her piano heroes, on “The Memphis Train”.  You can bet there’ll be plenty of barrelhousing going on as this train barrels down the line.

Other tracks on this very impressive first outing include: “Clarksdale Sun”; “Put Your Wig On Mama”; “Fool Me Twice”.