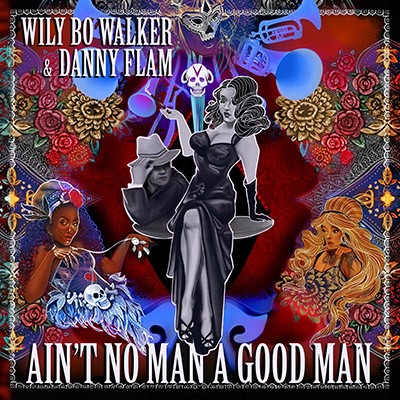 The last time Wily Bo Walker and Danny Flam collaborated on an album was back in 2015 and that project – “Moon Over Indigo” – wound up being nominated for a Grammy Award.  Well the guys are at it again, and they’re hoping for the same success with their second release –  “Ain’t No Man A Good Man”.
Shoring up their chances, they’ve assembled more top musicians and vocalists from the U. S. and the UK than I am able to list.  That said, joining Wily Bo Walker on guitar, electric bass, banjo, tambourine, percussion sound FX, backing vocals and storytelling; and Danny Flam on trombones, trumpets, sousaphone, Hammond and backing vocals; are: five other guitarists; eight other horn players; five other keyboardists; four bassists; four drummers; a string quartet; a three person Gospel Choir; and a few back up vocalists.  Now if you haven’t yet thought “wow, this album’s a lot goin’ on”, allow me to tell you it indeed does.
Of the ten tracks on the disc – which the band refers to as “Horn-driven grooves and Voodoo blues” – eight were written and/or collaborated on by Wily Bo Walker.

“Behind every great man is a great woman” is a phrase that absolutely needs no explanation.  On the other hand, saying something like “behind every no good man is a good woman, as well”, might…..so here goes.  Contrary to how it may sound, the original and title track, “A’int No Man A Good Man” does not mean there ain’t no good men.  That said, the song is actually about a woman – but not just any woman – you see, when it comes to seduction, this woman is so good a casting spells that regardless of the men it’s cast on, ain’t none of them can be good.   Musically, the song is as spell binding as its subject.  The significant and substantial horn section are as good as these ears have ever had the pleasure of hearing; Danny Flam’s trumpet leads and Mike Ross’s guitar leads are each more stinging than the other; the rhythm of Tommy Rhodes (bass) and Max Saidi (drums) is profound; and with a deep, raspy, powerful and soulful voice – one that I’m sure any guidance counselor would have told the possessor of to “forget whatever you’re thinking of doing for a living and become a blues singer” – Wily is absolutely masterful on the vocals.

Another of the original tracks is an old school shuffle titled “Did I Forget?” As in: did I forget to tell you I love you?; did I forget to tell you I needed you?; and did I forget to tell you I believe in you?  Those were all the things that Wily wanted to say but sadly, the drinking got in the way. Another fabulous brass performance with some serious baritone leads at the hands of Ron Bertolet; smoking blues guitar licks by way of Pete Farrugia; and a powerful vocal performance by Wily on which the pain and frustration of him not ever having the opportunity to say what he clearly needed to tell his woman can be clearly heard in his voice.
The first thing I thought when I heard “Walking With The Devil (Blood On My Hands)” was movie soundtrack.  As it turned out, Rick J Bowen – writer of the album’s accompanying one sheet – felt the same way about other tracks, as well.  Could “Aint No Man A Good Man – The Movie” be a thing of the future?  Interestingly, there’s a line where Wily Bo says “I’ve been walkin’ with the devil, the devil by my side” and between the spooky growl of his voice; the ear popping and eye opening range of Karena’s complimenting backing vocals; the intensity of the percussion and rhythm with those deep bass lines and the hands of Clarky on the double bass; and Mike Ross’ spine chillin’ guitar licks; Ya just gotta wonder if the whole collectively eerie vibe just might have the devils thinking “I’ve been walkin’ with Wily Bo Walker, Wily Bo Walker by my side”.

On the nearly one minute long intro on “Night Of The Hunter”, Michael Ross on guitar; Stevie Watts on Hammond; Danny Flam on the trumpet and trombone; Ron Bertolet on the baritone sax; Tommy Rhodes on electric bass; Max Saidi on drums; and Karena K on the keyboard and percussion; were in such a musical groove that they got me so looking forward to hearing this instrumental.  Then in came that unique, gravelly voiced growl and my grin grew wider.

Depending on who you ask and what you may read, “Saint James Infirmary” may be credited to any number of originators but in this case, we’re going with Irving Mills – which BTW, is actually an alias.  Along those same lines, if you ask anyone who has bounced in and out of the many music halls up and down Bourbon Street, there will be very little disagreement about it being one of the most requested songs of house bands. Being one who has often requested it and one who has heard it thousands of times I will tell you I’ve never quit heard a rendition like this.  Normally it’s done with a jazzed up slow blues type delivery but since these guys don’t do slow, this may be the the most uptempo, rocked out version, you’ll ever hear.

The disc closes with a song called “Build My Gallows (Ain’t No Return)” which is actually a differently done – yet still hypnotizing – version of the title and opening track – “Ain’t No Man A Good Man”.  This take uses a completely different ensemble which features extraordinary lead and slide guitar work by Troy Redfern, and magnificent string presentation by: Cenovia Cummins and Louise Owen on violin, Alissa Smith on viola and Laura Bontrager on cello. Collectively these ladies make up The Cenovia Cummins String Quartet.

Other tracks on this outstanding production are: “Velvet Windows”, “Ain’t Hungry No More”, “Time To Forget” (all originals), and  “Fool For You” (Stone McEwan).