Since unleashing his rising guitar force from Sweden in the early ‘80s and turning the electric guitar world on its ear, Yngwie Malmsteen has not let off the accelerator. He continues firing lightning riff after lightning riff. In support of his latest release, 2021’s ‘Parabellum’, Yngwie made Fort Lauderdale’s ‘The Parker‘ Saturday night June 4th the last stop of his tour. He reminded everyone that he IS the Godfather of Neo-Classical shred guitar!

As I arrived at my seat, I saw a very busy stage with 3 drum sets. I then found out that there were two opening acts.

The first band up was a power trio called Alpha Venturi. They hit the stage a few minutes past 7PM. The New York-based band formed at the beginning of the pandemic. They had a cohesion that belied the fact they have been together only two years. If they can keep it together, I’m sure we will be hearing more from them in the future. Their thirty-minute set was followed by one of the most efficient set changeovers I’ve ever seen. The second band, Kurt Deimer, hit the stage in less than 15 minutes later.

Kurt Deimer is a bit of a ‘renaissance man’. He is an actor as well as the front man of this powerful five-piece band. With Bon Jovi’s replacement for Richie Sambora, Phil X on guitar, these guys put on one heck of a performance! I definitely wanted to hear more than the thirty minutes they were allotted.

It then took the stagehands a little more than 30 minutes to clear the stage to reveal 52, yes, 52 Marshall heads sitting on top of 18 monstrous Marshall 4×12 guitar cabinets!!! I knew it was going to be loud. While not all the amp heads and cabinets were actually spewing high decibel guitar venom, the cabinet rig did take up about 85% of the stage, and it sure looked impressive! While Yngwie has toured and recorded with some great front men such as Graham Bonnet, Jeff Scott Soto, Marc Boals, Joe Lynn Turner, and most recently, Tim ‘Ripper’ Owens, there have been no lead vocalists on the last few tours. The singing duties were handled by Yngwie himself and keyboardist Nick Marino. Nick and drummer Brian Wilson also play in a local band known as NZM. South Florida native Emilio Martinez handled the bass and background vocals. 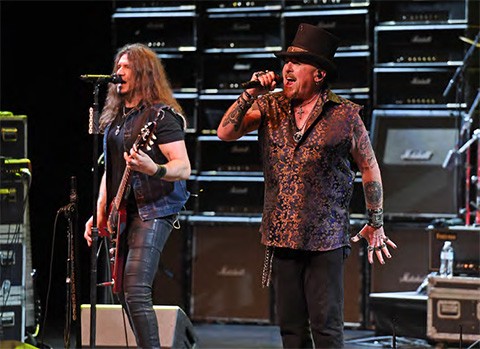 A few minutes before 9PM, the lights went down, fog engulfed the stage and Yngwie belted out a few blazing scales and wild arpeggios, preparing us for the musical onslaught that was about to come. The band appeared on stage and went full force into the opening song, ‘Rising Force’. Yngwie just took complete command as his stage presence made me forget about everything else. His showmanship skills rival his musical mastery as he tosses the guitar around his neck with ease and flips out pick after pick while not missing a beat with his scorching runs. He normally switches guitars in between songs as his aggressive play knocks them out of tune. I really felt sympathetic to his guitar tech, who was continually running around adjusting and bringing him guitars. Each time while Yngwie waited for his tech to bring another guitar, he would adjust the large amount of jewelry around his wrists and/or bend over and fluff his hair. It seems to me like the jewelry would get in his way, but all the primping added a comical element. While the rest of us are wondering how he can play so well and effortlessly, he seems to be expending more energy in getting his appearance in order! Yngwie treated us to his version of the ‘Star Spangled Banner’ bringing the crowd to its feet.

After more than 20 neo-classically derived songs had blasted us, they closed the show with his popular song ‘You Don’t Remember, I’ll Never Forget’, Yngwie thanked the crowd, and the band went off stage about ten minutes past 10PM. After a few minutes of us chanting for him to come back, a nylon string acoustic guitar was placed at center stage on a Gracie stand, and Yngwie came out to rip an acoustic solo intro that had hints of his ‘Icarus Dream Suite’, then stepped back and took the Strat hanging off his back to start one of his most popular instrumentals, ‘Blackstar’. It’s the first song on his first solo release from 1984. It’s a dark ballad that demonstrates his picking dexterity, harmony and bursts of speed. It really shows the depth of his musicianship. I have heard from jealous guitar players for decades that his fret board speed lacked feel, I just tell those same people to listen to ‘Blackstar’ and that should shut them up! The band took their final bow and left the stage.

South Florida has had some major musical talent pass through this area over the years, especially during the ‘70’s, such as Eric Clapton and The Eagles, as well as jazz Greats Joe Diorio, Jaco Pastorious, Steve Morse and Pat Matheny. We are fortunate that one of the most influential rock guitarists of all time has been living amongst us in Miami Shores for the last 30 years!