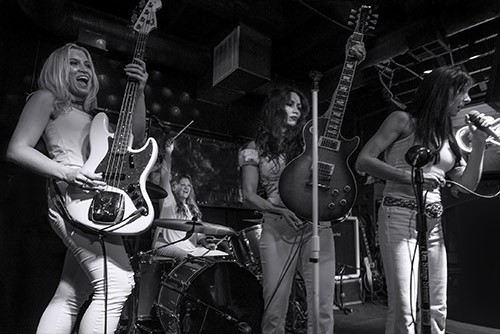 A Conversation with Clementine, the Mighty Drummer of Zepparella

For their first ever Florida appearance, Zepparella will be packing them into the Venice Performing Arts Center near Sarasota on Friday, February 21st. For 15 years, the all-female tribute act has been honing their craft, and their live shows are extraordinary. It is not so easy to reinvent classic tunes or to add new flare with improvisation. Yet, Zepparella successfully recreates the familiar sounds and vibes of Led Zeppelin, without changing a word.

SFL Music: Clementine, thank you for taking the time to chat with SFL Music. Where are you right now?

Clementine: Zepparella played in Seattle last night. It is an annual event we’ve been doing for years. We play two shows in one night at Tractor Tavern. It was awesome. Both shows were sold out and we had an absolute blast.

SFL Music: I recently saw Zepparella perform at The Roxy Theatre on the Sunset Strip in West Hollywood, California. Isn’t Zepparella from California?

Clementine: Yup. We are from the (San Francisco) Bay Area.

SFL Music: Clementine, can you please give me a 2-minute history of Zepparella?

Clementine: Sure. The band started 15 years ago. I was carrying around the idea for a couple years and was running it by some people. Nobody was interested in pursuing it. But when I mentioned it to (guitarist) Gretchen Menn, she was immediately onboard. There was a singer, Anna Kristina, who was with us for 5 years. She left for seven, but she’s been back for a couple years, which is wonderful. Anna is an amazing vocalist and harmonica player. Holly West is the third bass player that we’ve had and she’s been with us for a couple years. Holly is from Dallas.

SFL Music: I confessed my love to Holly in Hollywood. True story.

Clementine: Yeah, everybody loves Holly. In fact, people were chanting her name at the first show we ever played with her.

SFL Music: Does Zepparella consider The Roxy to be home?

Clementine: Oh yeah. Playing there is always a blast. There’s so much history there. And I love the small rock clubs. Not that The Roxy is particularly small, but we’ve played in theatres and giant festivals. I will always be partial to the Roxy-sized rock club. You are right up in it and you can’t beat it.

SFL Music: Didn’t you play arenas when you opened for Weezer and Kiss?

Clementine: Yes, but those were festivals. It is always awesome to play to big crowds, but a hot and sweaty rock club is ideal for me. (Laughs). Don’t get me wrong, I enjoy playing in front of huge crowds. But there’s something about having people pressed up against the stage. I will always love that.

SFL Music: What does Zepparella offer Led Heads that’s unlike any other cover band?

Clementine: Every band has its own take on the music. What Zepparella offers is the special connection that the four of us have onstage. Since the band first got started, I always wanted it to feel like a real band of skilled musicians, rather than a group of strangers that were just hired to play together. So that’s what we try to do within the structure of somebody else’s music.

SFL Music: I once read you bring a Motown influence to Zeppelin. Can you give me an example?

Clementine: Well that’s all about the drumming. John Bonham was influenced heavily by Gene Krupa of the Big Band (pioneers of orchestral jazz and flamboyant drums). Personally, I have always heard the Motown influence. That was actually the question I asked Robert Plant when I met him, ‘Was Bonham listening to a lot of that stuff?’ He said, ‘Of course. It was the music of the time.’ I hear that in his swings and in his grooves. When I started playing drums, the first songs that I learned were old Motown hard-hitting funk.

Clementine: Yup. Our singer had known him. So when Plant played a show in Berkeley, California, we got to hang out and talk with him for a minute. The first he said was ‘Here’s the drummer. Let me tell you some John stories.’ He was very gracious.

Clementine: He has never had an inelegant moment. (Laughs).

SFL Music: Is Zeppelin II your most prized album, like it is for me?

Clementine: Actually, I am partial to (Led Zeppelin) I.

SFL Music: I know Zepparella mixes up its set-list, so you’re not just playing “Stairway” and other Top 40 hits every night. Do you have some old-school favorites, like “How Many More Times” or “Bring It on Home?”

Clementine: Actually, we just introduced some new stuff this weekend. One of them was “Sick Again” (off 1975’s Physical Graffiti). That song is all about (underage groupies in) L.A. It’s a quirky and weird song. What I love about it is that the verses are broken into two parts. The first is laid-back and sexy. Then it goes manic. It feels like a night out. You go into it feeling cool, but eventually the chaos comes out.

SFL Music: What is the Zepparella Learning Channel on YouTube?

Clementine: That was Gretchen’s idea. The idea is that we do two music videos and then we teach those songs. We had been playing this stuff for 15 years, and we learned plenty about performing it live. That’s why we decided it would be a very cool way to give back to all our devoted fans. Making the videos has also made us step up our games as individual musicians. First of all, we get to hear how others approach the songs we’ve been playing. We get to learn a lot about their mindsets. In order to teach something, we have to get in with an exacto knife to figure out why I am playing any one section so much differently than he did. It’s really tightening all the screws. It’s been a wonderful learning experience for each of us.

SFL Music: Where do you see Zepparella in another 15 years?

Clementine: I want to play the songs that I haven’t been able to do yet. (Laughs). I want to play every Led Zeppelin song, which I cannot do yet. I don’t look too far ahead. Things are going awesome. We have a great fan base, and the crowds keep getting bigger and bigger over time. Also, I would love to get over to Europe, so hopefully we will make that happen.

SFL Music: It may not be Madison Square Garden or the 02 Arena, but at least South Floridians will be fortunate enough to get Zepparella on the West Coast.

Clementine: I only wish that we had more shows scheduled in Florida. That would be ideal. At least we will see you soon. I can’t wait to rock.