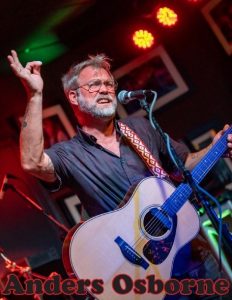 Anders Osborne and Albert Castiglia have a few things in com­mon. They are both singer-songwriters with ever growing fans. The two are also highly regarded guitar slingers that can shred with the best of them. And they’re always ready for a jam.

High­lights of their shows in any given city include surprise guests joining the men onstage, giving the loyal fans a night to remem­ber for years to come.

Back in the Eighties and Nineties, MTV pioneered Unplugged to give fans a different look at their favorite artists. Of course the instruments were still amplified, but they were mostly acoustic guitars with stripped down arrangements that brought renewed attention to famous songs. Most notably, Eric Clapton’s re­vamped “Layla” and Nirvana were brought to our living rooms for intimate experiences.

With this in mind, Albert Poliak’s The Funky Biscuit occasion­ally asks artists to come in and do an acoustic or “unplugged” show to give fans a different look at highly regarded guitar sling­ers. On this night, Anders Osborne got the opportunity, and Al­bert Castiglia got the call to open the show. 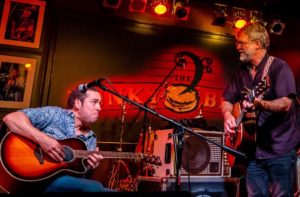 Castiglia is one of South Florida’s most well-known blues rock­ers usually has his amplifier set to 10 and his guitar on fire as the band cranks. Stripped down to just the man and an acous­tic guitar made for an intimate experience. Always the jokester bantering with the audience, Albert took the opportunity to dis­cuss the family at the center of his latest CD release, Master­piece, on Gulf Coast records. Introducing the title song, Casti­glia opened up about his daughter who recently reentered his life after many years of not knowing about her. The story had the audience melting as he sang the chorus, “She’s My Mas­terpiece.”

Osborne, a Swedish transplant who’s been calling New Orleans home since 1985, has become an ambassador for the city and the music it is known for. At the top of his game, Osborne is a prolific songwriter, penning deep and soulful stories that show­case his impressive guitar work. He has also appeared on al­bums by Tab Benoit, Galactic, Mike Zito, Johnny Sansone, and Billy Iuso, adding a bit of guitar sizzle as well as his pen.

Also stripping it down to just a man and an acoustic, Osborne was in his element. You could see he’s done this a time or two. The man addressed the audience with a warm smile and an acquired New Orleans accent, as fans hung on his every word. His set included introductory stories for each song, in­cluding “Away Way Too Long,” “47,” “Wind,” “Fields of Honey,” “Windows,” “Born To Die Together,” “I Know Where I’m Go­ing,” “Standing with Angels,” “Back On Dumaine,” “Nothing Changes,” “Through & Through,” “Send Me A Friend,” “Kings And Peasants,” “I’ve Got a Woman,” “Jealous Love,” “Flat Earth Song,” and “Summertime in New Orleans.” The audience heard songs about love, social injustice, loss, and of course, the Big Easy.

A warm and engaging man, Anders charmed the audience with his easygoing manner, while showcasing the magic of his song­ writing in this intimate setting. The unselfish artist asked Albert to accompany him early in his set. Not only was Castiglia surprised and appreciative, the two men con­nected onstage as if they have been doing so for years. The joy was infectious, and it swept through the audi­ence.

As the artists bantered with one another, as well as with the audience, it seemed as if we were in their living room at a family gathering. Constantly moving his capo, Albert watched intently to get the key of the song to join in and provide his take. Castiglia claimed he didn’t get along with capos, and Anders replied, “He doesn’t need no stinkin’ capo. I think he’s doing just fine. Some people ask me why you cheating like that? I say because I’m not that good. Only people who are not quite that good cheat. That’s why I use the capo. I’m strong enough to say self-deprecating things.”

The boys then launched into “Nothing Changes,” a new song that showcased Osborne’s extraordinary mastery of his acoustic instrument, a highlight of the evening. Closing out with the crowd favorite “Summertime in New Orleans,” both men smiled, as cheers erupted from the room full of spectators on their feet. It was a truly memo­rable evening for all. Kudos to The Funky Biscuit for put­ting these two artists together, displaying their sensitive sides to South Florida concertgoers. -Jay Skolnick