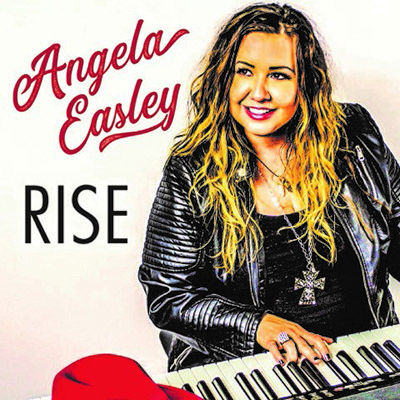 At the age of thirteen, in her home state of Mississippi, Angela Easley most likely had no clue that winning that local talent contest she entered would ultimately lead to her relocating to Nashville. Since the prize was an opportunity to perform on the Grand Ole Opry stage and a recording session in Nashville, it was an apparent sign of things to come. A year later she was brought back to Nashville to record an all-original album titled Country Angel, and there wasn’t much looking back from there. Fast forward a few years and in addition to now being a regular fixture at Bourbon Street Blues And Boogie – one of the city’s premier clubs, she’s also just released Rise – her fourth collaboration with Nashville music producer Walter Scott.

Rise is an EP containing six original songs by singer, pianist and songwriter Angela Easley. For the project, Angela is joined by: producer Walter Scott on B3 Organ; Calvin Johnson on bass; Brian Czach and Marcus Finnie on drums; Randy Peterson on guitar; Billy Contreras on violin; Matthew Gros and Micah Holman on saxophone; Garen Webb and Roy Agee on trombone; Kiran Gupta and Jim Williamson on trumpet; Shelly Fairchild and Heidi Burson on background vocals; and the heavenly voices of the legendary Nashville Gospel quartet of Beverly, Deborah, Regina and Alfreda McCrary – a.k.a. The McCrary Sisters – on background vocals.

I’ve said it time and time again, there is nothing like a slow blues ballad being belted out by a powerhouse female vocalist. “I Can Let Go” is that ballad and Angela Easley is that vocalist. Not being familiar with any of her prior work, it took me all of the songs opening verse to say to myself ‘Wow! This woman can sing.” On top of that, contradicting the idea that you can’t improve on perfection, the heavenly voices of the McCrary Sisters giving the song a hymnal effect, did just that. Additionally, with Angela’s peaceful piano opening; Randy’s stinging guitar leads; the precision rhythm groove Walter, Calvin and Brian – on the organ, bass and drums – are locked in; and the heated horn highlights of Matthew, Garen and Kiran; there’s as much going on musically as there is vocally. Great opening number.

Taking us straight from the church to the cabaret is this dance floor filling smoker titled “Runnin’ Out Of Time”. Not for the weak of heart, this one is fast, furious and funky. It’s indeed a three alarmer with the first being the fiery rhythm – this time led by Marcus on the drums; the second being the burning horns – featuring Roy and Jim on the trombone and trumpet; and the third being the flaming vocals – with backup from Shelly and Heidi. Hoping that someone she has her eye on would hurry up and make his move because she’s running out of time, Angela’s got the whole band in a feverish rush.

No pun intended, Rise addresses the rise of social injustices so rampant in this country. Angela’s use of the word is aimed at inspiring an uprising against it in hopes that we will rise for equality, rise for unification and rise for justice. The powerful message is accompanied by equally powerful music

Other than a couple of short, melancholic sax riffs from Matthew, the first minute-and-a-half of “One More Last Time” is just Angela softly playing her piano and strongly singing her heart out. Then Calvin and Brian come in with a deep rhythm vibe, Randy adds some scorching guitar licks followed by more sullen sax, and just like that another slow blues ballad is giving me goose bumps. Being right in my wheelhouse, this is easily my personal favorite.

Other tracks on this excellent effort by Angela Easley and her talented bunch of musical accomplices include: “Don’t Let The Devil Down” and “Crazy Rain”.

To find out more about Angela Easley, just go to her website – www.angelaeasley.Pete “Blewzzman” Lauro