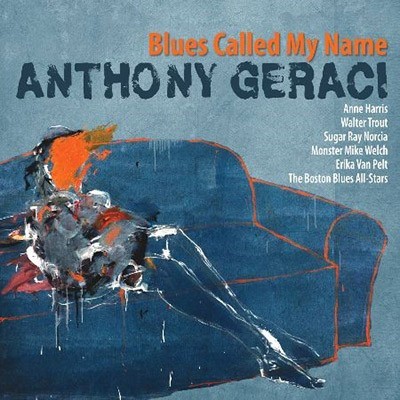 The latest release from Anthony Geraci is titled Blues Called My Name and from what I’m hearing, it should easily raise the number of times Anthony’s been nominated for a Blues Music Award from fifteen to sixteen or more, and it could very well add one or more trophies to the one he’s already got.

Surrounding himself with a supporting cast of monsters of the genre, Anthony Geraci – on piano, Hammond organ and vocals – is joined by: Sugar Ray Norcia on vocals; Charlie O’Neal, Monster Mike Welch, Walter Trout and Barrett Anderson on guitar; Paul Loranger and Chris Rathbun on acoustic bass; Jeff Armstrong on drums and percussion; Erika Van Pelt on vocals; John Vanderpool on tenor sax; and Anne Harris on violin. Blues Called My Name contains ten of Anthony’s self-produced originals of which five are instrumentals.

The disc opens with a smoker about a vehicle that will ultimately carry Anthony home – “That Old Pine Box”. Let’s all hope whenever it does pull into his driveway the model of that vehicle is a 2044 or later. That said, whenever it does arrive Anthony appears to be prepared, according to him it will be driven by angels ’cause he’s already on a stairway to heaven.

The title track, “The Blues Called My Name” has song of the year written all over it. It’s old school, slow blues at its absolute finest, being done by some of the genres finest. Knowing his tenure and how many greats he’s played with over the decades, right now, Anthony is at the top of his game on the keyboards. Vocally, there aren’t many that can touch Sugar Ray on these types of songs and surely the same could be rightfully said for Monster Mike on guitar. It’s no wonder why when they all played together, the Bluetones were a constant force to be reckoned with.

The first of the discs five instrumentals is titled “About Last Night”. Since there are no lyrics, I’m not exactly sure what last night was about, but it’s Latin Jazz vibe has me thinking some cha-cha, rumba and/or salsa dancing was involved. It features brilliant Hammond organ work by Anthony; dazzling guitar leads by Charlie; lively rhythm led by the outstanding percussion work of Jeff. Definitely different from anything I’ve heard Anthony do but nonetheless, very interesting and very well done.

Some of the most notable intersections I’ve stood at were Haight & Ashbury in San Francisco; Thirty-Third & Third in Manhattan; Hollywood & Vine in Los Angeles and, of course, Highway 49 & 61 in Clarksdale. On the other hand, one that I hope I never find myself at is the “Corner of Heartache & Pain”. Lyrically it describes a place I never want to be a part of yet musically, it’s something I always enjoy: a slow bluesy ballad being sung by a female vocalist with a strong and sultry voice – enter Erika Van Pelt; slow, and in this case, organ led rhythm; extended piano leads with most of it being at the high end of the keyboard; and scorching blues guitar licks.

If you’re wondering what might make Anthony say, “I Go O Oh” (actually, it’s o oooh o ooooh ooooo), among other things, one is making love in the afternoon until it’s time to go. Being the only track on which he sings, Anthony does quite an admirable job. With Anthony flailing away at the keys; John wailing away on the sax; and Paul and Jeff at disc’s best on its most profound rhythm; this is by far the hottest track musically.

I know this is his album and not hers, but Anthony added Anne Harris to the ensemble for a reason and since it’s her only appearance, I can’t help but focus on her. With Anthony, Paul and Jeff putting out such an exotic danceable rhythm – which is actually highlighted by Anne’s own violin playing – I just can’t get the picture of her rubber band like body making those attention commanding gyrations. Anyone who has seen her knows exactly what I’m talking about.

Many years ago, while walking down a street that was off the beaten path in the French Quarter of New Orleans, I was drawn into a joint by the sound of a piano that could be heard from the street. It was midday and the dozen or so of us that were in the place were treated to a most memorable and magnificent performance by none other than the late, great Al Broussard. “Song For The Planet”, the disc’s closing track featuring just Anthony and a piano, very much reminded me of that day.

Other tracks on Blues Called My Name include two more instrumentals: “Boston Stomp” and “Into The Night” which, because of Walter Trout, features some of the disc’s best blues guitar leads; and “I Ain’t Gonna Ask”, again featuring Sugar Ray on the vocals.

To find out more about Anthony Geraci and his newest release, Blues Called My Name, just go to – www.anthonygeraciblue.com – Peter “Blewzzman” Lauro