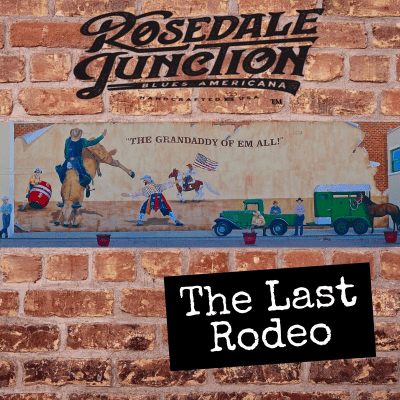 This being the sophomore release for Rosedale Junction makes it apparent that it’s not their first rodeo – as the expression goes – and although it’s titled The Last Rodeo, you can trust me when I say this will not be the band’s last rodeo in that sense of the term. This band is just too damn good for that to happen.

Just as their first fantastic release, Stompin’ On The Front Porch, contained mostly original music; used many outstanding vocalists; and incorporated a lot of instrumentation by about a dozen masterful musicians; The Last Rodeo does all of that as well…..and I do mean as well! Joining bandleader and songwriter Toby Soriero on guitar, bass, vibra slap, mandolin, rainstick, cajon and background vocals are: Dgiovahni Denize, Sam Tuten and Rachel Gavaletz on lead vocals; Kristin Lawler on lead and background vocals; Tyra Juliet on background vocals; Roger Smith on organ, piano and Wurlitzer; Jim Riley on drums; Mark Morgan on horn arrangements; Andy Ellison on pedal steel guitar; Vito Gutilla on violin; Steve Stizzo on accordion; and Matt Soriero on alto sax. Sounding good already, right?

If it was ever possible to look up the definition of a word and have the meaning be given with music, this song would be the meaning of intensity. It’s titled “Dancing Devils” and it’s an eerie tale – lyrically, vocally and musically – about a bout between dancing demons downstairs and guardian angels upstairs. Who the victor is might just be up to interpretation. Calling the rhythm profound; saying the guitar was wailing; and referring to the lead and background vocals of Dgiovahni and Tyra as powerful; would be like calling a hurricane a breeze. Think back to my musical definition and you’ll get it.

According to Toby, besides hearing Susan Tedeschi do it at a live show, he doesn’t recall having come across a studio version of this next song as being widely distributed by a female vocalist. Not being able to verify that, I will go out on a limb by saying Kristin Lawler’s rendition of “Loan Me A Dime” (Fenton Robinson) – the disc’s only cover – could very well be the best ever done by a woman. With the musical intro featuring slow but thunderous rhythm and bone chilling blues guitar licks running two plus minutes, I was already in slow blues heaven. Then, by my standards and taste, the only thing that makes a song like this better happened – a female with a powerful, soulful and emotional voice started belting the hell out of the blues. Add in a minute long, mind blowing organ lead from Roger, a few more gut wrenching guitar leads by Toby, scorching trumpet and trombone support from Mark, and I can truthfully tell you I just heard the best eleven plus minutes of blues I’ll hear for a while.

Because of the opening lines, when I played this song for the Blewzzlady to hear, we both agreed that hearing Sam beautifully sing the lyrics “Dreams began that night in June, 1983……….” and others that describe the start of a happy friendship or relationship, “Rhythm In The Sky” reminded us of us. Having been married on June 26th of 1983, we were able to relate. On the other hand, while we’re still at it thirty nine years, just thirty nine short months later this story came to an end when Toby lost his dear friend in an automobile accident. Although the song goes from a feeling of happiness to one of sadness, the way he remembers his friend and the tribute he pays him, help make it stay a beautiful song. Helping that along were soothing violin and pedal steel guitar highlights by Vito and Andy.

The melancholic lyrics being presented here are coming from a prisoner who has no problem admitting his guilt and yet, with the absolute remorse he exudes while doing so, it’s hard to not feel sorry for him. The credit for that goes to a stunningly emotional and heartfelt vocal performance by Sam Tuten on a track titled “Goin’ Down To Walpole” – what was once a maximum security prison in Massachusetts. Honestly, it’s hard to tell which was more powerful here – the story being told or it’s musical accompaniment. This one had such a grip on me that at seven-and-a-half minutes long I listened to it for close to an hour.

So just two songs back I said “I just heard the best eleven plus minutes of blues I’ll hear for a while”, and as I now listen to the title track – “The Last Rodeo” – that turned into a very short while. Other than changing the name of the woman belting the hell out of the slow, heartfelt and melancholic vocals to Rachel Gavaletz, and adding a moody sax lead by Toby’s son Matt, not a thing has changed. With this one being just under eleven minutes I’ll now say that between two of this disc’s songs, I heard twenty-two minutes of the best blues I’ll hear in a while.

Other tracks on what I’m calling a must have album include: “The Legend Of Dog Cat Elliot”; “Hard Road Blues”; “Little Long Haired Angel”; and an acoustic version of “Rhythm In The Sky”.

If I were still giving out the “Blewzzy Award” (an award I used to give to my favorite of all the disc’s I reviewed all year), this would be the one to beat. I honestly can’t say enough about how freakin’ good The Last Rodeo is. Additionally, with the sound being of concert quality, I gotta give a shout out to Alex Allinson, the disc’s engineer.

To find out more about Rosedale Junction just go to the bands website – www.rosedalejunction.com