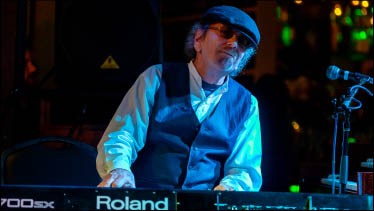 Barry Goldberg, who packed ‘em into The Funky Biscuit on Saturday December 28, has been around the block. For decades, the man has been known around the industry as a top-notch blues and rock keyboardist, as well as a songwriter and record producer. As a teenager in Chicago, Goldberg sat in with Muddy Waters, Otis Rush, and Howlin’ Wolf. He also formed The Electric Flag with Mike Bloomfield in 1967. Goldberg even played keys for Bob Dylan at the historic Newport Folk Festival in 1965, when he first went electric. Coincidentally, I went to Barry’s home in the mountains of Los Angeles in early July, the same weekend that I experienced Zepparella on Sunset Blvd. It was also the day after a sizeable earthquake rocked Southern California.

SFL Music: Barry, where were you when the earthquake hit yesterday?

Keyboardist Barry Goldberg: I was on the road driving and I thought there was something wrong with my transmission. I will never get used to earthquakes, even if they are a force a nature.

SFL Music: In South Florida, we deal with hurricanes.

Barry: There was a hurricane warning the last time I was in Florida, a little over 3 years ago. We were playing at The Cheeca Lodge (and Spa) in Islamorada. It was like paradise. My love for South Florida is undeniable. I played there with The Rides, my band with Stephen Stills and Kenny Wayne Shepherd. That must’ve been 2 years ago. The best of me comes out when I am there.

Barry: I went to the Newport Folk Festival to play with the Paul Butterfield Blues Band. But their producer decided he didn’t want a keyboard player, and no one knew if Dylan’s keyboard player was going to show. So guitarist Mike Bloomfield, who recorded “Like a Rolling Stone” with Dylan just a few months earlier, introduced me to him. That’s how I ended up playing the Newport Folk Festival.

It is very controversial because it was mostly a folk crowd. They were hardcore folkies and they felt very betrayed. The audience was very turned off at how loud it was. Al Kooper showed up, so there were actually two keyboard players. What we did at that show was actually the beginning of folk rock. Some people really dug it, but a lot of people were very turned off. There were some cheers, but there were even more boos. I felt bad.
At the time, I didn’t know much about the folk scene. I was a rock and roll blues guy. I went from Chicago to Newport, and pretty soon all the white college kids were turned onto the blues. That night, we expanded Dylan’s audience to Muddy, Howlin’ Wolf and B.B. King.

SFL Music: What about you? Did you appreciate the folk rock sound?

Barry: Oh, yeah. I felt like we were on a mission. I knew it was important right then and there. Of course, I had no idea just how important it would be. But I was very lucky just to be onstage playing that night. I went from playing with nobody and having to hitchhike home to being onstage with Bob Dylan. That was a highpoint of my career. There were some people in the audience that night that were really digging it. They got it. Others, like Joan Baez, felt betrayed by Bob.

SFL Music: Regardless, it ended up working out in the long run. That concert is historic and you’ll always be a part of it.

Barry: Yes, and I can still remember it like it was yesterday. It was a magical time in my life.