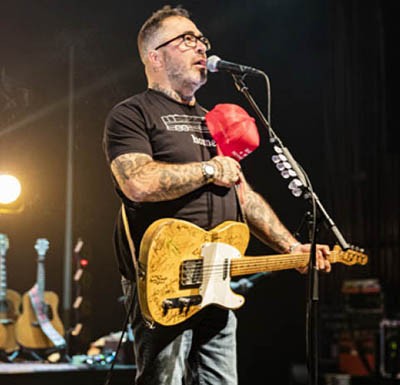 On Thursday, December 12th, The Fillmore Miami Beach hosted Aaron Lewis’ State I’m In Tour.  The theater was buzzing with hints of outlaw country that would even make Waylon Jennings proud.  It was as if I was stepping back in time to when the greats were playing the Grand Ole Opry. Coming from a small Southern town, it was a little taste of home, like fresh lemonade, sweet tea and homemade biscuits.  For others attending, it was a breath of something different, a sneak peek into a world that moves at a slower pace.

This was my first visit to the Fillmore, and it did not disappoint.  The acoustics of the theatre were crisp.  The sound was mixed at a level where the instruments and vocals were clearly distinctive, yet not so strong as to drown out the crowd.

The opening act, Ben Danaher, is from Nashville.  I wasn’t quite sure what to expect because it was only the artist with his guitar.  But he was impressive. I liked every one of his songs: the wording, original and sincere, the guitar perfectly strummed to match the emotions of the stories within the songs.  Danaher’s playlist tells the stories of my life. I felt like we had a lot in common because I identified so closely with all the stories.

If I had to choose my three favorite songs, they would be “Hell or High Water,” “All or Nothing” and “Jesus Can See You.”  “Hell or High Water” is not to be confused with a love ballad, as it is more of a revenge story. “All or Nothing” tells a story about wrestling with internal demons, while battling the bottle.  The song is cleverly crafted to the tune of an upbeat Irish drinking song, which emphasizes the battle. “Jesus Can See You” is about having your heart ripped to the core by someone you love who professes to be a believer.  As he sang the words, “Jesus can see you breaking my heart,” I thought not only about the heartbreak of love, but the heartbreak of family as well. 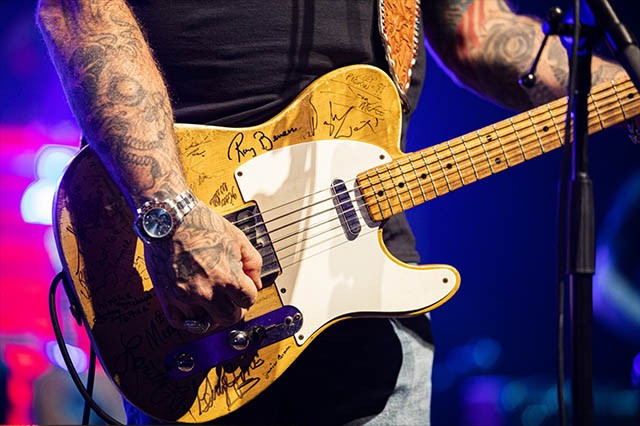 Moving on to Aaron Lewis, he was the reason we were all there.  I’m a little late to the game, only learning about him by accident while surfing YouTube a few years ago.  I stumbled onto a clip of him singing “What Hurts the Most” by Rascal Flatts and I was hooked. His voice pulls emotions from my core and it’s really the only instrument he needs.  Lewis is consistently, unapologetically a patriot. He began this show, the way he begins all of his shows, with the backdrop of an American flag. We all said the Pledge of Allegiance.  He carried the theme of patriotism throughout the entire performance.

My favorites of Aaron’s were “Country Boy,” “Granddaddy’s Gun” and “If I Were the Devil.” “Country Boy” is autobiographical, telling the story of what it’s like to be Aaron Lewis.  The harmonica added depth and transported me back in time. I’m pretty sure that George Jones would be proud.  “Granddaddy’s Gun” is a strong story of legacy and tradition. His granddaddy gave him his gun when he was 13. He still keeps a picture of granddaddy in the case with the gun. One day, he will pass the weapon onto his grandson, along with the stories and tradition.  “If I Were the Devil” is a fun number referencing the current state of affairs.

All in all, it was a great show.  The Fillmore was the perfect setting.  Ben Danaher is someone to watch, while Aaron Lewis is a great addition to the long list of outlaw country greats.  I left the show feeling happy and proud to be an American.