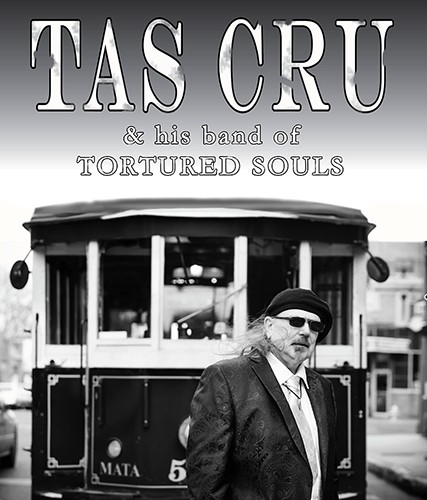 Tas visits the Sunshine State fresh off appearances on Memphis’ historic Beale Street. He and his Band of Tortured Souls take up residence there at the world famous Rum Boogie Cafe as they do every January during the International Blues Challenge For eleven years running, he hosts the premiere jam at the Boogie during the IBC.

Memphis is just one of the fifteen cities on his Drive On Tour that brings Tas and his new album, Drive On to Florida for the first two weeks of February. Tas returns again in March to play dates including Blues at the Ranch and the Bonita Springs Blues Festival.

Drive On is the latest soundtrack of a man who, living the life he chooses just keeps drivin’ on. Drive On is Tas Cru’s second release on Subcat Records (Syracuse, NY). This new album takes Tas’ music down a different road with newcomers Anthony Geraci, (keyboards), Anthony Terry (tenor sax) and Gabe Stillman (slide guitar) along for the ride to the studio. Mixing this fresh blood with Tas’ tried and true studio companions proves the right turn to take at a crossroads that is Drive On.

Tas Cru is currently is based out of upstate New York. He is a Delaney Guitars (Austin TX) endorsed artist and is signed to Subcat Records. He is managed by Vinny Marini of Barrelhouse Talent.