Every so often an album comes along that makes you stop and go…. Damn, that’s really great. Last year Bob Dylan captured that distinction with Rough and Rowdy Ways. For 2021, it is Black Market Tango, by Bloodkin, the southern rocker local legends based in Athens, Georgia. No, they are not a death metal band, as their name is misleading and probably turned off many fans who never got the chance to find out what a special southern rock band they are. They were made for Rock n’ Roll but defy categorization because they are more diverse than just a rock band, and this entire double LP is absolutely addictive. Two close childhood friends, Eric Carter and Daniel Hutchens, from West Virginia, formed Bloodkin and later moved their new band to Athens, Georgia, and with their magical musical connection became entrenched in the Athens Rock scene. They released their first LP, Good Luck Charm, in 1994. Black Market Tango was released April 16, 2021, which was ten years after 2009’s Baby They Told Us We Would Rise Again. Tragically, co-founder and vocalist Daniel Hutchens died suddenly weeks later, on May 9, 2021, of a massive stroke, at only 56 years old. Lifelong friend and Bloodkin co-founder Eric Carter, understandably devastated, recalled their partnership as, “a combination of brothers and an old married couple. Our first priority was our baby, Bloodkin. It was always about the damn song. THAT was our thing and I’ll never find something like that again.” What makes Bloodkin so memorable is their creative and brilliant songs with more hooks than a bait and tackle shop. Their working partnership created a winning formula with Hutchens’ commanding swagger on vocals, natural lyrical genius, and Carter’s swirling raunchy guitar riffs. Chris Robinson of The Black Crowes had once asked Carter to join them and he turned them down, loyal to his friend, Hutchens. The addition of the perfect blend of slide guitar work and dobro by the extraordinary John Neff sealed the deal, making them rockers with a southern country sound. Sweet Home Athens… think Tom Petty meets Lynyrd Skynyrd, some Alt- Country melancholy of Lucero thrown in, and a touch of the blues. Most importantly, the songs are jewels. Every single song on this double LP is a winner and it was well worth the long ten year wait. 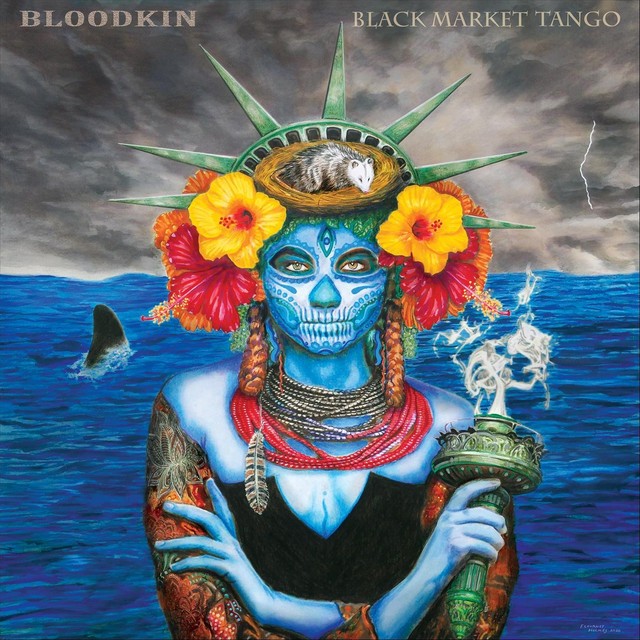 Bloodkin has so many varied influences, from The Rolling Stones, The Replacements, Bob Dylan, The Allman Brothers, and Led Zeppelin, but they manage to channel that into a swampier country fried rock version of sounding like themselves. The album starts with the blasting punky rocker, “Transistor Radio,” which is quite upbeat and very infectious. Like Joe Jackson’s “I’m The Man,” it makes even a non-dancer want to dance. Abruptly changing gears, the melancholy, reminiscent of Alt- Country’s Son Volt, comes through on “John Coltrane in Nagasaki.” It is based on a true story about when John Coltrane went to Nagasaki in the hopes of “retuning the molecules” in the air to heal their city, after the nuclear bomb was dropped on them. Hutchens had seen a documentary on John Coltrane explaining his trip to Nagasaki and was moved by it. It was the first single released on their latest album and is a song you’ll find yourself singing in the shower. Slowing down the pace and losing none of the impact, “Trashy” has the addictive melodic chorus, “We’re trashy, but we’re true.” The Dylanesque “Her Blues” is sung by Eric Carter and is the best Dylan song (this year) that Dylan didn’t write. Carter laments, “My lovin’ cup is broken and cracked. Those things you gave me, now I’m giving them back. I won’t be there for you when you fall. How many times will I get burned?” Carter also sings vocals on “Speed Freak Highway,” once again echoing Tom Petty, but making it their own and sounding amazing. “Gloryosky” is another full-fledged rocker, picking up the tempo with Carter’s superb and magical guitar work. “Beneath the Streets of Nashville” shifts back down with chord changes that would make Pete Townsend proud. These songs have a story to tell and would make a great movie. “Freedom Fizz” is simplistic and light. With the “Last Concert Café,” the hypnotic and beautiful dobro by John Neff, melody and lyrics all gel together in perfection. It’s a tribute to a lost friend. “Kids are Cool” is a shout out to his kids and another gem of a rocker. The swinging “Man in Trouble,” has a winning chorus of “Just one more drink of that black champagne.” It’s another chorus that will get in your head and you will be singing it long after the song is over. Like Dylan’s gift of vocal delivery, it’s the way Hutchens sings his descriptive lyrics that make it so damn good. He had explained that it was about “when life gets so bad you start thinking that there might be some supernatural cause behind the trouble.” As for “Metal and Wood,” any song that mentions Lou Reed and Lucinda Williams in the same song is alright by me. It repeats the line, “Like Lou Reed said, “I was made for Rock n’ Roll.” Hutchens has, in fact, toured and recorded with Moe Tucker and Sterling Morrison of the Velvet Underground and appeared on stage with Lou Reed as well.

“Cantina Fever” has some cool pedal steel guitar, violin, and more great vocals by Hutchens, leaving us wanting more. “One Way Ride” has heavy and powerful guitars driving the song, a la Led Zeppelin with raw power and seductiveness. This is not a wimpy band and this album is right up there with the quality of Led Zeppelin’s double album Physical Graffiti. It is meant to be played loud, as advised on the album. Their passion for their music also comes clearly through and it becomes evident that this is their labor of love. The album finishes with the epic, almost 12 minutes, “God’s Bar,” with the haunting delivery of the lyrics, “You don’t have to go home… but you can’t stay here.” It is two distinct songs put together and done in one take. A perfect finish to their masterpiece of an album. Hutchens had explained that the song is about “looking for God but aware devils hang out in the same neighborhood.” All produced by David Barbe (Producer of The Drive-By Truckers) and it was actually recorded and mixed in 2019 but not put out until April 2021 on Cosmo Sex School Records.

This beauty of a double album is displayed in a stunning gatefold package that is frameable art. The artwork is done by award winning artist, Flournoy Holmes, who has created so many famous album covers, for The Allman Brothers (Eat a Peach), Kansas, Widespread Panic, Ted Nugent, The Outlaws and so many more. This one is just an amazing eye-catching cover, making it a must to buy the LP version. Themes of Mexico run through the album and there’s a super cool painting of a cantina by Flournoy Holmes on the inside of the album gatefold and also inside the cd package.

Although they have not yet received the degree of recognition that they so deserve, they have already been a huge influence on more successful bands like the Athens, Georgia based Jam band, Widespread Panic, who play four of Bloodkin’s songs in their shows. Patterson Hood of Alt-Country band Drive-by Truckers is also a huge fan, as is Drive-by Trucker’s Mike Cooley who played banjo on “Freedom Fizz.” Hutchens and Carter have collaborated on over 500 songs. In 2013, they released a 5 CD Box set called “One Long Hustle” with 88 previously unreleased gems spanning their career up to that point. Hutchens delivers his clever lyrics with perfection and a wicked sense of humor. Best put in Hutchen’s own words, “In my opinion, it’s the closest to a bullseye that we have come as a whole record all the way through.” Couldn’t agree with him more and it would be a crime for this musical treasure to be overlooked. Sometimes described as the best band you’ve never heard of, as they were not good at self-promotion. Bloodkin had it all and it’s so sad that Hutchens is gone too young and way too soon. Such a shame…I bet they had another 500 songs in them.