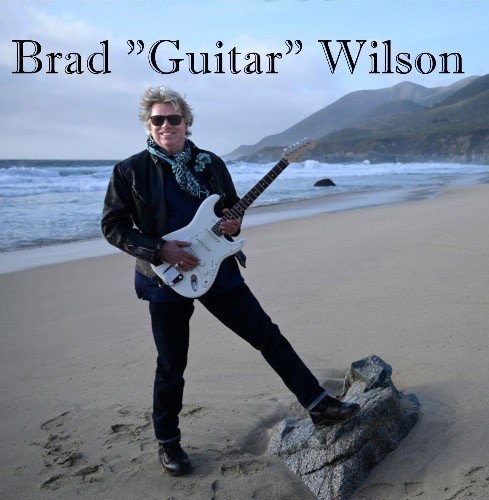 This self-titled, self-produced release is the fourth for Brad “Guitar” Wilson and if it follows in the footsteps of his first three, then this will be his fourth consecutive album charting on worldwide radio. Having already given this one several listens, with a release date of June, 17, 2022, I’m sure it will be just a matter of time before that happens. For this project, Brad Wilson – on guitar and vocals – is joined by: Brian Beal, Jeff Covell, Oscar Huguet and Jack Van Aert on bass; Adam Gust, Peter Wolf, Rod Wilson and Willem Van Kempen on drums; Frankie Vriens on keyboards; and Daniel Guitarra on guitar. With the emphasis on rock blues, the disc’s twelve tracks include six originals and six covers.

Paying homage to one of the all-time blues greats by covering one of their songs is indeed respectable. On the other hand, honoring that person by writing an original song about them and putting their name in the title definitely raises the tribute bar. That’s exactly what Brad did on the opening track titled “Ballad of John Lee”. Now I’m sure there’s no doubt as to whom that might be but if there were any at all, it would be erased exactly two seconds into the track when you’d be expecting that all familiar growl of “how, how, how, how”. Beyond the idea of the song, it’s also a perfect introduction to the band: Brad Wilson, Brian Beal and Adam Gust are indeed capable of boogieing all night long.

Staying in tribute mode, you can’t go wrong with tips of the hat to Muddy, B. B., Stevie, Freddie and Willie. Up next is a tribute to Muddy Waters with a cover of his “Walkin’ Thru The Park.” Right out of the gate Brian (bass) and Adam (drums) are already locked into that perfect rhythm groove and then pow – in comes Frankie with killer organ support. Then there’s Brad who’s not at all sounding like Muddy – and there’s absolutely no need to – this guy, with his own outstanding style, can belt the hell out of the blues both vocally and instrumentally.

On his rendition of B. B. King’s “Rock Me Baby”, Brad took the liberty of adding not just a little but a lot of juice to the guitar leads, and the outcome is a smoker that may even have had B. B. saying “wow!”. Then, on Stevie Ray Vaughn’s “House Is Rockin’ ” the whole band hits fifth gear and all hell breaks out. Warning…..don’t even try to keep up with this one if it comes on while driving.

Brad and the guys kept things traditional on their version of Freddie King’s “Someday After Awhile” and this purist is happy for that. Not just name wise, Freddie was indeed one of the kings of the blues and Brad more than showed him, and the song, lots of respect. Brian, Peter and Frankie are all over the slow blues groove on the bass, drums and organ, and with his emotional vocals and stinging guitar leads, Brads at disc’s best on both. This one had me saying “WOW!”.

That same vibe comes into play on a masterful cover of Willie Dixon’s “I Can’t Quit You”. Slow blues, with a bit of a cutting edge, just doesn’t get much better than this. One of the biggest impressions this band has made on me is that while unquestionably being a rock/blues band, and while being a trio on most of the tracks, they never go so far over the edge into that so called ‘power trio’ arena which more often than not – by my taste – takes the word blues out of the equation. Great job guys.

The disc closes with an original tiled “Drivin'”, and with the addition of a second drummer (Willem Van Kempen) and a second guitarist (Daniel Guitarra), that’s exactly what the band is doing – musically and literally. The song is about what’s going through Brad’s mind while driving to a gig and here’s a sample:

“Drivin’ down the highway, going to the show,
and how it’s gonna be, I really don’t know.
I hope the people like what the band plays,
we come to play the blues for you……there’s nothing I’d rather do.”
Brad, don’t worry about a thing. Take it from me, “you got this!

Other tracks on this totally well done album include four more originals: “You’re The One For Me”; “All Kinds Of Fools”, “Hang With A Bang” and “Avatar”; plus a cover of Eric Clapton’s “Tales Of Brave Ulysses.”

To find out more about Brad “Guitar” Wilson and his newest self titled release just go to – www.bradwilsonlive.com – Peter “Blewzzman” Lauro