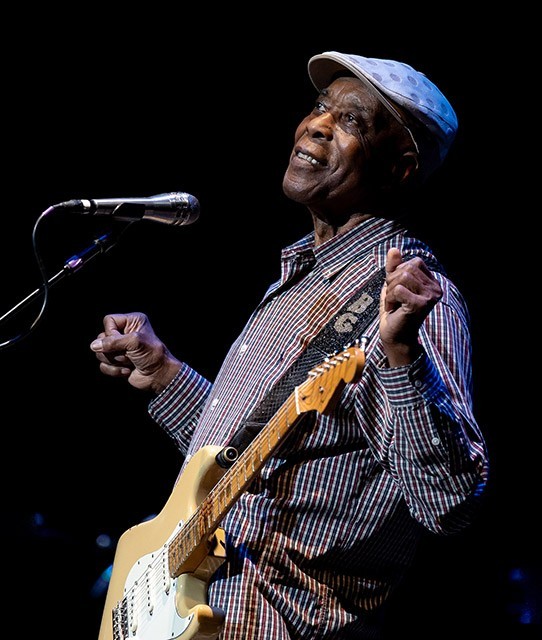 Blues legend and 8-time Grammy Award winner Buddy Guy was in town on October 28 at Ft Lauderdale’s Au-Rene Theater at Broward Center for the Performing Arts. In addition to bringing his famous Chicago blues sound, he brought with him Grammy nominated Louisiana bluesman Kenny Wayne Shepherd for an unforgettable evening in South Florida. The seven-piece Kenny Wayne Shepherd Band kicked off at 8pm prompt with “Woman Like You” and made their way into “True Lies.” Shepherd began his transition of switching Stratocasters every other song. By the end of the night, he switched guitars seven times. They played a tight set that included piano, tenor sax and trumpet solos, and drew plenty of applause from the nearly sold out crowd. Shepherd was definitely the star, tearing up some tasty solos, showing the crowd that the blues isn’t going away anytime soon. Vocalist Noah Hunt took turns singing and playing rhythm guitar, while Shepard sang throughout the evening. For the encore, they performed their biggest hit, “Blue on Black,” followed by a rousing rendition of the Hendrix classic “Voodoo Child.”

After a 30-minute set change, the Damn Right Blues Band warmed up the stage for the man we were all there to see, Rock & Roll Hall of Fame member Buddy Guy. Even though he is now 85 years old, Buddy is still a complete showman; leading the ensemble, in control of his instrument, chatting and joking with the audience. He asked for the house lights to be turned on so he could see his audience. Guy’s stage presence was nothing short of amazing. The boys opened with “Damn Right I Got the Blues.” Following the number, the man greeted us with “If you don’t like the Blues, you’re in the wrong f-cking place.” He then noodled on his guitar, adjusted a tuning peg, and broke a string. It all seemed like part of the act, as his 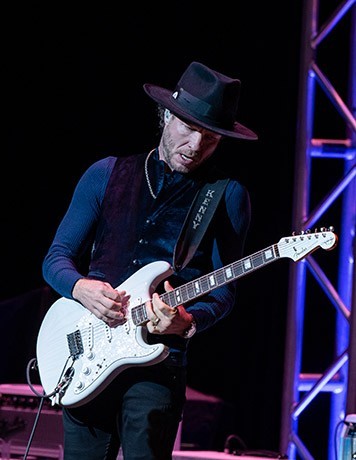 trademark polka dot Stratocaster was brought out to him. A lucky fan in the front row was even handed the broken string. The crew started Eddie Boyd’s classic “Five Long Years.” They launched into a medley of blues tunes, including “Cheaper to Keep Her,” “I Just Want to Make Love to You,” “Purple Haze,” and ‘Hoochie Coochie Man. During the medley, the showman found some creative ways to make his guitar talk, from bending the strings and rubbing his sleeve on them to flipping his instrument over and running the strings along his chest.

Guy talked about the influence Muddy Waters and John Lee Hooker had on him. He also mentioned how much he appreciated the Rolling Stones citing him as one of their influences. It was after famous British groups, like the Stones and Cream, mentioned his importance that Buddy started gaining popularity. One of the traits that made Buddy standout was his flashy demeanor. He was one of the first blues guitarists to stand up while playing. He would take that several steps further by playing on top of bars, walking through the crowd. Guy demonstrated some of that showmanship by placing his guitar on a nearby speaker cabinet, taking out a drumstick, and using the guitar as his personal set. While using the stick as a slide, he tapped a few bars of Cream’s “Sunshine of Your Love.” He joked about alcohol killing germs, and that he drank so much that he was unafraid of Covid. The talent rounded out the set with the melodic “Skin Deep,” “Slipping Out, Slipping In” and finished off with another medley that entailed Cream’s “Strange Brew,” John Lee Hooker’s “Boom Boom” and Peggy Lee’s “Fever.” They only played for 1 hour and 15 minutes, but it felt much longer. The man and his Damn Right Blues Band put on a spectacular show for South Florida. While there are plenty of young musicians that will keep the blues alive, Buddy Guy will definitely be a hard act to follow.