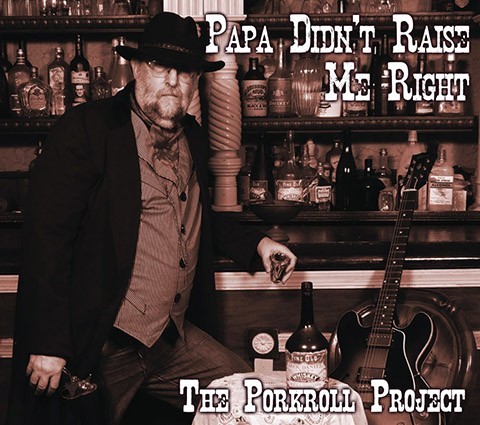 The Porkroll Project has been part of the Mary4Music family for well over fifteen years now. Since 2005, we have reviewed several of the bands releases; in 2012 they had a song on the very first volume of our nine “Mary4Music Presents: Keeping The Blues Alive” compilation CDs; and Neil Taylor, the bands front man and producer has been a constant endorser of ours with his many referrals.

Taking some time off for regrouping, The Porkroll Project are back with their fourth release titled “Papa Didn’t Raise Me Right”. With some old and some new, the members of the band include: Neil Taylor on guitars, banjo, percussion and vocals; Walter Runge on organ, piano and gang vocals; Anthony Pieruccini on bass and gang vocals; John “JT” Thomas on drums and gang vocals; David Renz on sax and horn arrangements; Chris Neal on trumpet; Andrew Whisler on trombone; guest vocalist Paul Matecki; Jesse Taylor on bass; and Buddy Cleveland on harmonica. At nearly an hour long, the recording contains two covers, nine originals and – in true Porkroll Project form – a whole lot of wit.

The disc opens with the title track, “Papa Didn’t Raise Me Right”. It tells a mournful tale of a man lamenting over the abandonment of his father before he was even three. Makes you think his father didn’t raise him at all. With a strong organ presence, the rhythm is as intense and the songs subject matter and the guitar leads are as stinging as some of it’s lyrics.

Because of the quick education I just got, I’d like to thank Neil Taylor for including a cover of Leiber and Stoller’s “Down In Mexico” on this recording. Not realizing that it was the first release by The Coasters, back in 1957, I just had to give the original a listen. Unlike “Yakety Yak”, “Charlie Brown” and other of the bands hits, I was surprised to hear a bit of blues, a bit of funk and a whole lot of percussion from the guys. That said, from every aspect – especially Neil’s scorching guitar runs – The Porkroll Project took the recording and moved it from the “Oldies” section of the record shop into the “Blues” bin.

Trying to get away from a place, and possibly a person who’s driving him crazy, this track finds Neil “Going To The Station”. However, he won’t be buying a ticket, or paying any fare; he won’t be checking any baggage, because he’s not really going anywhere. Sadly, he won’t even be getting on a train, he’ll be getting under one. He’s going down to the station, he’s leaving that place behind, he’s gonna jump down on the railroad tracks and ease his troubled mind. That said, hearing Neil’s frolicking vocal presentation, the rest of the songs lyrics, and it’s uptempo vibe will easily expose its satirical nature. As a matter of fact, with the assertive rhythm Anthony and John are laying down on the bass and drums; the vibrant piano leads being added by Walter; and the ambitious guitar leads Neal’s laying down, the song is a sure dance floor filler.

Being over seven minutes of slow scorching blues, it should surprise absolutely no one when I say that “Crescent Moon” is easily one of the disc’s best. Stepping away from his often jovial romps on cleverly written creations, with a powerful, soulful and heartfelt performance, Neil absolutely nails the vocals on this one. Additionally, with David’s torrid sax leads; Anthony and John comfortably settled into that laid-back rhythm groove; Walter’s bewitching B3 vibe; and Neil’s masterful and mesmerizing guitar licks; it’s a musical masterpiece.

Bringing some of that previously mentioned wit into play, “Better You Than Me” spins a yarn involving a dog, a monkey and a cheetah in a survival of the fittest type situation. Now before you go placing your money on the cheetah, beware of a little reverse psychology and that myth about not being able to teach an old dog new tricks. This just might not be the slam dunk it appears to be.

For similarly creative, humorous and witty Porkroll parodies make sure you give a listen to “Mama Put The Gun Down”, “Dancing With The Angels” (Peter Rowan), “Nothing Yet”, “The Next Thing Smokin” and “A Taste Of Malt Liquor”.

Here’s a tough one – is being “Sentenced To The Blues” a punishment or a reward? If it meant I had to be subjected to listen to stuff like this for any length of time, then bring it on. It’s another blues smoker with plenty of wind fueling its flames. It features composer Buddy Cleveland showcasing some serious blues chops on harp, Andrew blowing a few stinging trumpet leads and David wailing away on sax. BTW, there won’t be any appeals coming from me.

For information on The Porkroll Project go to – www.porkrollproject.com – and should you have not yet received your copy of “Papa Didn’t Raise Me Right” for airplay, please contact Betsie Brown at www.blindraccoon.com. Remember, wherever you go and whoever you contact, please let them know The Blewzzman sent you.