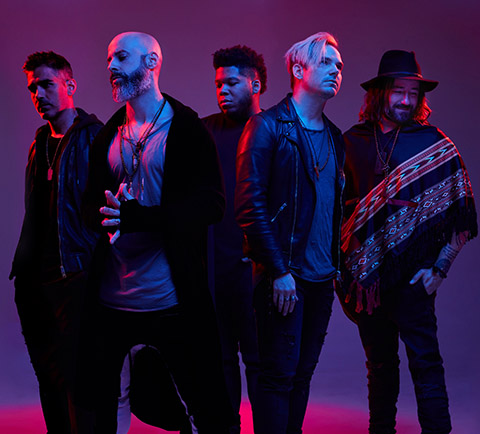 WEST PALM BEACH, FL – MAY 12, 2022 – Daughtry: The Dearly Beloved Tour with special guests Pop Evil are coming to the Raymond F. Kravis Center for the Performing Arts for the first time on Friday, September 16 at 7:30 pm.

Daughtry has sold over 9 million albums and 16 million singles worldwide, as well as selling out concerts across the globe. Their debut album, the self-titled Daughtry, was the top-selling album of 2007, producing 4 Top 20 Platinum-selling singles on the Billboard Hot 100 and became the fastest-selling rock debut album in Soundscan history. It was also nominated for 4 Grammy Awards, won 4 American Music Awards and 7 Billboard Music Awards, including Album of the Year. Fronted by the band’s namesake, Chris Daughtry—a finalist on the fifth season of American Idol—the band is known for Billboard hits like “It’s Not Over”, “Home”, “No Surprise”, and more. Daughtry is currently touring in support of its sixth album, Dearly Beloved, which was released last fall and features the hit “Lioness”.

Special guests Pop Evil has massive anthems and built a new rock’n’roll institution on a foundation of showmanship, raw relatability, and hard rock hooks – both forward-thinking and timeless – from frontman, Leigh Kakaty, lead guitarist Nick Fuelling, rhythm guitarist Dave Grahs, bassist Joey “Chicago” Walser and drummer Hayley Cramer. Pop Evil just celebrated their 7th career #1 single in late 2021 with “Survivor” on Billboard’s Mainstream Rock Chart, marking a historic milestone. “Survivor” joins the previous Top 10 single “Work,” and #1 single “Breathe Again,” from their album VERSATILE, out now via MNRK Heavy. Over the course of their career, the band has achieved four gold singles with “Torn to Pieces,” and “Trenches” from Onyx, “Footsteps” from UP and, “100 in a 55” from their debut studio album, Lipstick on the Mirror. View the music video for their current single, “Eye of the Storm,” here.

Daughtry: The Dearly Beloved Tour with special guests Pop Evil rocks on stage at the Kravis Center Friday, September 16, 2022, at 7:30 pm. Tickets are on sale tomorrow to Kravis Center Members. For information on becoming a member visit www.kravis.org/membership. General public on sale will be Friday, May 20 at 10am through the Official Kravis Center Website www.kravis.org. Tickets will also be available by calling the Box Office at 561.832.7469 Monday through Saturday, Noon – 5 pm. Tickets start at $35. A limited quantity of VIP Packages are available, including meet & greet.

About the Raymond F. Kravis Center for the Performing Arts:
The Kravis Center is a not-for-profit performing arts center located at 701 Okeechobee Blvd. in West Palm Beach, FL. The Center’s mission is to enhance the quality of life in Palm Beach County by presenting a diverse schedule of national and international artists and companies of the highest quality, by offering comprehensive arts education programs—serving nearly 3 million schoolchildren since its inception; by providing a Palm Beach County home for local and regional arts organizations to showcase their work; and by providing an economic catalyst and community leadership in West Palm Beach, supporting efforts to increase travel and tourism to Palm Beach County. For information, please visit kravis.org.