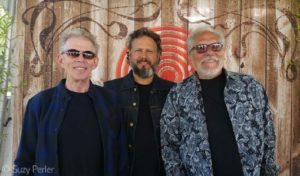 SFL Music is thrilled to have a special contribbution from Blues Radio International’s Jesse Finkelstein. Jesse had the pleasere to speak with Jorma Kaukonen about Hot Tuna’s blues connections as well as their upcoming New Year’s Eve concert at Fort Lauderdale’s Parker Play­house.

Jorma Kaukonen: Well, This is going to be an electric show, which means that it will be Jack Casady, of course myself and Justin Guip, our drummer for the last five or six years, and engineer and co-producer of the last Hot Tuna record. We’ve done so many more electric shows in recent times. And Jack and I have been reenergized by how much fun it is to stand up and play electric music. So this New Year’s Eve celebration, you’ll get to see me and Jack to do a retrospective of music from more or less the present back to Hot Tuna’s beginnings.

SFL Music: Quite a journey. And it all began with you and Jack Casady playing in hotel rooms.

Kaukonen: Yes, of course, that’s where Hot Tuna really began. Although if you think about Jack’s and my relation­ship, you know, he and I played together since we’re both at high school in 1958. What became the first Hot Tuna re­cord then, of course, morphed into more life for Hot Tuna. But it started out with me and Jack in the hotel rooms back then. It’s hard to imagine back when the hotel rooms didn’t have TVs and when guys in bands had to share rooms. Instead of watching stuff on TV we played music.

SFL Music: When you started out, you introduced a whole new generation the works of people like Julius Daniels, Blind Boy fuller, Robert Johnson and Rever­end Gary Davis. Blues obviously plays a big role in the Hot Tuna catalogue.

Kaukonen: When I get asked the question, “What are you the most proud of in your career? In your life?” My answer usually is, after my kids and my family, it’s turning people on to artists such as those you’ve mentioned. So we’ve been part of the conduit for making that happen and it’s been an honor.

SFL Music: Hot Tuna grew in many directions from its earliest days. Looking back now with a perspective of half a century, how would you describe that evolution?

Kaukonen: Well, I think that we’ve especially stayed true to our roots. I’m not fanning myself: the fact is that is just who we are. What I consider to be the journey of intent in music has not changed at all but along the way, Jack and I have managed to learn a lot more about music in general and so, on some levels, we’ve become a little more so­phisticated in our approach. I hope that along the way that we haven’t lost touch with what keeps that music great.

SFL Music: Whenever I watch you and Jack on stage— most recently last month in Pennsylvania, I always see that at some point you turn to each other and a smile begins to slowly appear on your face. When you’re playing with Jack, carrying so much in­credible musical history between the two of you, what goes through your mind?

Kaukonen: I think one of the things that goes through our minds is we are so blessed and so lucky to have the opportu­nity to play this music for other people. And we have opportunity to be still be healthy enough to be able to play at the level that is important to us. I’m not saying we think about that all the time while we are playing, because sometimes we’re just having fun and we’re looking at each other. But if we stop for a moment to have this internal conversation, I guarantee that when we look at each other and the sly smiles come across our faces, the reason is that we’re thinking, “We’re two lucky dogs.”

SFL Music: For anyone wanting the complete Hot Tuna story, I would highly recommend your book, “Been So Long”. It’s not only got a lot of entertaining musical history but also some pretty deep insightful observa­tions on the business of life. What was the writing pro­cess like?

Kaukonen: Well, you know, I’ve been blogging off and on for years, but blogging is not the same thing as writing a book. I’ve never written a book before and to be able just to maintain focus and purpose for a couple of hundred pages was a whole new exercise for me. But I found my­self, interestingly enough, able to be—I believe pretty bru­tally honest. I’m self-conscious in the process and I think that kind of awareness was really liberating for me. It took a little bit of getting into to get there. But once I was there I really totally felt comfortable telling the story.

SFL Music: Do you have any parting thoughts for all the Hot Tuna fans in South Florida who are eagerly looking forward to New Year’s Eve?

Kaukonen: Keep smiling, keep listening to that music and we sure hope to see you down there for our New Year’s Eve electric show.

Kaukonen: Well, Jesse, you know where to find me and you’re always a fun guy to talk to.