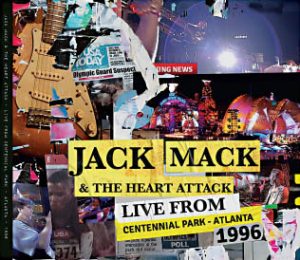 It’s July 1966, and Jack Mack & The Heart Attack are performing at the XXVI Olympiad in Centennial Park, Atlanta. As the band closed their set with one of their original songs – “I Walk Alone” – a pipe bomb that killed one and injured one hundred and eleven exploded in close proximity to the stage, abruptly ending the show.  This is a live recording of that show and the blast would be the first time an act of domestic terrorism ever closed a live recording.  Right around the time most of you will be reading this, Clint Eastwood’s latest film – “Richard Jewel” – will have just been released.  Those of you who recognize that name may remember that Richard was the security guard who was wrongfully accused of setting off that bomb.  The movie will feature that closing song along with the bands cover of The Staple Singers’ “I’ll Take You There”.

Jack Mack & The Heart Attack, known around the world as the “Hardest working band in soul business”, include: Andrew Kastner on guitar and vocals; Bill Bergman on tenor sax and vocals; John Paruolo on Hammond B3 organ and vocals; Lester Lovitt on trumpet and vocals;; Tim Scott on bass and lead vocals; TC Moses on lead vocals; and Alvino Bennett on drums. Additional vocalists used include Mark Campbell and Carlos Murguia. The disc’s five original songs and six covers of some soul classics were just the type of high energy tracks that could keep close to forty thousand party goers on their feet for most of the show.

With the crowd already in a frenzy just from the emcee’s introduction, the band made sure they kept them there with a powerful opening track titled “More Soul” (A. Christian).  Although it was under a two-minute warm up number, the guys had the enthusiastic audience sounding like they had just witnessed a show peaking performance.

Maintaining that momentum, the band goes into an original six-and-a-half minute dance number titled “Breaking Down The Walls” – which probably broke down everyone’s inhibitions as well.  Ya just can’t hear stuff this funky and and not want to boogie.

With outstanding backup support, TC’s soulful vocals lead the way through a five minute plus rendition of the Staple Singers classic, “I’ll Take You There” (A. Bell). Musically, the track is highlighted by Tim and Alvino laying down the cool rhythm groove and TC calls them out individually by name –  John, Andrew and Tim step out with some fine solos on the piano, guitar and bass.  Then right on the, “Horns, c’mon” cue from TC, Bill, and Lester bring it all to a closing crescendo.

Leading the potent rhythm, Alvino and Tim – on the drums and bass – could very well be at disc’s best on this eight-and-a-half-minute production of “Respect Yourself” (L. T. Ingram & M. Rice).  Having said that, the highlights of the track come three minutes in when Bill and Andrew get into back to back ninety second solos on the sax and guitar.

On another of their originals, everyone in the band is “Livin’ It Up” on this performance.  From the vibe I’m getting just listening on my computer I can tell the live vibe at the show had to be off the charts.  Jack Mack & The Heart Attack may be the hardest working band in soul business, but right here they’re having way too much fun for it to be called work.

So being the holder of the title, it’s only right to pay tribute to another of the hardest working soul bands and that’s exactly what the guys did during a twelve minute medley of “Simple Song”, “Stand”, “I Want To Thank You” and “I Want to Take You Higher” – all of Sly And The Family Stone fame.  For the record, this one was was called “Sly Medley”, and also for the record, it was funky as all get out.

Since all the tracks before this only totaled approximately fifty-five minutes I’m thinking that “I Walked Alone” – another original featuring TC singing his heart out – was certainly not intended to be the last track…..until the pipe bomb explosion sadly changed all that.

As the various 2020 awards ballots start coming around not too long from now, I’m expecting, “Live From Centennial Park, Atlanta – 1996” to get plenty of “Historical” attention.To find out more about the Jack Mack & The Heart Attack just go to www.jackmack.com.  Also, should you have not yet received your copy for airplay, please contact Betsie Brown atwww.blindraccoon.com.  Remember, wherever you go and whoever you contact, please let them know the Blewzzman sent you. – Peter “Blewzzman” Lauro Blues Editor @ www.Mary4Music.com