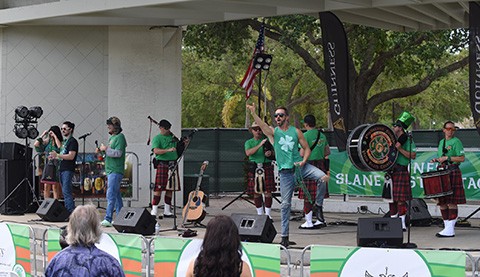 Irish eyes were smiling while other towns were green with envy. The 1st Annual Jupiter Irishfest kicked off successfully, despite the current pandemic restrictions. While distancing was sporadic, space was plentiful, whiskey and beer flowed freely, and the music created an immersive experience – transporting the audience from sunny, seaside Jupiter to the rain-kissed green hills of Eire. Produced by native Dubliner and Lieutenant Firefighter/Paramedic Dave McGovern, Jupiter Irishfest raised funds for charities close to the man and his family’s hearts: the Wounded Veterans Relief Fund (one of the event sponsors), the Southeast Honor Flight, Operation 300, and Friends of Public Safety and Renewal Coalition. McGovern invited some of his “brothers and sisters in blue” to don the plaid and take the stage at the inaugural event. The day long hootenanny started with the Palm Beach County Firefighters Pipes and Drums accompanying Irish-American ingénue Aine Murray singing The Star-Spangled Banner. Murray, a Music Major at University of Miami, is also the daughter of renowned Irish singer Tracy Sands. The pure sound of Murray’s soprano showed the apple doesn’t fall far from the musical tree.

McGovern planned the line-up perfectly, beginning the festivities with the man who started the Irish music scene in South Florida, the legendary Hugh O’Neill. The Belfast native struggled somewhat with the mic stand during the first half of his set, but that didn’t stop the audience from feeling the pain of loss and longing in songs like “Wish I Was Back Home in Derry.” In true Land of Erin fashion, O’Neill told tales between sets, explaining how the grand standard “Danny Boy” was written by an Englishman who recovered the original Celtic melody from a blind fiddler. As the day grew brighter and more green-clad families and patrons continued to gather, O’Neill impressed with his rich baritone, guitar and harmonica filling the amphitheater with a full trio sound. Yet, the artist kept the intimacy of a favorite pub room band. Sound issues continued to pop up, so the Palm Beach County Firefighters Pipes and Drums stepped up in full kilt to keep the songs flowing until all the kinks could be worked out. “Drunken Sailor” was once more played and the recent TikTok trend of sea shanty songs revealed a disproportionate number of the younger spectators joining in this audience-participant gem.

Next up to the stage was the golden-haired lass herself, Tracy Sands. She was accompanied by her longtime musical partner and songwriter Rod MacDonald. Sands, a native of Mayobridge in County Down, has joined in Irish events throughout South Florida. She has been seen on mainstages of SunFest, South Florida Folk Festival and the infamous Bad Abbotts Irish Festival in Boston. Sands and MacDonald drew the crowd in with fan favorites. She was as comfortable banging the bodhrán as she was with the tin whistle, and MacDonald successfully switched instruments without missing a beat. After all, he was instrumental in the Folk revival of the 80s, playing throughout the clubs of Greenwich Village and voted “Best Folksinger of All Time” by the New York Times before moving to the warmer stages of South Florida. The years have not slowed him down. His folksy rhythms of traditional Irish ballads blended perfectly with Sands’ contemporary, husky vocals.

Both Sands and MacDonald wrapped up, promising a return later in the evening with a full band (and wardrobe change). That’s when the radio personalities of the KVJ show took over, joining McGovern as he demonstrated traditional Irish hurling. Attendees were then invited to “give it a go” with a hurling net set up alongside the amphitheater grounds. Yes, people actually tried all day and night. No, there weren’t any mortal wounds. MacDonald had billed Jupiter Irishfest as a totally unique event, not seen in the area before. Beyond the sports demos, the producer presented medals to the outstanding Youth Sports team, which MacDonald has raised more than $400,000 for to date. Raffles were called and the importance behind each benefitting charity explained, including funds that benefit a fellow firefighter from a different unit who is currently undergoing Stage 4 cancer from the inhalation of chemicals during his daily job.

From afternoon to early evening, patrons poured in and immediately enjoyed beverages from the whiskey tasting tent, Pull A Pint Guinness bar, and the beer bar, which featured an array of Irish imports. Younger revelers sampled fresh lemonade, and all filled their plates from local Irish restaurants, McCarthy’s Irish Pub and The Bistro. The fair went beyond the banal corned beef and cabbage to include flaky chicken pot pie, fish and chips, corned beef sliders, pretzel bites with Guinness cheese, Kerry lamb pie, and traditional decadent desserts.

Adorable kids soon lined the stage for the first of the costume contests. They were followed by the multi-award winning Tir Na Greine Irish Dancers, whose choreography and indefatigable footwork will soon wow the judges at the state finals. Known for turning melancholy into something beautiful, so much of Irish music and culture is seeped in tales of loss and longing, but all serve as a remembrance of the one loved. McGovern continued to imbue the event with true Irish authenticity by taking the stage with a moving memorial to local Irish legends who had recently passed. One by one, a relative of the departed took the stage with enlarged photos held aloft featuring the deceased’s portrait. Sands took the stage to sing “The Parting Glass,” and her soulful voice brought a mournful hush to the entire arena.

Once again, Sands and MacDonald returned to the stage following a break, joined by the rest of the band, including fiery fiddler Rex Blazer, drummer Bill Meredith and bassist Mike Anglin. While the group belted and strummed out beloved hits, like “Galway Girl,” “Nil Li La,” and “The Night Paddy Murphy Died,” audience members cheered and joined in. The talent shined with more contemporary sounds, including “Dirty Old Town,” and originals, such as “A Walk in the Highlands,” written by MacDonald for Sands’ album. The number is a must for weddings, anniversaries or funerals (this is Irish music, so it can often be all three). Her trademark smile flashing, Sands led the crowd with “We All Need More Kindness” to close out the set with a musical, Irish blessing. The high-energy of the group was a good warm up for the final act of the night, Rogue Theory Band.

The disruptive sounds of Rogue Theory Band are produced by lead singer and electric violinist Harry Bayron, trumpeter and keyboardist Ransom Miller, trombone player Jose Miranda, guitarist John Frasca, Garrett Kealor on drums and Johnny Hays on bass. The eclectic mix of musical backgrounds, styles and training of the crew has created a genre-defying sound that turns the mournful “Fields of Athenry” into a high-energy romp one would swing a pint to. One moment Bayron was belting out the blues with “Tennessee Whiskey,” and the next he’s poised center stage, furiously fiddling his 3DVarious to a Flogging Molly cover. College students rushed in when Frasca climbed down the stage to perch, fingers strumming with intense concentration. A dizzying medley of classics – from the Beatles to The Who – flowed one into another with Bayron’s vocals stretching improbable ranges to accommodate the changing octaves. While Rogue Theory Band is based in South Florida, they would be right at home on Bourbon Street. Their strings and brass blend to form a perfect bridge between blues and rock, yet still unique in its own sound. The full band’s sound while covering Guns N’ Roses’ “Sweet Child of Mine” gave a glimpse into the Irish roots of our own, so-called American country and rock music. The sounds have forever gotten their origins from the early Irish immigrations in the and 18th and 19th Centuries. Reminiscent of The Pogues back in the 80s, Rogue Theory Band shared an authentic side of the Irish experience, one that revels in the craic and fills every moment with music and life – even in the sad songs. McGovern thanked everyone for the grand experience and promised Jupiter Irishfest would be back next year. Even if it remains only one day, based upon the uniqueness of the experience and quality of the entertainment, it would be a grand craic for all.