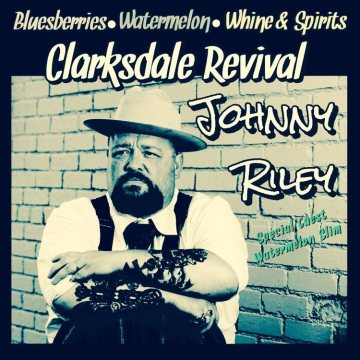 “Clarksdale Revival”, Johnny Riley’s fourth release, was recorded live at Bluesberry Cafe in Clarksdale, Mississippi.  Along with Johnny, on lead vocals and guitar, the music makers include: Walt Busby on guitar; Watermelon Slim on guitar, harmonica and hollers; Joe Eagle on drums; Seth Hill on bass; Art Crivaro on congas; and Fred McIntosh on harmonica.  The CD contains thirteen tracks with nine being Johnny Riley originals.

This disc opens with the first of two hollers, both written and performed by Watermelon Slim, and it’s simply titled “Holler 1”.  If, like me, you’ve seen his live shows, you know that there are few better than Watermelon Slim when it comes to hollerin’.  Although I can’t remember the exact year (maybe 2009 or 2011), I will never forget seeing Slim stepping away from the microphone on the stage at the Blues Music Awards and belting out a crisp and clear holler that could be perfectly understood and heard in every corner of the Memphis Cook Convention Center.  Both of Slim’s hollers address what seems to be the common denominator of these shouts – a life of hard labor under unpleasant working conditions.

The next track is an original of Johnny’s titled “Ain’t That A Shame”, and after hearing the lyrics, you’ll agree that it indeed is.  It’s a tale of Johnny’s father, a womanizing, con-man preacher.  While faking a life of humility and peace, he was a saint when in the church house, but preferring to administer humiliation and pain, he was a devil when at home.  Musically, Johnny’s burning guitar chords, Fred’s howling harmonica leads and the penetrating rhythm Seth and Joe are laying down, all provide that perfectly dark backdrop for Johnny’s powerful, gritty and soulful vocal style – which adds sincere and heartfelt truth to the song’s lyrics.

Six years ago, when I did a review of Johnny’s “Crossroads Of My Life” CD, my opening paragraph was…..”I don’t know what – if anything – Johnny Riley may have done for a living besides being a musician. Quite honestly, from what I’m hearing, I couldn’t imagine him ever doing anything else. With a voice like this, Johnny Riley was born to sing the blues.”…..When you hear him sing, you’ll certainly pick up on some rock, soul, Gospel and country as well but with that said, the word blues should always appear in conjunction with those words.  Speaking of country blues, this particular track is the type of song that put in the hands of a Blake Shelton, would easily top the country charts.  It’s an original titled “She Don’t Call Me Baby”, and with it’s melancholy lyrics that tell the story of a war torn patriot returning home to find he’s been jilted, the country folk would be all over it. That said, I’d actually like to see the song get into the hands of the right people and become a hit on the Roots Music Charts.

Picking the pace up some, “Life Of Sorrow” is a smoker that features Johnny doing his thing belting the hell out of the vocals and tearing up the guitar leads; Watermelon Slim all over the slide guitar; and not needing to be told twice, as Johnny gives him a “C’mon Freddy Mac”, Freddy rocks out on the harp.  Hot stuff for sure.

As you’ll discover when listening to Johnny Riley’s original songs, words like powerful, riveting, and compelling will come to mind as the common denominator for most of them, and “Erase The Pages” will be a testament to that.  This is a not uncommon story about how someone can become a slave to bad memories.  Sadly, and more often than not, alcohol becomes the tool used to erase those pages from their minds.  Led by fabulous acoustic guitar strummin’ by Johnny, despite the music being killer here as usual, it’s the lyrics that run away with this one.

Inasmuch as Johnny can be deep, he knows how to lighten it up, as well, and this was the perfect spot for it.  On a five-and-a-half-minute frolic titled “Johnny’s Boogie”, he and the band get into jam mode on a smoker that’s surely a dance floor filler.

Both lyrically and musically, “Change” is quite the powerful song.  Testifying about topical issues like “brother hating brother for the color of his skin” and  “Murderers and rapists going free for what they’ve done”; Johnny pleads “Lord, we need a change……..”.  That we do, Johnny!  As already mentioned, with a profound rhythm that’s been kicked up a notch by Art on the congas, the added guitar of Walt’s and some of the disc’s strongest harp blowing by Fred, the band is doing some testifying of their own.

Similar to the way the album opened up, it closes with the second of Watermelon Slim’s hollers aptly titled “Holler 2”.  And similar to the what he did on “Holler 1”, Slim nailed it.

Other tracks on “Clarksdale Revival” – what I’m calling a “must have CD” – include three other originals: “Talking To Your Headstone”; “Southern Born” and “Man Goin’ ‘Round Takin’ Names”; and covers of “Rolling & Tumbling” and “Death Come Creeping”.

To find out more about Johnny Riley just go to his website – www.johnyriley.com –  As usual, please be sure to tell him the Blewzzman sent you. – Peter “Blewzzman” Lauro