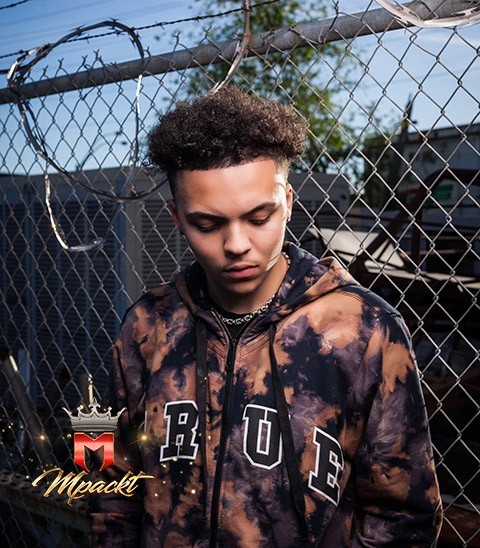 Looking at accomplishments that Mpackt has made, one wouldn’t realize that he is only nineteen years old. He has worked with world renown musicians Run-DMC and Wayne Static and actually, has been onstage since he was very young with his father. He also is a producer. Currently, he is part of the ‘Mr. Crawford Tour’ which he launched a Kickstarter campaign to not only help support the tour, but the creation of new music.

Catching up with Mpackt during the start of the tour, he revealed some details about his new show, his new music, a bit about his origins and what fans can look forward to.

SFL Music: What can fans look forward to with the show?
Mpackt: The fans can always just look forward to a great performance. Huge energy, you know what I’m saying? I’m there to give them a great show, so that’s what they’re gonna of course expect.

SFL Music: How did the tour come together with NoCap and (phone cut out).
Mpackt: and Big Yavo, yeah. So, the tour so far is going great! We just had our first show in Dallas last night. It was a great show. A huge crowd, something that I’m just now getting used to slowly but surely, but so far, it’s going great. We just made it to Houston now. We’re on our way towards the venue. Get everything situated.

SFL Music: Did you all know each other prior or what made you decide to tour together?
Mpackt: We actually don’t know each other at all. NoCap, well I’ve known of NoCap for a long time you know, from his music, but he doesn’t know about me, until now. So, he’s kind of just hearing how I sound as an artist, but I think he likes my music so far.

SFL Music: Your song “Stay Dangerous”, I really like the melody. It’s very catchy and the lyrics, you’re talking about the tough stuff in life. Would you elaborate about what inspired that song?
Mpackt: Yeah, so really with the song “Stay Dangerous” like I told you know, a few people before, it’s really more just a song for me. I’m from Las Vegas, so everything in Vegas, you’re supposed to be on point. So, I kind of really just made that song for myself. Just to remind myself to be on point with everything I do as far as music and the way I move in life and you know, just to stay dangerous.

SFL Music: What got you into music? What made you decide to choose this as a career?
Mpackt: I’ve been in music my whole life pretty much. My father is a musician, so that’s one of the reasons I kind of got into music, but I decided to take my own path, and being an artist and rapping and making hip hop kind of on my own behalf, but I’ve really just been into music my whole life. So, I decided to take it a step up.

SFL Music: You also do some producing. Did you have formal education in that?
Mpackt: I don’t. So, as far as producing, I’m self-taught that. I’ve been doing it for about four and a half years now, but YouTube isn’t too band as a teacher. You know, it’s probably my best teacher I got right now as far as my producing, but other than that, I’m just self-taught that.

SFL Music: Very impressive. What would you say inspires your music on the whole? This tour is around the third anniversary of your mom’s death and I’m so sorry for your loss. What would you say inspires your music?
Mpackt: Definitely my mom’s passing was huge inspiration to move forward with making music, but you know, I just love it. Music is everything to me. Without music, there’s no me, you know what I’m saying? So, it’s really just how I feel about it. Even if I wasn’t an artist or anything like that, I would still be a producer, make my music privately, you know, whatever I was doing. Music will always be a part of my life.

SFL Music: Yes.
Mpackt: Really, I just look for good talent. I’m not very picky as far as music. I’m very diverse, so I’m open to hearing new artists and new sounds. I don’t exactly look for anything particularly other than confidence and somebody who really cares about themselves as far as their career.

SFL Music: What would you recommend to a young musician just starting out?
Mpackt: I recommend, every artist who is young and up and coming to keep doing their do, you know what I’m saying? Don’t let up, especially like as far as giving up because you got to stay confident in yourself. You got to know whether you want this or you don’t, you know what I’m saying ‘cause there’s no in-between. You go head first or you know, just don’t go at all.

SFL Music: That’s great advise. What would you say being from Las Vegas contributed to your music or if at all?
Mpackt: Being from Las Vegas, we don’t have a huge community for rappers. We do have an underground scene going on, but we don’t have major artists coming from Las Vegas or anything like that nowadays. So, being from Vegas, it’s definitely like, it inspires me to make a sound for my singing and hopefully get artists onto it and make a movement out of it instead of keeping everybody underground. It’s not like L.A. where most biggest artists are from the West Coast and California and things like that. You just don’t hear anything about Vegas, so that inspired me to make something happen for it.

SFL Music: Your song “Stay Dangerous” is out now. Are there any new singles or videos coming out down the line?
Mpackt: After the tour, I look forward to dropping more music. We’re working on a record right now, so definitely a music video will be coming up soon as well. That will be around the end of May or so.

SFL Music: Was there anything else you wanted fans to know about the show?
Mpackt: Any fans that can get to the show just you know, look forward to a great performance and make sure you guys check out all my social media. Its @mpacktofficial all platforms. Mpackt. You guys can check me out and keep up with me. I’m looking forward to finishing the rest of this tour and having a great performance every single night.