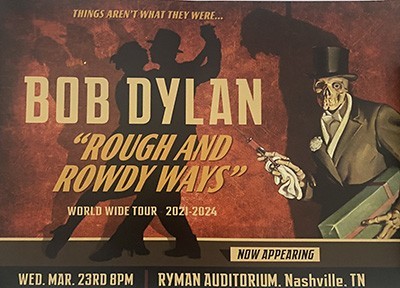 There was a thick buzz of excitement in the air as Bob Dylan took the stage on March 23rd at the famous Ryman Auditorium. Located in Nashville, Tennessee, the Ryman Auditorium was the home to the Grand Ole Opry for more than thirty years, with a star-studded list of performers including Johnny Cash, Hank Williams, Minnie Pearl and Patsy Cline. In 1974, the Grand Ole Opry moved out and the Ryman sat empty and was almost demolished, but thankfully Nashvillians fought to save it and restored it in the early 1990’s. Today, it is considered one of the best music venues in the country. Originally constructed as a church, it still contains church pew-seating, and has stunning and unique acoustics, making it a favorite music venue for performers and fans alike. It was the perfect place for Bob Dylan to showcase his 2020 masterpiece album, Rough and Rowdy Ways. He played the entire album except the almost seventeen-minute “Murder Most Foul.” The experience of hearing Bob Dylan in this venue was akin to a religious experience, reminiscent of any Leonard Cohen concert. Dylan is so cool that he’s practically an ice cube but he seemed to thaw out and actually enjoy playing for a live audience. The pandemic forced time off did him well. He didn’t rush through anything as he has sometimes done in the past and you were more able to understand what he was singing. He looked sharp and dapper and seemed younger than his 80 years (81 on May 24). The show started exactly at 8:00 pm and ended at 9:35 pm, but Dylan and his band gave it their all for seventeen songs and the crowd appreciation was tremendous. The poetry of life pours effortlessly out of Dylan and it’s so impressive. People are constantly overanalyzing every lyric. I am not that deep or qualified to do so. All I know is that his phrasing and delivery is what makes his lyrics come to life and no one captures them as he does. He is artistically brilliant. How he remembers all the words is beyond belief for any age.

His latest musical work is fresh and contemporary, with Americana, Blues, and Folk leanings. Dylan is not, by any means, rehashing the 1960’s and he didn’t perform his most popular hits from that time, and that was probably a good thing. He did intersperse some carefully chosen older songs that he wanted in the set. This was a concert for today’s times and there seems a new urgency for him to connect to his audience in a way that had seemed to be lost. He was very inspired and his band was stellar, as always. His longtime guitarist, Charlie Sexton, was not on this tour and certainly missed, but Doug Lancio, his replacement, did just fine on guitar. Bob Britt was also on guitar and Charlie Drayton replaced Matt Chamberlain on drums. Tony Garnier on bass and double bass added excellence, visually and musically. Multi-instrumentalist, Donnie Heron (Pedal Steel, Lap-Steel, Banjo, Violin and Electric Mandolin), was outstanding. Dylan played upright piano the entire time, stepping out briefly and occasionally between songs for a second or two, to acknowledge the audience who replied enthusiastically. Fans came from all over the country and were an eclectic, middle-aged, white-haired crowd. Phone use was absolutely forbidden and strictly enforced. No photos, no videos, no texts and it was nice not having phones blocking your view. Dylan signaled if anyone tried to video and they were quickly shut down. He wanted the audience to experience his concert without cell phones. Posted audio on YouTube from this performance does not do the concert justice. You really had to be there.

The show started with “Watch The River Flow” from Bob Dylan’s Greatest Hits Vol II and “Most Likely You Go Your Way (And I’ll Go Mine)” from Blonde on Blonde, and were crowd pleasers, but where Dylan really shines these days is on his new music. “I Contain Multitudes” and “False Prophet” followed, both from Rough and Rowdy Ways. “I Contain Multitudes” is beautifully done and jam-packed with so many clever lyrics. “False Prophet” swings and swaggers as it does on the album and performed live is a real highlight. “When I Paint My Masterpiece” was written by Bob Dylan and first put out by The Band on their 1971 album Cahoots and released by Dylan a few months later, in 1971, on his album Bob Dylan’s Greatest Hits Vol II. As for painting a masterpiece, he sure did paint a ton of fabulous paintings that were on display at the Frost Museum in Miami recently. No end to his talent. “Black Rider” was dark, brooding, and mysterious. It was another gem from his new album. “I’ll Be Your Baby Tonight,” from his 1967 album, John Wesley Harding, had the band running on all cylinders and some cool piano jamming by Dylan, with his entire body bopping to the music. Another haunting and hypnotic new 2020 song is “My Own Version Of You,” as he sings morbidly of collecting body parts to build his own creation. Again, he drops so many lyrical references that only an artistic mind could connect it all together. It’s all fascinating how he comes up with these ideas. “Crossing The Rubicon” is a song that would make any blues fan happy.

“To Be Alone With You,” from his album, Nashville Skyline, blended well with the other songs. A gentle and mellow “Key West (Philospher Pirate)” was low-key and maybe a little too mellow, as it got a bit lost when done live. Then things kicked up with “Gotta Serve Somebody,” which was supercharged and up-tempo. It was one of the highlights from his older songs and it sure rocked. It’s from his 1979 album, Slow Train Coming, and possibly the best version of it. “I’ve Made Up My Mind To Give Myself To You” is a touching love song and could also be Dylan’s message of dedication to his fans as well, after a lifetime of performing for us. He has given himself to us and he is not done yet. His “Never Ending Tour” started in 1988 and is slated to run until at least through 2024. The pandemic caused his longest hiatus in decades. “Melancholy Mood” was taken from his 2016 Fallen Angels album which was primarily classic American songs that Frank Sinatra had covered. This one had originally been a B-Side to a 1939 single that featured a young Sinatra. Now Dylan makes this his own. “Mother of Muses” is one of the most beautiful tracks from Rough and Rowdy Ways. Dylan sings it in his softest and sweetest voice, which has been improving. “Goodbye Jimmy Reed,” another blues number, showcased his phrasing and perfect delivery with such lyrical gems as, “I need you like my head needs a noose.” His sense of humor is evident throughout. Bob bopped along to his music and introduced the band, even stopping to say to the audience, “Nice to be back in music city…Is it still?” “Every Grain of Sand” from Shot Of Love closes the show on a soft note. Dylan has once again proven he is the King of Cool.

Bob Dylan Setlist – Ryman Auditorium Nashville, Tn March 23, 2022
Watching The River Flow
Most Likely You Go Your Way (And I’ll Go Mine)
I Contain Multitudes
False Prophet
When I Paint My Masterpiece
Black Rider
I’ll Be Your Baby Tonight
My Own Version Of You
Crossing The Rubicon
To Be Alone With You
Key West (Philosopher Pirate)
Gotta Serve Somebody
I’ve Made Up My Mind To Give Myself To You
Melancholy Mood
Mother Of Muses
Goodbye Jimmy Reed
Every Grain Of Sand 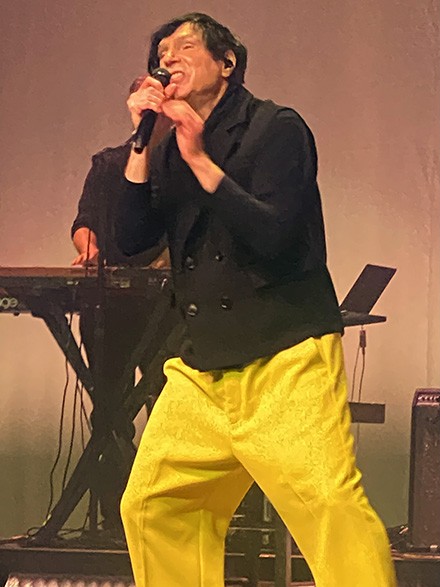 On March 22, the evening before Bob Dylan’s brilliant performance, one of the most underappreciated bands in the world, Sparks, played the Ryman Auditorium for their first time and they were overjoyed to be playing there. As for their dedicated cult following of fans, which includes me, who came from near and far, we were ecstatic. They exceeded all expectations and performed a fabulous show mixing a varied collection of their songs, from their fifty plus years together. They had enough great songs to play for hours more. It was wonderful to see the ones they did do. They have released 25 albums, but even Edgar Wright’s 2021 documentary on them called The Sparks Brothers, and Sparks/Leos Carax’s 2021 movie Annette starring Adam Driver and Marion Cotillard, haven’t made them well known to the general public. When I told people I was flying to Nashville to see Sparks, almost no one knew who they were. Maybe Apple featuring their song “This Town Ain’t Big Enough For Both Of Us” in their new commercial will help. With Sparks’ luck…probably not. It bothers their loyal fans more than it bothers them. They are comprised of two brothers, Ron and Russell Mael from Los Angeles that made more of a splash in England when they came out all glam rock in the 70’s with the wittiest lyrics and great distinctive melodies. Todd Rundgren recognized their talent and produced their debut album. In 1979, they dabbled in an electronic direction for two albums produced by famed producer Giorgio Moroder. They collaborated on an album with Scottish rock band Franz Ferdinand called FFS in 2015, which brought them back into the rock format, and then released another two superb rock albums in 2017 and 2020. They can actually write a song about a lawnmower and make it work. “Talent Is An Asset” (one of their early songs) and Ron and Russell have it. Genius talent, that is. Ron is behind all the lyrics and symphonic perfection on keyboards. Russell’s gorgeous falsetto voice still remains as does his good looks, making him a quintessential frontman. Underrated and overlooked, at least musicians know how influential they have been. They belong in The Rock and Roll Hall of Fame. I loved every song and every minute of it.

So, for a music junkie fan, two unforgettable evenings at the glorious Ryman Auditorium, seeing the delightful and wonderful Sparks (my bucket list concert), and then seeing one of the greatest songwriters of all time, Bob Dylan, the next night was like dying and going to musical heaven. Both are enormously talented, still amaze, and show no signs of slowing down. Catch them if you get the chance. So worth it!

Sparks Setlist – Ryman Auditorium Nashville, Tn March 22, 2023
So May We Start
Angst In My Pants
Tips For Teens
Under The Table With Her
Get In The Swing
I Married Myself
I Predict
Wonder Girl
Stravinsky’s Only Hit
Shopping Mall Of Love
Johnny Delusional
We Love Each Other So Much
Edith Piaf (Said It Better Than Me)
Lawnmower
Music That You Can Dance To
The Rhythm Thief
Never Turn Your Back On Mother Earth
When Do I Get To Sing “My Way”
My Baby’s Taking Me Home
The Number One Song In Heaven
This Town Ain’t Big Enough For Both Of Us
Suburban Homeboy
All That