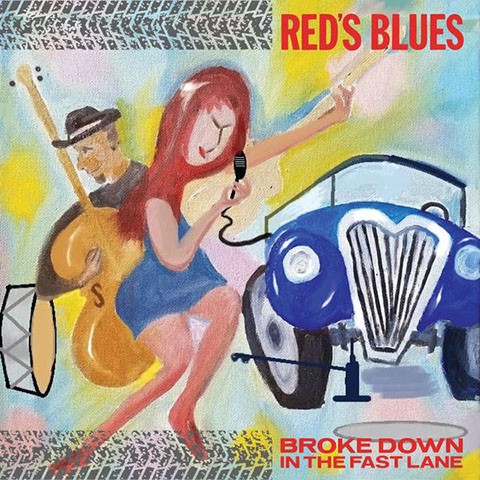 “Broke Down In The Fast Lane” is the third release for Sacramento, CA based Red’s Blues.  The band is fronted by the husband and wife team of Richard “RW” Grigsby on bass, vocals and harmonies and Beth Grigsby on vocals and harmonies.  Filling things out are Doug Crumpacker on guitar, vocals and harmonica; and Tim Wilbur on drums, percussion and vocals.  For this project, RW and Beth enlisted the help of some very recognizable special guests: Johnny Burgin on guitar; John Cocuzzi on piano; Rick Estrin on harmonica; Sid Morris on piano and organ; Kyle Rowland on guitar and harmonica; Kid Anderson on Wurlitzer and harmony vocals; and Grub Mitchel on piano and harmony vocals.  The album contains eleven tracks of which ten are band originals and/or compilations.

The opening and title track – “Broke Down In The Fast Lane” (RW & B Grigsby) – is a tale about being in one of those “where in hell is a cop when you need one?” situations.  As Beth says “I’ve never cared much for the CHP, but now I’m praying for the blue lights to rescue me”.  With horns blaring as cars whiz by and radiator fluid leaking and mixing with the rain, Beth’s hoping for an angel with a tow bar and a chain.  This slowed down shuffle features an appropriate chug-a-long type rhythm by RW and Tim; a melancholic harmonica and guitar vibe by Doug and Johnny B and somewhat of a lively – I think help is here kind of feeling – piano lead, by Sid.

Had this been the very next track it would have been somewhat of a segue.  It’s titled “Road Scholar” (RW Grigsby) and it’s a song about musicians who spend too much time on the road working for too little pay.  Sadly, I think I personally know a few dozen of them.  Musically, it’s an up-tempo shuffle featuring Tim spinning tales from the road, with hot tandem guitar leads by Johnny B and Doug, intertwined by more good piano highlights, this time by Grub.
Yet another fine piano presentation, by yet another fine pianist – this time it’s Sid Morris – giving “Howlin’ Winds” (Joe Turner) somewhat of a N’awlins Dixieland Jazz vibe.  You know – that kind of wailing you hear while walking down Bourbon Street that ya just gotta follow till you find a bunch of people partying at the jook joint at the end of a courtyard.  Yeah, that!  Along with multi Blues Music Award winner Rick Estrin doin’ some howlin’ of his own on the harmonica and Beth sounding like she’d have been a force to be reckoned with back in the days of those sultry jazz lounge singers, this is indeed one of the disc’s best.

Five songs in and I’m seeing several interesting patterns.  Most importantly, it seems as if all the tracks feature killer piano leads – this one is again by Sid –  and a lot of the songs have road themes…..go figure!  This one’s called “Jackknifed” (RW Grigsby & M Hummel).  The truckin’ rhythm is the perfect vehicle for this hard drivin’ song about the perils that sometimes come with hard driving.  Additionally, Mr. & Mrs Grigsby have the lead and harmony vocals in high gear and Johhny B is living up to that “Rockin’ Johnny Burgin” moniker he’s come to be known for.

As many times during this track that you might want to shout out “Wooly Bully” – and there will be several – don’t!  This one is titled “40 Years Of Trouble” (RW & B Grigsby) and musically, Sid’s organ led rhythm is a bit reminiscent of that Sam The Sham And The Pharaohs classic and this time, with the lead and harmony vocals reversed it’s Mrs and Mr. Grigsby belting out a fun filled, dance floor filler for sure.

I’ve already mentioned about how impressed I am with the many pianists (four) performing on this release but equally as impressive is the way the lead vocals get very effectively passed around as well. That said, “G.O.N.E.” features another outstanding piano solo and this time it’s at the hands of John Cocuzzi. It also features Doug C taking a song he wrote and running with it.  In addition to a fine vocal deliverance his strummin’ and pickin’ give this one a cool country feel.  Nice stuff!

So, this Grigsby’s original has me thinking RW must be pretty hot stuff.  As Beth tells it, the ladies are constantly telling her that her man is so fine.  Although appreciative of the compliments, her take is “‘Hand’s Off’ he’s mine!”  As a matter of fact, he’s sounding mighty fine right here with some of his best work on what sounds to me like a stand up bass.  That, along with John C laying down a polished jazz combo sound on the piano, sets just the right mood for Beth to do that sexy jazz singer thing she seems so comfortable with.  Damn, she even closes it out with some stylish scat.  Having been a jazz buff in my younger days, I’m loving this one.

Other tracks on “Broke Down In The Fast Lane” include: “Flim Flam Man” (RW Grigsby); “Sweet Karma (RW & B Grigsby);  “A Word About Gossip” (L Johnson & RW Grigsby); and “Say What!” (D Crumpacker).   Not having their first two releases now has me wondering what I’ve missed out on.

To find out more about Red’s Blues just go to their website – www.redsbluesband.com – Peter “Blewzzman” Lauro