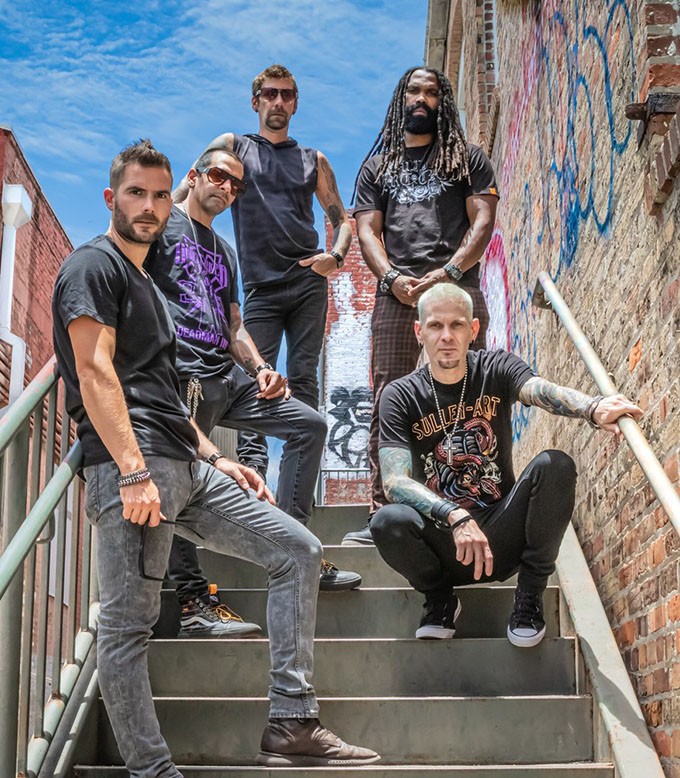 Change is good, but for Tampa, Florida’s Weapons of Anew, it’s great! Their new Lead Singer Richie Hume has completed the band comprised of Guitarist Freddy Ordine, Guitarist Kevin Hicklin, Bassist Stefan “Reno” Cutrupi and Drummer Chad Szeliga (formerly with Breaking Benjamin and Black Label Society), and now they are working on their latest album as well as upcoming concerts. They will bring their amazing show to Tampa at the VooDoo Bash at Dark Door Spirits Distillery this Friday August 13th and Saturday August 14th.

Catching up with front man Richie Hume, this extraordinarily talented musician revealed some details about their new music, show and what fans can look forward to.

SFL Music: I’ve read the band is excited about you coming onboard. What drew you to the band Weapons of Anew?
Richie Hume: So, Freddy and Reno live in my area, and through our management, I got to know them. I heard their band and just their raw sound and their energy and their aura kind of was appealing to me. We linked up and you know, had a few rehearsals together. Just the synergy was there. It felt really good to both sides, so we ended up continuing to work together for a little while, and then they made the determination that I was gonna be their next lead singer and I was thrilled about it. So, I was excited to get to work with them and get touring and playing as much as possible.

SFL Music: That is exciting! So, you’re in Tampa?
Hume: Yeah, I’m in Tampa. I’ve been living in Tampa for the past three and a half years.

SFL Music: What would you say about Tampa having an influence on you and the band?
Hume: So, there’s a great network of musicians in the area. We’ve been able to go out and see some of the talent. The open mics, and I’ve been playing gigs around town for the past three years. Just a lot of the musicians in the area that I’ve had the privilege of watching and some playing with have influenced myself, and I know that Freddy and Reno and those guys from the bands that they’ve been able to go out and see in local scene, they feel inspired as well. Just a great town. There’s a lot going on. A lot of places to play and for musicians, I think we really feel as though it’s up and coming and we’re excited about that. Excited to be a part of it.

SFL Music: Your version of “Sick Boy” (cover of The Chainsmokers song) has been played on the radio and there are one million streams. What would you say inspires your music?
Hume: So, sort of one of the driving inspirations of our music I think, is definitely our themes of perseverance, never giving up, you know, a lot of the life, love and loss that we experience through life. We get together to write songs and it’s just interesting what comes out when we collaborate together. All of us are influenced by different artists within the same genre. We really like to sort of talk about our influences. We’re always sending each other music. Listening to what one another has to say to make it as much of a collaborative environment as possible when we get together and create music. We’ve really gotten to know each other through that process which has been great.

SFL Music: Who would you say were your influences?
Hume: Me personally, some of my biggest influences were in the early nineties. Bands like Alice in Chains and Stone Temple Pilots and Soundgarden, but I also love some of the classic metal bands like Pantera, Metallica, and Black Label Society.

SFL Music: What influenced you to become a musician?
Hume: I’ve really been playing music my whole life to be honest with you. I’ve been singing since I can remember, and I’ve been playing guitar since I could pick one up you know, at about second grade. It’s just intrinsically part of who I am. You know, I’ve tried other career paths, but I know that I gravitate towards music. It’s something I’m gonna do ‘til the day I die.

SFL Music: That’s very cool. The Album ART OF WAR. What inspired it? How did it come about? Was there a theme?
Hume: So, the Art of War is actually our upcoming record and like I said, we’re inspired by sort of life, love and loss. I’d say it’s the overall theme of that record. Getting to know each other creatively, it’s just been a great journey. So, like I said, it’s been a lot of discussing influences and sort of listening to one another and really getting to know each other in a creative sense.

SFL Music: I know you have a show coming up. Have you performed together yet or not yet?
Hume: This will be my first time performing with the band.

SFL Music: What would you want fans to know about the live show to look forward to?
Hume: Just a juxtaposition of styles you know, similarly to when we create music. You’re gonna notice we’re all under the umbrella of hard rock we’re into, but we draw influences from everywhere, and each member of the band brings something different to the team. Taking those different influences and applying them to become one unit and work as a team, I think is really gonna radiate with audiences and allow us to connect with fans of all different interests. We look forward to getting out there and meeting everybody and just having a really good time and giving ‘em a good night of heavy rock and roll.

SFL Music: People will be looking forward to that. From your experience, what would you advise an up-and-coming musician?
Hume: Stay at it. Never quit, you know. Never quit. if you love it, it’s who you are, and It’s what you’ll do for as long as you can.

SFL Music: So, the videos with coincide with the releases of the singles?
Hume: Yeah, yeah. We’ll put out the music videos as the singles come out.

SFL Music: So, what brought you to Florida? You’re from Connecticut?
Hume: Yeah so, I moved down three and a half years ago for some family issues. My mom was sick and I came down to be with her, and she unfortunately passed due to pancreatic cancer, but I stayed down here because I really liked the area and started playing music again. Eventually got to work with my manager and that’s eventually what led me to meet Freddy and the guys.

SFL Music: People will be looking forward to great new music. Is there anything that you wanted to add for fans to know about you or the band?
Hume: Just stay tuned. If you like heavy rock and roll, you’re in the right place with us. We look forward to continue to create music together and continue to get to know our fans along the way, and to see all their faces out when we’re on the road.