RICK WAKEMAN Returns to the US 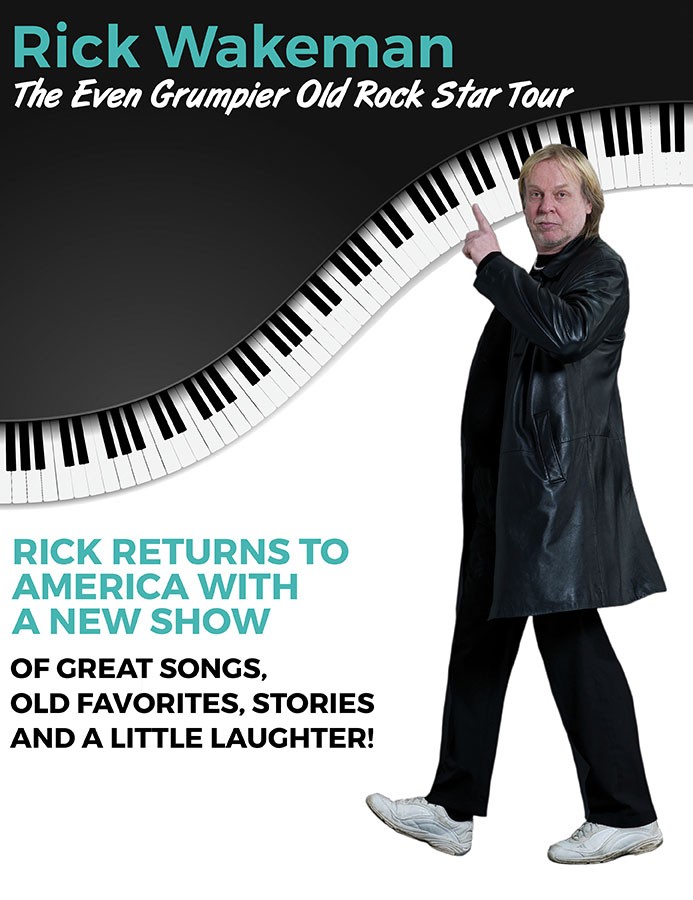 Rock Royalty
RICK WAKEMAN
Returns to the US

with a Solo Show Full of Music and Mirth

Keyboard wizard Rick Wakeman has two reasons to celebrate. First, his outstanding career in music has just been recognized by Queen Elizabeth II, who named him a Commander of the Order of the British Empire (CBE) in her recent annual Birthday Honours.

Having made his name creating prog rock extravaganzas, in his solo shows Wakeman returns to his roots with a programme packed with virtuosic piano performances and hilarious anecdotes, inspired by his 50-plus-year career. Repertoire will range from his solo works and his stints in the band YES through to his early days as a session musician playing keyboards on such classics as David Bowie’s Life On Mars, plus surprises like his unique interpretations of Beatles’ hits and many more memorable tunes, adapted for the grand piano. And all of this glorious music is punctuated by riotous reflections on his life and the people he’s met along the way. As he himself often observes, life is rarely dull when Rick Wakeman is around!

Professional musician, keyboard player, songwriter, broadcaster and raconteur, Wakeman’s career started as a much-in-demand session player, who performed on recordings by David Bowie, Elton John, Lou Reed, Al Stewart and hundreds more artists. His big break came in 1971 when he joined YES, who went on to become the most successful prog rock band in the world, but Wakeman has also always gone his own way outside the framework of that group.

In the Seventies, he achieved chart-topping success with solo albums such as Journey To The Centre Of The Earth, The Six Wives of Henry VIII and The Myths and Legends of King Arthur and the Knights of the Round Table, which cumulatively sold over 10,000,000 copies in North America alone.

He has written several film scores, amongst them two for director Ken Russell (Lisztomania and Crimes of Passion) and two ‘Harry Palmer’ movies starring Michael Caine (Bullet To Beijing and Midnight in St Petersburg), and in the UK, has built up an impressive reputation as a witty guest and host on shows like Grumpy Old Men, Countdown, Watchdog and the comedy cabaret show Live at Jongleurs. His wickedly irreverent acceptance speech when YES was inducted in the Rock and Roll Hall of Fame in 2017 nearly brought the house down!

That same year, he made British chart history when his Piano Portraits record became the first solo piano instrumental album to enter the UK’s Top 10 on release – a feat he then repeated 2018’s Piano Odyssey. Both records feature tunes that have a special connection with Rick’s personal musical journey and his subsequent tours, in which he performs a selection of tracks accompanied by hilarious memories and anecdotes have been instant sell-outs in the UK.

Now the achievements of his incredible career have been officially recognized with a CBE in recognition of his services to music, so come and celebrate with him on his forthcoming tour. And don’t worry – Rick will still find plenty of reasons to be grumpy…

“A wonderfully intimate, hilarious, and jaw-dropping performance… Not a grumpy soul in the room, least of all Mr. Wakeman himself.” – Parklife DC

“A dazzling display of dexterous fingerwork on the ivories.” – www.vintagerock.com

“A hugely enjoyable night for fans and newcomers to Rick Wakeman. Genuine laughs and exquisite musicianship – what more can you ask for?” – Lancashire Telegraph

“The audience… were thoroughly entertained with masterful piano playing and wonderous stories.” – Global Entertainment and Media

“No other artist could entertain a theatre full of people, playing alone, and keep them riveted for the entirety of his set. Rick is one of the warmest, wittiest, most talented musicians around.” – Wolverhampton Express & Star

“Prog lover or not, if you get the opportunity to see Rick Wakeman, go for it; he’s a national treasure, and he’ll make you laugh too.” – Bucks Herald

And from YES’ 2017 induction into the Rock and Roll Hall of Fame:

“Rick Wakeman’s ornate, detailed keyboard work… was just the icing on the cake… Wakeman had already brought the house down with an acceptance speech that contained a hilarious stream of dirty jokes.” – Rolling Stone

Copyright © 2021 Chipster PR & Consulting, Inc., All rights reserved.
You are receiving this announcement because we want you to be among the first to know about this great news! Interviews, tickets and review copies are available upon request. Thank you for your interest in our clients, we appreciate your help in spreading the word!