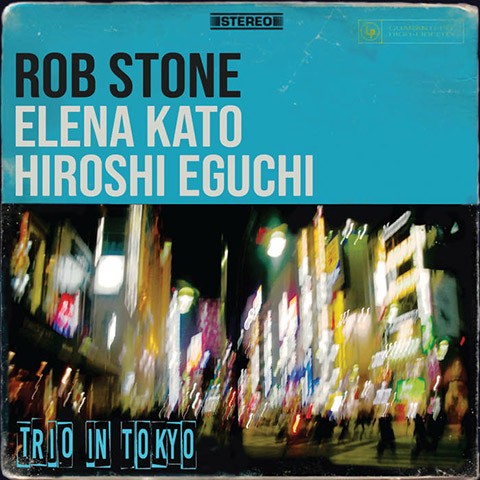 To this day I still enjoy the music of the genre, but prior to my music interests being totally consumed by the blues, I was a huge jazz fan.  As a matter of fact, during the mid and late seventies, this hippy maintained an annual membership at Sonny’s Place, a jazz lounge located in Seaford, New York.  From the local and touring acts I saw there, to the national and international stars I saw during my frequent trips to “Newport In New York”, I have never seen a three piece jazz combo with a harmonica player as the front man.  It just wasn’t a thing – that is, until Rob Stone, Elena Kato and Hiroshi Eguchi very recently – and wonderfully – made it one.

Being quite familiar with his music, Rob Stone’s latest release –  “Trio In Tokyo” – is unlike any of his previous releases, some of which included legendary bluesmen like Eddie Shaw, John Primer, Henry Gray, Willie “Big Eyes” Smith and many more.  “Trio In Tokyo” features Rob Stone on vocals and harmonica, Elena Kato on piano and Hiroshi Eguchi on bass, with guest bassist Brad Hayman appearing on a track. The album features nine tracks of vintage jazz and blues standards and an original penned by Rob.

The opening track could be something you’d hear coming from a juke joint on Bourbon Street, something being played onstage at the Chicago Blues Festival, or something you’d hear from that three piece combo performing at Sonny’s.  It’s a swinging shuffle titled “No Money” (J. Alexander) and it features Rob sounding smooth on the vocals and sharp on the harp; and Elena and Hiroshi, showcasing the chemistry that comes from many years of playing together, on the piano and bass.

There’s an interesting story as to how Rob’s friend and music associate, the late and great Big Jay McNeely is pretty much the reason why I’m actually listening to and writing about “Trio In Tokyo”.  That said, I won’t get into all the details, ’cause once you purchase the album, you’ll read them for yourself.  This song, which was written by Jay and was scheduled to be recorded by him and Rob, is the oft covered “There Is Something On Your Mind”.  Interestingly, just a few days ago I listened to the B. B. King and Etta James version.  Like all of these timeless classics, inasmuch as it’s great hearing them done by others, there’s no need to reinvent them – just put your heart and soul into it and do them the justice they deserve.  That’s exactly what Rob, Elena, and bassist Brad Hayman did, when they nailed it on this fabulous five-and-a-half-minute rendition.

He may have been a Texan but his boogie woogie style of play might have you thinkin’ the late, great Amos Milburn was a Cajun.  On his “Money Hustlin’ Woman”, a song off of his very appropriately titled “Blues, Barrelhouse & Boogie Woogie: The Best Of Amos Wilburn 1946 – 1955”, while Rob blows some of the discs best blues harp, Elena skillfully showcases some of her own boogie woogie piano runs.

Other than Rob counting off the start of the song twice, with the second time being necessary because of his joyful admission to hitting a wrong note the first time, the original “Blow Fish Blow” is a snappy, uptempo instrumental.  With Elena and Hiroshi laying down a lively rhythm behind him, Rob puts on a masterful harmonica performance worthy of being mandatory listening for novice players.

The disc closes out with Lead Belly’s historical “Goodnight Irene”, recorded in 1933 at the Louisiana State Penitentiary – most commonly known as Angola Prison.  Except for a short solemn harmonica riff towards the end, the track features Elena on a wonderfully peaceful piano performance while backing Rob on an extremely emotional and heartfelt vocal performance.  This is the kind of attention commanding performance that during a performance in an auditorium the size of a Carnegie Hall, you’d be able to hear a pin drop. Very nicely done.

To find out more about Rob Stone just go to his website – www.robstone.com –  Peter “Blewzzman” Lauro

Pink Floyd and the Dark Side of the Moon: 50 Years