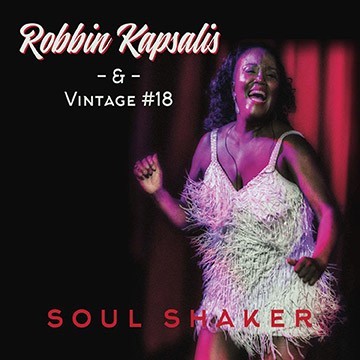 “Soul Shaker” is the second release for Robbin Kapsalis and Vintage #18. The band, who have been playing together for eight years now, consists of: Robbin on vocals; Bill Holter on guitar; Mark Chandler on Bass; Alex Culdell on drums and percussion; Ron Halloway on saxophone; and Thomas Williams and Vince McCool on trumpet; The album features eleven tracks of which seven are band originals.

Having emceed several shows that featured Robbin and the guys I can honestly say that this act is a force to be reckoned with; and from her custom made all white mic and stand, to her all white tasseled outfits, to the way her gyrations wildly toss those tassels around, Robbin simultaneously raises both the flair and energy bars to a whole other level.

On the one-sheet that accompanied the album, Robbin claims that the bands goal was to “Bring that live energy we’re know for to each and every song”. That said, it wasn’t very long into the disc’s opening track, “Shake It Baby” (Blackmore/Guy), before that statement was validated. The track opens with Mark – laying down some seriously deep bass grooves; Alex – having no mercy on the drum kit; and Bill – tearing off smokin’ guitar riffs; basically it’s a three-way musical slug fest. Then, shortly after the boss lady starts singing and howling the blues, Ron and Vince hit the ground with their horns running and yes, all hell is now breaking loose. Absolutely no further explanation necessary.

On a track titled “Boogaloo”, the chorus line features Robbin sassily singing “I want you, to show me how to boogaloo”. As I pretty much testified to already, Robbin Kapsalis does not need any one to show her how to boogaloo – or for that matter, any other dance, as well. The song actually finds Robbin singing it to a dance floor full of movers and shakers and not only is she encouraging them to show her how they boogaloo, she and the guys are also providing them with the vehicle to do it with.

“Living Large” (Deb Ryder) is one of the the slower tracks of the bunch. With Mark and Alex in a sweet rhythm groove and Bill getting in some scorching slow blues licks, the song pretty much features Robbin putting on a vocals 101 class. Showing you don’t need to be a soprano to hit the high notes, Robbin – with that deep voice her family teased her about as a kid – showcases her absolutely fabulous range.

From very well known vocalists to local lounge acts of any genre of music, if you had a dollar for everyone – male or female – who has ever sang this song you’d be able to put a large dent in the national budget’s deficit. That said, the versions that gives me a “Fever” (Coolkey/Davenport) are the jazzy one’s performed by a sultry sounding woman like a Sarah Vaughan or a Peggy Lee – the one who pretty much started it all. Speaking of sultry singers, Robbin is indeed doing the song justice on this hybrid version. Hybrid in that she’s got the steamy and jazzy thing going on with the vocals; Mark’s bass lines sound as good as any jazz bassist I’ve ever heard; Alex’s edgy drum work has a bit of a rock vibe; and there’s no questioning that the way he’s bending those strings, Bill’s playing the blues.

So the next time I see Robbin live, I will be looking very forward to hearing this one. It’s a smoker called “The Cannonball” (Williams) and with the band in pedal to the metal mode and the attitude Robbin’s belting this one out with, I just can’t wait for the sizzling, visual effects.

The disc closes with it’s second performance of “You Don’t Deserve Me”. It’s officially called the “Extended Groove”, but for all intensive purposes let me just say it’s the twice as long, steroidal version of the first performance. Not being the type of woman you’d want to piss off, if you’re the kind of man who stays out so late that the only things open are a bottle of gin and a pair of legs that don’t belong to her, it’s probably in your best interest to just never come home at all.

Other tracks on on “Soul Shaker” that will get more than your soul shakin’ are: “Lost Souls”; the shorter version of “You Don’t Deserve Me”; “Jukin'”; “From The Hearts Of One”; and “Silver Spoon”.

To find out more about Robbin Kapsalis & Vintage #18 just go to their website – www.vintage18.net – and if you haven’t yet received your copy of “Soul Shaker” for airplay, please contact Jill Kettles at Jill@missjillpr.com. Also, make sure you check out the Galaxie Agency, as well, by going to www.thegalaxieagency.com. Of course, whomever you contact, please make sure you tell them their friend, the Blewzzman, sent you.