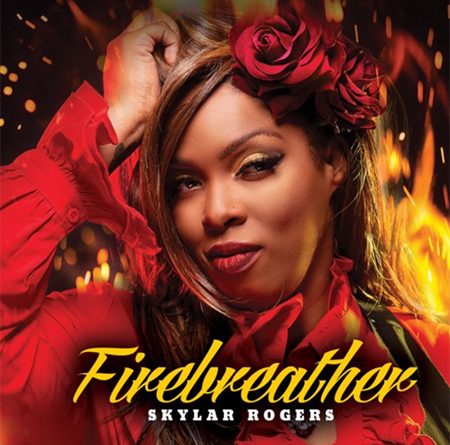 So there’s a show on TV called “I Can See Your Voice” and on it, a contestant has the chance to win a cash prize if he or she can tell the difference between the good and bad singers, without ever hearing them sing a note.  Their decisions are based on the so called singer’s “look”, along with how they answer a few questions.  That said, If I’m ever on the show I want Skylar Rogers to be the singer I have figure out for the $100,000 prize.  After just one look at the “look” of this stunning, stylish, statuesque, and sultry lady I wouldn’t even need to ask her the questions.  My immediate answer would be “This lady can sing and you can take that to the bank!.”

Vocally, lyrically, and musically, the scorching opening track wastes zero time establishing that sass and swagger will undoubtedly be widespread…..and I’d expect nothing less.  As Skylar proclaims that she’s a “Hard Headed Woman” it starts out as boasting but eventually turns to lamenting.  As is often the case, the words hard headed and lonely can eventually become synonymous.  With a torrid rhythm going on behind him, Steven’s ruthless guitar leads elevate the the tracks intensity several notches.

“Going Back To Memphis” is something that anyone who has ever been there before looks so forward to doing again…..and often.  Sadly, that’s not quite what Skylar’s thinking.  You see, when she gets there she has no idea what she’ll find, but if she doesn’t leave she’ll surely lose her mind – she just needs to escape.  This is another smoker featuring more stinging guitar leads with Jerry and “Disco Fuzz” pounding out monster rhythm.

On this melancholy ballad, Skylar claims to have failed in everything in her life except for one thing.  However, with that one thing being love, her life is far from a “Failure”.  With the band in a real laid back mode behind her, Skylar shines on this absolutely beautiful vocal presentation.

Referring to the title track, there’s a cute comment on the one sheet that the song “may or may not be autobiographical”.  Only Skylar knows the answer to that but since she was proud about being a hard headed woman, I’m thinking she could very well be that “Firebreather” she’s singing about.  If not, the way the guys are aggressively fanning the flames with a fierce rhythm and scorching, mind and note bending guitar leads, they’ll make her one.

“Drowning” starts off with a most delicate piano lead by Pete, very soft yet stinging guitar leads by Steven, and slow mournful vocals by Skylar that will have you wanting to just sit back while letting the song carry you away for the next six minutes.  That said, before you do – put on your seat belts.  Now that I’ve aroused your curiosity you’re just going to have to hear the rest for yourselves.

To find out more about Skylar Rogers just go to her website – www.skylarrogers.com – – Peter “Blewzzman” Lauro