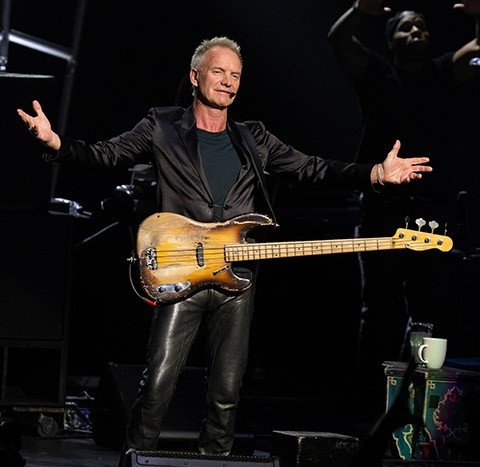 Gordon Matthew Thomas Sumner, known professionally as Sting, has come a long way since his first concert in South Florida on May 4, 1979, with his music group, The Police, at Fat Cats Club on 441, in Hollywood, Florida. They were promoting their first album, Outlandos d’Amour, and only a few hundred people attended. This was when concerts were only $5. Luckily, I was one of those few people and it was a real treat seeing this new wave band in a tiny club, up close with their unique and fresh hits, “Roxanne,” “Can’t Stand Losing You,” and “So Lonely.” It was clear right from the start they were rising stars bound for superstardom. Since then, The Police sold over 75 million albums and their last album, Synchronicity, hit number 1 in 1983 before they disbanded in 1986 (except for their Reunion Tour in 2007-2008). However, Sting was only getting warmed up and has had tremendous success also as a solo artist, musician, singer, songwriter, and actor. He even wrote the music for the musical The Last Ship and had a collaboration album with Shaggy that received a 2019 Grammy for best reggae album, making him a 17-time Grammy Award winner. Sting returned to the Hard Rock Live on May 22, 2022, after last playing there on November 9, 2019, with his arm in a sling due to a torn tendon.

His son, Joe Sumner, opened this show solo, with just his electric guitar and his own songs. Joe’s voice sounds very much like Sting’s and he also looks a lot like him. Joe has been fronting a rock band called Fiction Plane for years and did a pleasant warmup job with his humorous songs, but the star was most definitely his father. The crowd exploded with excitement when Sting came out looking spectacular and singing the popular Police song, “Message in a Bottle.” He was dressed in tight black leather pants, a black t-shirt, and a shiny black satin jacket on the perfectly lean and fit body, that Sting is famous for. His arms are a work of art and his hair was stylish and spiky short. For 70 years old, it’s hard to imagine him looking any better.

What is striking though, is how good his voice sounded. Other artists, younger than him, have been struggling with vocal problems lately, so it was nice to hear Sting sounding just like the old Sting. By the way, he was nicknamed “Sting,” when he was 17, by one of his Phoenix Jazzmen bandmates because of the black and yellow striped sweater that he often wore that made him look like a bee. His entire family calls him Sting and he does not answer to Gordon.

Sting’s current tour, named MY SONGS, is just that. It’s a collection of some of his many hits from his days in The Police and his brilliant solo career, plus he is introducing his latest solo album, The Bridge. Knowing that most people don’t always like new songs, he 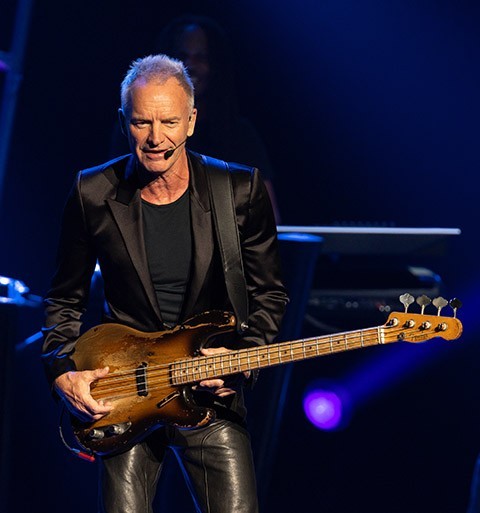 jokingly said he has some bad news… that he was going to play some new songs, love songs in fact, that he wrote during the pandemic. The new songs were “If It’s Love,” “For Her Love,” “Loving You,” and “Rushing Water.” He joked that he wrote them in his little house in England, then he pauses and says… actually a castle. He also asked, “Know why I like it here? Because everyone looks like they just had sex.” The audience was eating it all up and Sting looked pretty satisfied as well. He has been accused of knowing how good he is. Well…he should be able to bask in his popularity, as he has worked hard to get to where he is, so I disagree with the critics that think he is too smug. He was very relaxed, personable, and funny. His enthusiasm was infectious. He told the audience how, in addition to wanting to be a musician, he was obsessed with being a cowboy, so it gave him great joy when two country artists covered his songs. The first was Toby Keith, who covered “I’m So Happy I Can’t Stop Crying” and the second was Johnny Cash, who covered “I Hung My Head.” Sting went on to sing both songs and explained how he loved Hank Williams and Bonanza as a young boy. Telling little stories that explained the songs was insightful and warmed the crowd up. He explained how there is a college game where the students line up shots and take one shot every time he sings the name Roxanne in his song, so he laughed that it was sung about 17 times.

Some song highlights were a blazing “Roxanne,” a supercharged and punky “So Lonely,” and a fresh and perky “Brand New Day.” All the other hit songs sounded great, like “Every Little Thing She Does Is Magic,” “Every Breath You Take,” and “Wrapped Around Your Finger.” For Sting’s song “She’s Too Good For Me,” from his Ten Summoner’s Tales album, his son joined him on stage and they rocked it together. The sound at The Hard Rock Live is always top-notch. As for his band, the father and son team on guitars, Dominic and Rufus Miller were excellent. Dominic has been in the band since 1991, and his son Rufus joined in more recent years. Sting played his well-worn bass for most songs. Kevon Webster on keyboards added much, as did Shane Sage on harmonica. Sting introduced Shane and asked him if he was up to the task of playing the harmonica part that Stevie Wonder had played on the record, and he said “Hell yeah!” Male backup singer Gene Noble on vocals practically stole the show when he had a duet with Sting on “Shape Of My Heart.” Female backup singer Melissa Musique was wonderful as well. Zach Jones on drums completes this fine band that complements Sting so well. 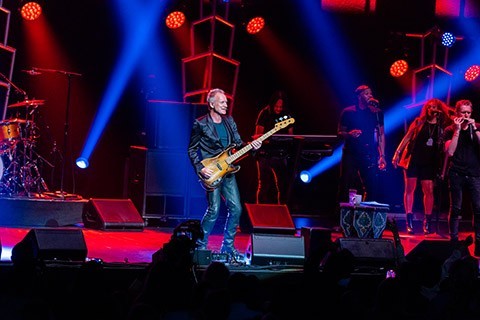 An eight-night Las Vegas residency in June and then an extensive European tour lies ahead for Sting, with only a few dates in the northeast and Canada in September.

Sting’s custom is to end the show with a thoughtful song, so he ended the show with “The Bridge” from his latest album. Lots of messages but nothing that remarkable or memorable about his new songs musically. It’s a jazzy blend of bland adult music with not enough interesting hooks. Love is the bridge is his message, but the album makes nice background music, not much more. As for the concert, a little less than two hours of Sting and it was over but he left a very satisfied audience who got their money’s worth…and we’re not talking about $5 concerts anymore. This sure ain’t 1979.