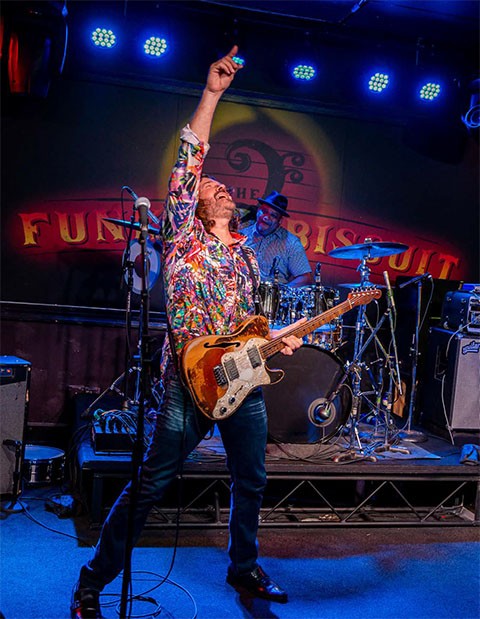 Review of Tab Benoit’s Show at The Funky Biscuit

At a time when many live music shows continue to be cancelled, and musicians are frequently hesitant to play, those in South Florida are lucky enough to have the Funky Biscuit, which has been devoted to continuing to offer performances with safety measures in place. Last Monday and Tuesday the Biscuit featured two shows by the incredible Tab Benoit, who has been one of the first blues musicians to return to nation-wide touring. Although he had played at the Biscuit relatively recently, that did not stop his devoted fans from racing to purchase tickets as soon as they were available, with some audience members flying in from other states just for this opportunity. As usual, Benoit did not disappoint.

Shows on both days began with a set by Josh Garrett, who is one of the newest additions to Benoit’s record label, Whiskey Bayou Records. With a string-bending guitar style that is similar to Benoit’s, and an excellent singing voice, Garrett earned many new fans after his Boca Raton performances. And, as with other Whiskey Bayou Record artists, he was backed by Corey Duplechin on bass and Benoit playing what was really his first instrument, the drums. Three songs from the Garrett sets stood out as particularly exceptional: “Worried Life Blues” (the only cover song he played), and two of his originals, “Damn Shame,” and “Come Back to Me.” The latter offered the audience the opportunity to hear more of Duplechin’s voice, as it blended nicely with Garrett’s during the chorus, and is a song that will be featured on Garrett’s soon-to-be released Whiskey Bayou album.

With no signs of fatigue after having just played drums vigorously for the opening act, Benoit returned to the stage, along with Duplechin and Terence Higgins on drums. With his eyes mostly closed, Benoit threw his entire body into his guitar playing, providing a vicarious emotional release for those who watched. As always, he played without pedals and the pure and beautiful sound of his guitar was only surpassed by his distinctive vocals, which somehow seem to get even better every year. Benoit delivered the songs most requested by the audience, with almost no overlap between the two nights. Having played together so long, the trio’s familiarity with each other was evident, and when Benoit playfully tried to “trip up” Duplechin on night two with sudden stops in the melody during “Sac Au Lait Fishing”, Duplechin seemed to accurately predict each one. The mood then turned more emotional for magnificent renditions of “Darkness” and “These Arms of Mine.” The audience was also treated to a few humorous stories by Benoit each night, which is always a hoped-for bonus. 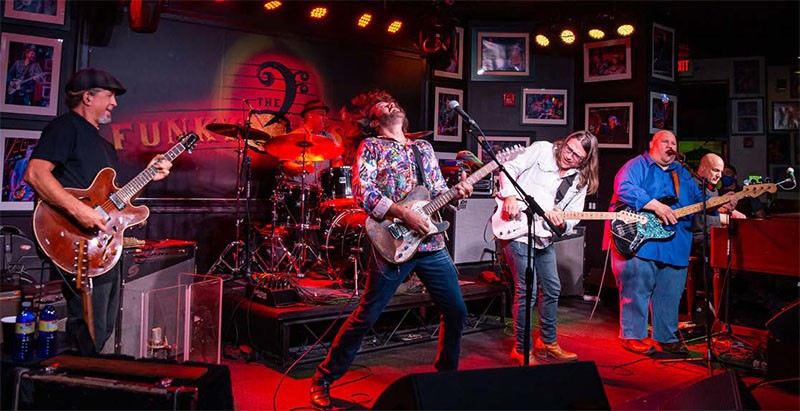 One of the best parts of live music shows are the unrehearsed collaborations when guests join the featured band. On night one, Benoit was joined by Funky Biscuit owner and keyboard player, Al Poliak, for “Little Girl Blue,” and by Poliak, Garrett and surprise guest, JP Soars for the encore, “Night Train”. On night two, Poliak initially joined Benoit for “Solid Simple Things” and “These Arms of Mine.” The second night also included an extra-long version of “Medicine,” featuring an impressive bass solo by Duplechin, and a rare drum solo by Higgins. And then Poliak and Garrett joined Benoit for a double-encore consisting of “I Put a Spell on You,” and “Night Train,” resulting in nearly three full hours of amazing music. After these two outstanding performances, there is no doubt Tab Benoit’s fans will once again race to purchase tickets as soon as they become available for his next return to South Florida.